U.S. Roman Catholic bishops, at their first assembly since gay marriage became legal nationwide, vowed Monday to uphold marriage as only the union of a man and a woman and to seek legal protections for those who share that view.

Some bishops said they were committed to reversing the U.S. Supreme Court same-sex marriage ruling last June. Archbishop Joseph Naumann of Kansas City, Kansas, said a concerted effort was needed to “build a consensus” to do so. As a model, he pointed to new state laws that have made it harder to obtain an abortion, even as the procedure remains legal nationwide.

“I don’t think because five Supreme Court justices changed the public policy on such a fundamental issue that we should just accept it. I think we have to be as strong as we have on the pro-life issue,” Naumann said at the gathering of the U.S. Conference of Catholic Bishops in Baltimore.

Bishop Robert Baker of Birmingham, Alabama, said the bishops should join other religious groups in working to protect government workers who refuse to participate in same-sex weddings. The bishops have not said specifically what kind of conscience protections they support for civil authorities.

“I hope we will not back away from that advocacy,” Baker said.

Archbishop Joseph Kurtz, president of the bishops’ conference, highlighted the bishops push for religious exemptions for charities, schools and individual for-profit business owners who oppose gay marriage and other laws and regulations.

Dozens of U.S. dioceses and Catholic nonprofits are suing the Obama administration over the birth control coverage requirement in the Affordable Care Act. President Barack Obama created an accommodation that requires insurers to provide the coverage in place of objecting religious nonprofits. The bishops and other faith groups said the change did not go far enough. The Supreme Court recently announced it was taking up lawsuits challenging the accommodation, with arguments scheduled in March.

“What a great tragedy it will be if our ministries are slowly secularized or driven out of the public square because of short-sighted laws or regulations that limit our ability to witness and serve consistent with our faith,” said Kurtz, of Louisville, Ky.

The bishops’ meeting came just days after the Islamic extremists attacked Paris. U.S. bishops said they were praying for victims of the violence and renewed their commitment to resettling Syrian refugees, as some U.S. governors threatened to stop accepting them. American dioceses have a vast network of charities that help resettle refugees.

Still, religious liberty and marriage were the focus of the gathering Monday, the first of two days of public sessions. Among the issues they discussed was how they should include children of gay parents in church life. Last week, the Mormon church sparked a backlash with new, strict limits on participation in church rites by children with same-sex married parents.

The bishops’ conference also heard an address from Archbishop Carlo Maria Vigano, the Vatican’s U.S. ambassador who was behind Francis’ controversial meeting with Kim Davis, the Kentucky clerk who briefly went to jail rather than comply with a court order to issue same-sex marriage licenses. 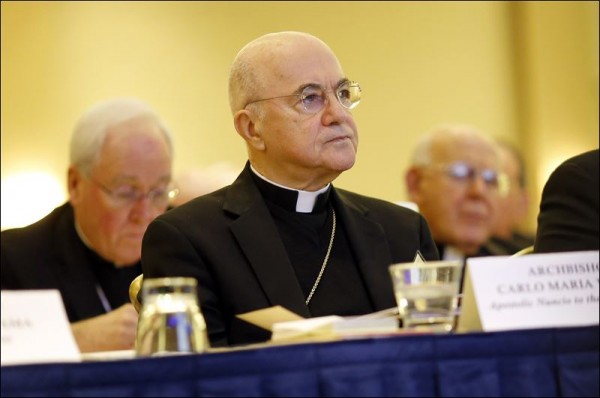 Vigano had invited Davis to be among those greeting the pope in the Vatican embassy in Washington last September during Francis’ visit to the country. Her lawyer caused an uproar when he announced the meeting soon after Francis returned to Rome, describing it as a papal affirmation of Davis’ approach to conscientious objection. The Vatican insisted the meeting was not an endorsement and said she was one of several dozen people who had greeted Francis. The U.S. bishops’ conference has never commented on the meeting.

In his speech Monday, Vigano urged the bishops to persevere in working to “preserve a moral order in society” and said they should not “fall prey” to “secularized and increasingly pagan” practices in broader society. He said Catholic colleges and universities, specifically those founded by Jesuits, should do more to shore up Catholic identity at the schools.

The ambassador received two standing ovations from the bishops. He turns 75 in January, the age when bishops are required to submit their resignations to the pope.