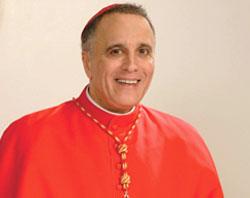 The mandate would undermine the good of women and children and the consciences of heath care providers, one leading bishop said.

“Pregnancy is not a disease, and fertility is not a pathological condition to be suppressed by any means technically possible,” said Cardinal Daniel DiNardo of Galveston-Houston, chairman of the U.S. bishops’ Committee on Pro-Life Activities.

The health care legislation passed in 2010 directed the Obama administration to create a list of preventive services for women that all new health care plans must cover without deductibles or co-payments.

In response, a committee of the National Academy of Sciences’ Institute of Medicine drafted non-binding guidelines in a year-long review conducted at the request of Health and Human Services Secretary Kathleen Sebelius.

The committee recommended “the full range” of federally approved contraceptives and sterilization procedures.

Cardinal DiNardo noted that the Institute of Medicine committee said it would have good reason to recommend mandatory coverage for surgical abortions, if such a mandate were not prevented by law.

“I can only conclude that there is an ideology at work in these recommendations that goes beyond any objective assessment of the health needs of women and children,” he said in a July 19 statement.

Planned Parenthood, the cardinal said, is “celebrating” the report, and if the HHS implements its recommendations it will violate the “deeply-held moral and religious convictions of many.”

For its part, the Institute of Medicine “missed an opportunity to promote better health care for women that is life-affirming and truly compassionate,” he added.

Americans United for Life also opposed the proposal, saying it would fund the abortion-inducing drug Ella.

Anna Franzonello, staff counsel for Americans United for Life, on July 20 said that her organization had warned about the possibility of funding abortion and abortion-causing drugs through the health care legislation’s mandate before its passage.

The pro-life group’s concerns are heightened by the Institute of Medicine’s invitation to abortion advocacy groups, including Planned Parenthood, to help form its recommendation.

The group charged that Planned Parenthood stands to gain financially from the mandate.

Americans United for Life called on the Department of Health and Human Services to “respect the conscience rights of Americans” and honor Sen. Barbara Mikulski’s (D-Md.) promise that the mandate would be used to prevent diseases.

Cardinal DiNardo said the threat to consciences makes it “especially critical” for Congress to pass the Respect for Rights of Conscience Act, which would forbid federal requirements that make health plans require providers to provide items or services which violate religious beliefs or moral convictions.