The man who will become the new Archbishop of Philadelphia in September, Charles Chaput, came out swinging against same-​sex marriage equality today, suggesting that marriage between persons of the same gender is wrong because children need to know that their parents love them, and, somehow, same-​sex marriage denies children the knowledge that their parents love them. Chaput, the first Native American Archbishop, is heralded as an intellectual Evangelical leader. Chaput’s predecessor, Justin Rigali, and his predecessor, Anthony Bevilacqua have both been accused by a grand jury of covering up sexual abuse. 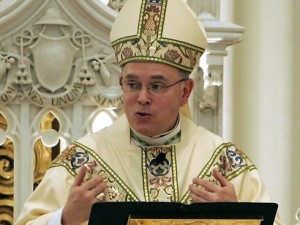 “As children, if we don’t know that our parents love one another, our lives are very unstable. That’s why I think every child deserves a family where the father loves the mother, and the mother loves the father,” Chaput says, illogically, regarding same-​sex marriage. If a child grows up with two fathers or two mothers, how will they not know they are loved by their parents? Typical religious attempt to de-​legimitize same-​sex headed households.

“This is the issue of our time,” Chaput adds, speaking of “gay marriage,” in an interview published today in the National Catholic Reporter. “The church understands marriage as a unique relationship, with a unique definition, which is the faithful love of a man and a woman for each other, permanent, and for the sake of children. As children, if we don’t know that our parents love one another, our lives are very unstable. That’s why I think every child deserves a family where the father loves the mother, and the mother loves the father. For us to redefine marriage as anything else undermines that notion. I think it’s very important that the church keep insisting on this.

“What we’re doing here is promoting marriage and the meaning of marriage, not condemning others. The church does believe that human sexuality has a meaning in itself, that it’s about love and procreation. Any other sexual relationship is contrary to the Gospel, and so a relationship between two people of the same sex is not in line with the teachings of the church and the teachings of the Gospel, and is therefore wrong. That said, we should always respect people who do things contrary to the Gospel. We live in a society where different ways of life are accepted by the general community, and it’s important for us to live in a way that’s not hostile to people.

“We have a duty as Catholics, however, to speak clearly about God’s plan for human happiness. Part of that plan is traditional, faithful, Catholic/​Christian marriage.”

Once again, the Catholic Church is in direct contradiction with its congregants.