OTTAWA – A disgraced Roman Catholic bishop betrayed little emotion Thursday as a court was told his laptop contained hundreds of pornographic images of young boys — including photos of torture.

Raymond Lahey was in an Ottawa court for sentencing in a child-porn case that has rocked his former Nova Scotia archdiocese of Antigonish. 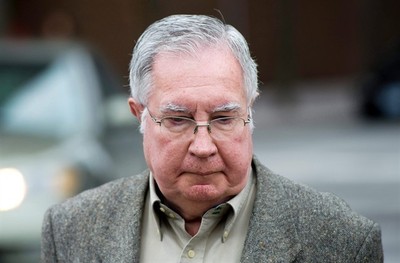 The 71-year-old cleric pleaded guilty in May to importing child pornography and voluntarily went to jail to begin serving time even before a formal sentencing.

A second charge of simple possession remains against Lahey, but it is expected to be withdrawn as part of the plea deal when he is formally sentenced later this year.

Close to 600 photos, mostly of young teen boys, were found on Lahey’s Toshiba laptop and a handheld device when he was stopped at the Ottawa International Airport in September 2009.

“Some of them were quite graphic,” Det. Andrew Thompson said. “There were images of nude boys, but there were also torture and stuff like that.”

As Thompson answered questions from the witness stand about the contents of Lahey’s laptop, the bishop sat quietly, his right hand trembling slightly as he ran his index finger along his mouth, chin and the cleft between his nose and upper lip.

He was dressed in a grey sport coat, khaki pants and a tan shirt with the top few buttons undone. He wore glasses and his grey hair was neatly combed and gelled.

Thompson told the court some content on Lahey’s laptop ranked among the worst he has seen during the course of what he estimates are between 50 and 300 child-porn cases.

“They’re right up there,” he said. “I mean, it doesn’t depict infants but the explicit images of torture are disturbing.”

A support group for clergy-abuse victims called the Survivors Network of those Abused by Priests urged the judge to give Lahey a tough sentence.

“We urge the magistrate presiding over this sentencing hearing to give Lahey a stiff sentence and send a message to pedophile clerics in Canada and abroad that child abuse will not be tolerated,” the group said in a release.

“Kids are safest when child predators are jailed, so we sincerely hope that Lahey is put behind bars, and we urge anyone who was a member of the Antigonish diocese who saw, suspected, or suffered these crimes to come forward and tell their story to civil — not church — authorities. Please remember that there is no greater weapon for a pedophile than silence.”

Lahey is scheduled to return to court in December. His lawyer, Michael Edelson, has asked the judge to reschedule that appearance for an earlier date