This month the campaign to allow women bishops in the Church of England could clear another hurdle.

Supporters are surprised and encouraged by the backing it has been getting in the Church’s regional councils, or synods. 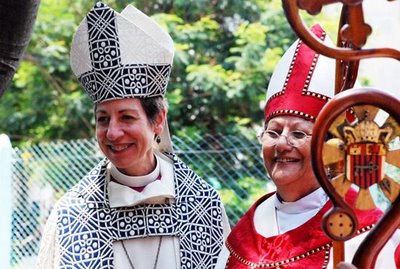 “We were expecting positive votes but the overwhelming majorities have been more encouraging than we expected,” says Helena Jenkins, a parishioner of St Luke’s church in Sevenoaks, Kent.

“I like to think it’s the Holy Spirit moving, because I just feel so strongly that this is the right way for the Church to go,” says Ms Jenkins, a member of the campaign group Women and the Church.

“And I think even some people who have difficulty with the idea of women in ministry have been listening perhaps more than they were.”

The measure needs the approval of half the synods of the Church’s 44 dioceses before it returns to the General Synod, which could take a final vote on the measure next July.

This month 16 more dioceses will vote, and it is hard to see the women bishops measure not picking up the six it needs.

Jim Cheeseman thinks not. A parishioner of St John’s Anglo-Catholic parish in Sevenoaks, he is a member of the General Synod, and of the Rochester diocesan synod which will vote on 15 October.

The women bishops law needs two-thirds majorities in each of the General Synod’s three Houses – Bishops, Clergy and Laity.

“I would think probably 40% of the House of Laity are against,” says Mr Cheeseman.

Deadlock remains over attempts to provide for those parishes who object to women bishops on principle.

The proposed legislation as it stands allows for the bishop of a diocese to appoint a stand-in male bishop to look after a parish opposed to women bishops.

Opponents say accepting a bishop (even one who shares their Anglo-Catholic or Evangelical views) appointed by a woman diocesan bishop would mean accepting her authority.

They want the stand-in bishops to derive their powers from the law itself, and not from the bishop of the diocese.

Supporters of women bishops say that is unacceptable because it means a woman would be a “second class bishop” without control in her own diocese.

The diocesan synods have mostly backed that view – but two (Sheffield and Manchester) have passed a “following motion” calling for the stand-in bishops to have independent authority.

A compromise amendment by the Archbishops of Canterbury and York on “co-ordinating the exercise of episcopal ministry” was backed by the bishops and laity in the General Synod last year, but beaten in the House of Clergy.

The House of Bishops has the power to amend the legislation to reintroduce something similar before the General Synod votes again.

This would cause many months of delay and be unpopular with supporters of the proposed law.

But the Reverend Angus MacLeay says some might welcome it if it means means “that they can much more easily get over the two-thirds hurdle”.

Mr MacLeay is rector of the large Evangelical parish of St Nicholas, Sevenoaks, a member of the General and diocesan synods, and a trustee of Reform, the conservative Evangelical group which opposes women’s ordination.

“If a substantial minority were saying we need to slightly rethink this I think that ought to weigh heavily with the House of Bishops and I think also with General Synod,” he says.

For Helena Jenkins such a proposed compromise “creates a sensation of second-class ministry which I think would be very damaging… the compromise position wouldn’t feel right to anybody”.

How will opponents react if the law goes through as it stands?

Jim Cheeseman thinks there is little desire among the remaining Anglo-Catholics to rush to join those who have already joined the Roman Catholic Church.

“My counsel is always patience. It’s one thing having a law; it’s another thing it actually affecting you,” he says.

But he warns that not giving parishes opposed to women bishops the provision they want “would give the impression that we’re not wanted in the Church”.

If there is no compromise, he says: “I fear that the Church of England will not be financially viable.

“Parish share (the contribution parishes make to general church funds) is voluntary. There’s not a legal requirement to pay.

“You can’t expect people to be united in mission and giving if they feel they’re not wanted.”

Angus MacLeay also thinks any crunch moment for opponents of women bishops in
Sevenoaks would be far in the future. Rochester welcomed its new bishop, James Langstaff, only last year.

“I’m certainly not wanting to leave the Church of England. I’m intending to stay – but it just makes things more difficult, a requirement to accept this particular change,” says Mr MacLeay.

And if the proposed legislation fails? “I think I would be sad,” says Helena Jenkins. “But I’d still want to go on working for it.

“We have some very able women in the Church of England who I think would make superb bishops.”