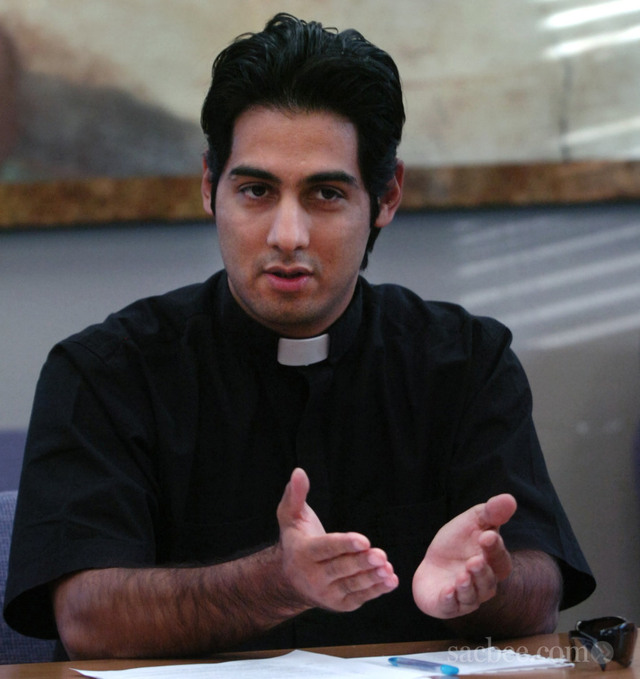 Ojeda, who served in Woodland from 2007 to 2009, was later transferred to Redding. He did not enter a plea in the brief proceeding in Sacramento Superior Court, according to the Bee.

He spoke only to confirm his name, and to confirm that he knew the identity of his accuser, whose name is not being released.

About a dozen supporters showed up on Ojeda’s behalf, the Bee reported.

Ojeda surrendered to Sacramento police Wednesday night. He is accused of lewd and lascivious acts with a 14-year-old girl on four different dates in 2007 and 2009.

Ojeda’s attorney, Jesse Ortiz, asked that people “not make any judgments on this case until all the facts are known.

“Father Ojeda is a good man who has dedicated his life to helping people,” he said.

On Thursday at a news conference Sacramento Bishop Jaime Soto stressed the diocese’s quick response to the allegations, which he said were brought by the family of the alleged victim on Tuesday.

Ojeda was one of the youngest priests in the diocese, and was hailed as a key link between the church and the Hispanic community in a 2007 profile in The Sacramento Bee. The newspaper reported that he tended to Latino Catholics at the hospital and in the farm fields, where he was recognized by his distinctive yellow truck with the image of Our Lady of Guadalupe on the back window.

Then a vicar at Holy Rosary Parish in Woodland, Ojeda was known for being involved in the community and offering free guitar and drum lessons to parishioners. He played bass in a church band, wore Converse tennis shoes and likes Spider-Man comics, the Bee reported.

Ojeda came to Woodland in August 2007. At the time he told The Democrat he was one of 475 men to be ordained to the priesthood for service throughout the United States in 2007.

He was ordained June 29, 2007, at the Cathedral of the Blessed Sacrament in Sacramento. He joined Holy Rosary Catholic Church for his first priestly assignment.

Ojeda was born in Point Pleasant, N.J., but grew up in Colima, Mexico. At the age of 18 he enrolled in Mount Angel Seminary in St. Benedict, Ore., where he spent four years studying for his Bachelor of Arts degree, and a further four obtaining his Master of Divinity degree. He spent another year studying English, followed by a yearlong internship at the Cathedral in Sacramento.

Soto said the family of the alleged victim approached the diocese on Tuesday and church officials immediately contacted Child Protective Services and Sacramento police. He said the diocese has offered to help the family.

The bishop said the diocese wants to encourage any other potential victims to come forward and that it will make announcements in parishes where Ojeda has served, including Redding and Woodland.

“Anyone who believes that they have been a victim of Father Ojeda or other abuse needs to contact the diocese,” Soto said.