The death throes of the latest Australian Catholic cause célèbre are being played out over the next few days. 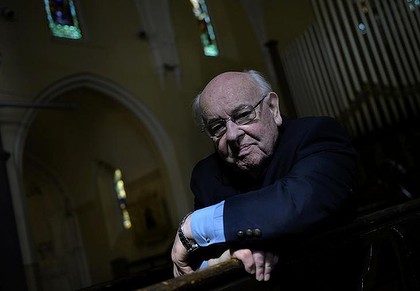 Yesterday was Father Bob Maguire’s last Sunday Mass at his beloved St Peter and Paul’s Church in South Melbourne. The place was packed to the gunnels as usual. On Wednesday, he will be made to retire and be relocated, much against his will and the will of his parish, which fought the dismissal with a Jesuitical doggedness. The parish community, led by the local council’s deputy mayor, Frank O’Connor, still failed to move the stony heart of Archbishop Denis Hart.

Father Bob is one of three priests sacked in recent years. While he has passed the retirement age for priests, hence his removal, Bishop William Morris of Toowoomba was made to leave last year for merely raising the issue of the ordination of women. And before that, Father Peter Kennedy got the chop from St Mary’s of South Brisbane for breaching church rules.

These beautiful men are the sacrificial lambs as an ancient faith battles to accommodate modernity. Social change has been a post-war challenge for many institutions and Catholicism, through Vatican II, the Papal encyclical Humanae Vitae, the sex abuse scandal and now the banishment of Father Bob, lurches one step forward and two back into this third millennium.

What is the import of this dispute? Will Father Bob become a forgotten man in a tiny local battle in a small corner of the world or will he become a powerful metaphor that helps the Church grapple with change? Will this parochial stoush become a global touchpaper? Only time will tell.

Father Bob is 77. He is not just a national media figure with a show on ABC radio station Triple J, 55,000 followers on Twitter, appearances on SBS television guru, but he is also famous for his welfare work with the Open Family Foundation. He is the most celebrated Catholic in the country and yet he is being forced from office. That is because he is also a constant challenge to the leadership in a faith where the notion of obedience is enshrined in the idea of the apostolic succession. Obedience is at the heart of his organisation and his vows.

The core of this debate was alluded to in November when Father Bob argued that this act of retrenchment was vengeance against a ‘‘Cafeteria Catholic’’ by Cardinal George Pell. The idea of the ‘‘Cafeteria Catholic’’ was first raised in America the 1970s and is a pejorative term that decries those Catholics who dissent from orthodoxy, by implying they choose their views as one chooses a meal in a cafeteria. There are Catholics now who, rather than follow the line from Rome on the controversial issues, desire the freedom to choose.

The Australian version of ‘‘Cafeteria Catholicism’’ was recently spelled out by Cardinal Pell when he travelled to Cork, Ireland in August last year.
His Eminence divided the Catholic world into two – ‘‘authentic’’ and ‘‘cafeteria’’ Catholics. This dichotomy is to be found in all organisations for there are always conservatives and reformers in every assembly. ‘‘Cafeteria Catholics’’ is a delightful jab at one’s foes. Somehow food is the perfect put down. One only has to think of Chardonnay Socialists, Latte Lefties and now Cafeteria Catholics.

However, cafeterias are also places where people engage in life. They are not posh. They are not sinful. They are vibrant hubs where humans congregate and thrive. That His Eminence would view the word ‘‘cafeteria’’ as a put down indicates a willingness to take his faith to the margins of Australian society rather than sacrifice his religious purity.

So it is a shame to see the promotion of change resistance when change so obviously beckons. The ‘‘Cafeteria Catholics’’ like Father Bob are derided as liberal Christians who ‘‘give to priority to the contemporary understandings’’. The Pell Doctrine appears to favour a religiously pure Church even if that means smaller numbers and getting rid of Father Bob.
So this is not just a local battle on the age of a retiring priest. It is a fundamental and globally significant difference of the view of change and modernity in the largest denomination in the world.

Despite this significance, lest we forget that it also is an act of cruelty to evict an elderly man and his beloved dog, Franklin, from their home.
What is your view?

Should the godless care about how slowly venerable faiths take to modernity?
Is the failure of churches to embrace change a cause of sadness or an opportunity for atheism?

Are Cardinal Pell and Archbishop Dennis Hart the best things that ever happened to Australian atheism?

Is the tale of the Bobster an irrelevant local issue or a metaphor of historic significance?
Over to you . . .