To the Vatican, Donna LeMaster Rougeux, a married mother of three who works as a hospice chaplain, is part of a revolt. 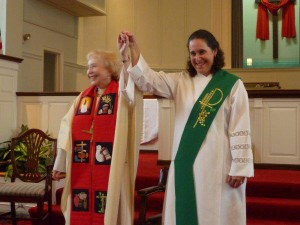 But Rougeux and others believe she is following a spiritual calling.

Rougeux, 52, was ordained through the Association of Roman Catholic Women Priests on Saturday in Lexington, becoming one of only two such female priests in Kentucky and 130 in the world.

Bridget Mary Meehan, a bishop with the same association who presided over the ceremony, called it part of a “new spiritual uprising in the church.”

“It’s part of a big justice movement that recognizes we all are images of God,” Meehan said.

The church’s position is that only men can be ordained. That’s not sexist, but biblical, said Tom Shaughnessy, spokesman for the diocese.

As Pope John Paul II pointed out, “if the church is faithfully to follow the example of Jesus, who chose twelve men as his first priests/bishops, then the Roman Catholic Church is not free to ordain women,” Shaughnessy said in a statement.

Rougeux chose automatic excommunication when she was ordained a deacon earlier, according to the church’s position.

Rougeux and others involved in the women’s ordination movement, however, don’t acknowledge the excommunication.

“We believe the church is the people of God,” not the male-dominated hierarchy, said Janice Sevre-Duszynska of Jessamine County, who in 2008 became the first Kentucky woman ordained as a priest.

The controversy over ordaining women is part of a larger debate in the church over the role of women, the propriety of contraception and other issues.

This year, for instance, the Vatican strongly criticized the nation’s leading organization of nuns, the Leadership Conference of Women Religious, for not speaking strongly enough against ordination of women, among other things, prompting a show of support for the nuns.

And debates over issues such as whom to ordain are not unique to the Roman Catholic Church.

People who support ordaining female Roman Catholic priests say it is a step toward correcting centuries of incorrect teaching and practice by the institutional church, based on misogyny.

One of the Scriptures read at Rougeux’s ordination ceremony at the Unitarian Universalist Church of Lexington was from the Gospel of Luke, about Jesus healing a woman who had been unable to stand up straight for 18 years.

“The institutional church is trying to keep women bent over when it refuses to recognize our call to priesthood,” Meehan said in her homily. “Women are silent, and invisible, and subordinate no more.”

People involved said the communities involving women priests use male and female images of God and inclusive language and liturgies.

Part of the goal is to “de-clericalize” and create a community of equals, Meehan said.

“Christ calls both men and women to the priesthood,” said Sevre-Duszynska. “When it’s in you, it’s there. It doesn’t leave.”

Rougeux said the call to ministry was definitely in her.

She grew up in the United Church of Christ but converted to Roman Catholicism in the 1980s. She taught in a Catholic school, then she said she felt a pull to attend seminary, and finally a call to ministry.

She found out about the women priest movement on the Internet.

“It’s like God has revealed it one step at a time,” she said.

Rougeux has a degree in pastoral studies from Lexington Theological Seminary, has completed additional work in clinical pastoral education, and is a chaplain at Hospice of the Bluegrass.

“I think I bring a whole other bag of experiences to helping people,” she said. “I think we are all needed.”

Rougeux said she wants to help the community of like-minded Catholics grow in Lexington.

“I want them to grow together as a community of God helping the world,” she said.

Rougeux said she was excited to be part of the movement to reform the church.

“I think my granddaughters are going to look back at this and think history was being formed.”