Several months ago, Kathy Schuck’s 15-year-old daughter posed a question that seemed innocuous but that became a call to action.

The gist of Ann Schuck’s question: Why did girls and women seem to be less important than men in their church, St. Rose of Lima in North Wales?

Kathy Schuck, 56, of Blue Bell, said she had long felt women were confined to secondary roles in the Roman Catholic Church, where she did not hear a message of inclusion. The hierarchy and exclusion of the voices of the lay members troubled her, she said. So, after 15 years, she left her parish.

“It disturbed me that the hierarchy of the Roman Catholic Church uses a term like ‘radical feminism’ to . . . categorize any woman who wants to have a voice in the church when that voice is not in total compliance with doctrine and orthodoxy,” Schuck said. “It was clear to me that my lack of action reinforced that that behavior was acceptable – and it isn’t.” 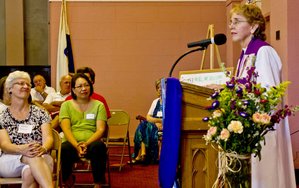 On Sunday, she joined more than 50 others belonging to the St. Mary Magdalene Community in celebration of its fifth anniversary. The group is led by two Roman Catholic female priests not recognized by the Vatican. Sunday’s celebratory service was held in rented space at the Drexel Hill United Methodist Church.

St. Mary Magdalene is one of several worship communities being led by women in 28 states, said Suzanne Thiel, president of Roman Catholic Womenpriests USA, a nonprofit group that prepares women for ordination and carries out the ceremonies.

“We provide spiritual comfort and solace for people who no longer find it in the Roman Catholic Church,” said Eileen McCafferty DiFranco, who was ordained in 2006 and who, along with her St. Mary’s co-pastor, is one of 113 female Roman Catholic priests, bishops, and deacons worldwide, according to Thiel.

At least eight more ordinations, which the organization maintains are valid, are planned worldwide by Christmas, Thiel said.

“We know the Vatican and the hierarchy are not happy with us,” Thiel acknowledged. “What’s important is the Catholic people have accepted us.”

Since 1976, the Vatican has been strongly reiterating that women are not full members of the Roman Catholic clergy after the Episcopal Church validated the illicit ordination in 1974 of 11 women in Philadelphia.

Then Pope Paul VI reminded Catholics that an all-male clergy was a “constant and universal tradition” of the Roman church because Jesus freely chose only men to be his apostles. By their “natural resemblance” to Christ, male priests also serve as the “sacramental sign” of him, the pontiff said.

Advocates of female clergy had long accused the church hierarchy of misogyny.

St. Mary Magdalene has drawn male and female members, some from as far as Delaware. In general, members said they did not feel fulfilled by their home Catholic parishes and sought a more intimate community with less hierarchy where their voices would be more valued.

“It’s all about intimacy. You can’t be intimate with a parish that has 2,000 to 3,000 members and no mechanism to get to know people on a deeper level,” said Judy Miller, 73, of Hockessin, Del., a member of St. Mary for three years with her husband, Chuck.

Schuck said she was welcomed, greeted by name, and introduced. “I was as comfortable as I was in someone’s home,” she said.

The St. Mary Magdalene Community has grown from 10 members to about 90, with a satellite community in Northeast Philadelphia, said DiFranco, who, along with being a priest, is a school nurse in the city. Services usually draw 30 to 40 members.

St. Mary members said that they enjoyed the congregation’s interactive homilies and that everyone was welcome to take communion. DiFranco said she doesn’t use prayers routinely heard in traditional Catholic Masses, opting instead for “non-sexist” prayers.

Maryrose Petrizzo, a member of St. Mary of Magdalene, said leadership opportunities were limited in her church in Wilmington. Among the positions she held was youth minister and eucharistic minister. “I could only do so much,” she said.

But at St. Mary Magdalene, she has led the liturgy and given the homily.

“That’s been so life-giving to be able to give a homily,” said Petrizzo, who has applied to be ordained.

After DiFranco’s ordination in 2006 in Pittsburgh, staff from St. Vincent de Paul in Germantown visited her and asked her not to show up for communion.

She preached on Sunday about following one’s dreams, much like women who have heeded the call to be priests.

“We succeeded in being priests in spite of the church,” she said after the homily. “Where human beings shut the door, God opens the window.”