Over the years, Patricia Patterson thought about joining protest marches in support of women’s rights or against war. But the cause that finally got her to take to the streets was nuns. 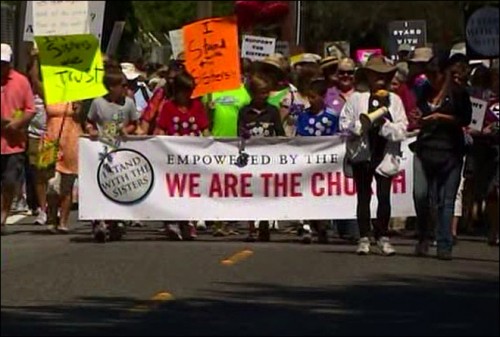 “It baffles me that a group of women who are among the … most compassionate are being, frankly, picked on by the Vatican,” Patterson said Sunday. She joined a throng of nearly 500 people who marched in support of the nuns’ group recently rebuked by the Catholic Church for promoting “radical feminist themes” at odds with official doctrine.

Patterson carried a picture of her aunt, a nun who had a major influence on her life. Other marchers carried flowers and sang hymns as they walked from Volunteer Park on Capitol Hill to St. James Cathedral, seat of the Archdiocese of Seattle.

But Seattle Archbishop J. Peter Sartain wasn’t home. He was in St. Louis for meetings with the Leadership Conference of Women Religious, an umbrella group that includes about 80 percent of women’s religious orders in the United States.

The Vatican put Sartain in charge of revamping the Leadership Conference to bring its practices more in line with Catholic orthodoxy.

After a four-day conference that concluded Friday, the nuns agreed to talk with Sartain but said they would not “compromise the integrity” of their mission.

Sartain praised the nuns’ work and contributions in a statement issued Saturday. “They deserve our respect, our support, our thanks and our prayers,” he wrote. He said he is committed to working with the Leadership Council in “atmosphere of prayer and respectful dialogue.”

Sister Cathy Beckley, who was cheered as she dashed back and forth in her red baseball cap, said the Vatican’s attack was hurtful to women who have devoted their lives to caring for people on society’s fringes.

In a report issued in April, Catholic Church officials chided the nuns and sisters for resisting some church teachings, including those that prohibit birth control and same-sex relationships.

Beckley, a Seattle social worker and member of the Sisters of the Holy Names of Jesus and Mary, said that when she worked on the streets with the poor and homeless, she never asked about their private lives.

Sunday’s turnout gave her hope that many Catholics agree with the sisters’ approach and value their service. “Clearly, a very significant segment of the church here in the U.S. and around the world is more progressive.”

Among their causes, the sisters of the Leadership Conference mounted a “Nuns on the Bus” tour this summer opposing cuts in federal spending for social and health services proposed by Wisconsin Rep. Paul Ryan — now running mate to Republican presidential candidate Mitt Romney. Catholic bishops also echoed those concerns.

Beyond politics, the split between the sisters and the Vatican reflects the struggle between Catholics who want the church to adapt to modern realities — such as the fact that the vast majority of Catholic women in America use birth control — and those who seek a more traditional path, several marchers said.

Christy Higgins, of Seattle, was a youngster in Catholic school when the Vatican II changes were adopted in the 1960s. She recalls her teachers trading their habits for street clothes, and she embraced the more open and inclusive outlook.

“The church is all of us, not just the Vatican, the bishops and the cardinals,” Higgins said, her shirt pinned with more than a dozen “I Stand with the Sisters” buttons.

The slogan is also the name of the Seattle group that organized Sunday’s march. “We were so upset about how the church hierarchy is treating the sisters,” said Gretchen Gundrum, a co-founder.

It’s easy for ivory-tower leaders — all of whom are men — to discount the hard decisions people face in their day-to-day lives, Gundrum said. “The nuns see the complexity. Morality is not black-and-white, no matter what somebody says.”

The same tensions have always been present in the Catholic Church, Gundrum added. Church leaders denounced Galileo for claiming the Earth revolves around the sun. They finally admitted he was right — nearly 400 years later.

“Our group hopes to shorten the amount of time it takes for them to come around,” Gundrum said.