Kate Kenna, a lifelong Catholic, career social worker and political progressive in Grand Forks, has mounted a reaction to news of a North Dakota bishop’s call to the faithful concerning voting. 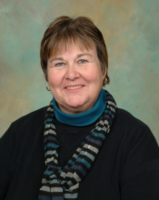 A letter from Bishop David Kagan of Bismarck is to be read Sunday from all the Catholic pulpits in the state urging them to not support abortion, stem-cell research or same-sex marriage when voting.

Kenna bought a “City Briefs” ad in the Herald with a short message: “The bishop is bringing politics to church. Please wear a political button to Mass on Sunday to support the candidate of your choice.”

Kenna also called Joel Heitkamp at KFGO radio in Fargo, who talked about it Thursday on the air.

And Kenna has organized a sort of demonstration Sunday at her own parish, Holy Family. She and others, including her friend Thomasine Heitkamp, will be standing with others outside the church to show their disagreement with the bishop. The Heitkamps are siblings of Democratic Senate candidate Heidi Heitkamp.

Kagan was appointed bishop in Bismarck in November and named apostolic administrator of the Fargo diocese this summer until a replacement bishop is announced.

It came to light the past week that Kagan sent a letter to all priests in the state to be read Sunday.

The bishop declined to release the letter pending its being read Sunday in churches. But he announced Thursday he will discuss the letter at 9 a.m. Tuesday on Real Presence Radio at 1370 AM in Grand Forks and 1280 AM in Fargo.

State Sen. Tim Mathern, D-Fargo, released the text of the letter and criticized it in a Forum Communications story Wednesday, saying it went over the line in directing Catholics how to vote.

Although Kagan’s letter does not mention parties or candidates by name, Mathern said it clearly was pointed at Democrats because of the party’s known support for the issues Kagan mentioned.

Plus, Mathern said the phrase used by Kagan telling Catholics not to vote for “the most likable” candidate appears to echo Republican ads referring to Heidi Heitkamp.

Kenna said that’s how she sees it, too, especially as a longtime close friend of Thomasine and Heidi Heitkamp.

Catholics are taught to follow their own conscience, she said.

“I think I have a perfectly formed conscience,” said Kenna, who credits growing up going to St. Michael’s Elementary School and St. James High School in Grand Forks. That’s led her to devote her life to social work and to support the Democratic party because she sees it as caring for people.

The church is a place where people of all political persuasions should feel welcome and be united in faith, not in politics, she said.

Christopher Dodson, executive director of the North Dakota Catholic Conference, a public policy and lobbying effort of the two dioceses in the state, agrees that partisan politics doesn’t belong in church. Nor does Bishop Kagan, who does not refer to any individuals or parties in his letter, Dodson said.

“There’s nothing new in the letter, it’s all Catholic teaching on how to form one’s conscience,” Dodson. His office has been sending similar messages to parishes in the state regularly since about Labor Day, he said.

The bishop’s reference to not voting for someone because they are “likable” reflects long-held Catholic teaching that the faithful should look at deeper issues than either pocketbook issues or a person’s personality, Dodson said. It’s not about Heitkamp or anyone in particular, he said.

“It’s not about influencing elections, it’s about the care of souls,” Dodson said. That’s why the bishop has been reluctant to discuss his letter before parishioners hear it themselves in church, not in a partisan debate on radio or television, Dodson said.

“People who are really involved in partisan politics get hyper-partisan around election time and everything they see gets interpreted through those partisan lenses,” he said. “I think parishioners will be pleasantly surprised when they finally hear the letter and see that it doesn’t deal with partisan politics.”

Kenna long has taken her faith and her politics seriously.

In the fall of 1968 at the height of the Vietnam War, a woman regularly stood across the street from St. James High School, holding a sign protesting the war, Kenna remembers. “She wasn’t allowed to come on the school grounds.”

A junior, Kenna invited the woman to speak to her current events class.

“I got suspended for three days,” she said with a laugh.

Now she feels she must react to the message from the bishop that she might be voting the wrong way.

“I think the bishop of Bismarck has brought this to a new level where he is bringing politics into church and as a responsible voter I have to say that’s wrong, and how do I respond that?” she said.

“I could stand up and walk out of church (while the letter is read) but I think that would be disrespectful to our priest,” she said.

Instead, she and others plan to stand outside Holy Family during Masses on Sunday.

Although she will wear a Heitkamp button, it’s not about campaigning, she said, adding she hopes many wear buttons of all sorts.

“I don’t think it’s a protest; I think it’s just an awareness-building exercise,” she said. “I just want people to examine their consciences and then vote the way they feel is consistent with their beliefs. I don’t want to be told that in church.”