REFORMERS within the Roman Catholic Church have been calling for the ordination of women as priests. The Vatican, however, refuses to consider the possibility and uses its power to silence those who speak out. Catholic clergy in Europe, Australia and the United States who have voiced public support for female ordination have been either dismissed or threatened with removal from administrative posts within the church. 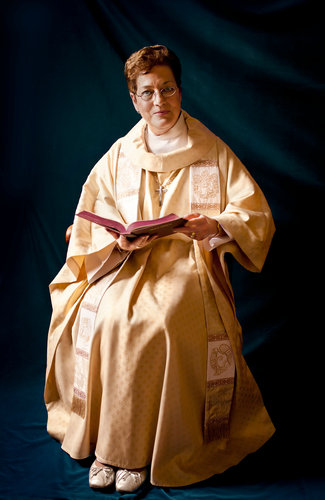 For those who disobey the prohibition, the consequences are swift and severe. In 2008, the Vatican decreed that any woman who sought ordination, or a bishop who conferred holy orders on her, would be immediately “punished with excommunication.” It went a step further in 2010, categorizing any such attempt as delicta graviora — a grave crime against the church — the same category as priests who sexually abuse children.

In the last 10 years the Vatican has had to contend with a particularly indomitable group of women who seem to be unaffected by excommunication or other punishment offered by the church. The movement started when seven women were ordained by three Roman Catholic bishops aboard a ship on the Danube River in 2002. The women claimed their ordinations were valid because they conformed to the doctrine of “apostolic succession.” The group that grew out of that occasion calls itself Roman Catholic Womenpriests. There are now more than 100 ordained women priests and 11 bishops.

I grew up as a Catholic, although I don’t practice now. The first time I saw a female Roman Catholic priest on the church altar, dressed in traditional robes, performing the Eucharist and all of the rituals that I grew up with, I was amazed at how deeply it affected me emotionally. It had simply never occurred to me that a woman could preside over the church.

The Roman Catholic Church’s argument against the ordination of women is simple and relies on the logic of tradition: “that’s what we have always done.” Pope John Paul II issued an apostolic letter in 1994 saying that the church had no authority to ordain women because, among other reasons, Christ chose only men to be his apostles. Pope Benedict XVI agrees with his predecessor and insists that the church need offer no further justification for its opposition to women as priests, calling instead for a “radicalism of obedience.”

But contemporary theologians, historians and priests have been challenging the historical basis of the Vatican’s assertion. Recent research suggests that Mary Magdalene, among others, may have been an apostle and that women played leadership roles that profoundly shaped the early church.

Karen L. King’s recent discovery of a scrap of papyrus making reference to Jesus’ wife, and to a female disciple, adds weight to the charge that the Vatican’s opposition to the ordination of women is theologically and historically flawed. The Vatican, however, argues that the document was forged.

I photographed priests and bishops of the Roman Catholic Womenpriests movement to alter my own deep-seated perception of priests as male. I tried to capture their devotion and conviction and pay tribute to their efforts to reform the church.