Special Masses for gay Catholics at a London church are to be scrapped, the Archbishop of Westminster has said.

Archbishop Vincent Nichols said Masses at Our Lady of the Assumption Church in Warwick Street, Soho, would end. 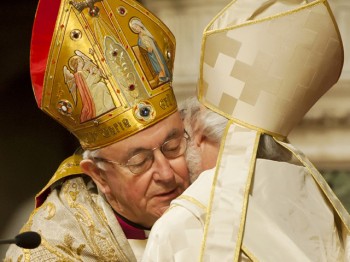 He said the Masses were not in line with the church’s central teaching on sexuality.

Gay rights charity Stonewall said: “It is a real shame he’s taken away an opportunity for gay Catholics to celebrate Mass in a safe environment.”

Archbishop Nichols, the leader of the Roman Catholic Church in England and Wales, has been one of the loudest voices opposing government plans to allow same-sex marriages.

He said, in a statement, that “people with same-sex attraction” would continue to receive pastoral care.

‘Moral teaching’
The church will be dedicated during Lent to the Personal Ordinariate of Our Lady of Walsingham, a group set up by Pope Benedict XVI in 2011 for Anglicans who defect to Roman Catholicism.

Archbishop Nichols said: “The moral teaching of the Church is that the proper use of our sexual faculty is within a marriage, between a man and a woman, open to the procreation and nurturing of new human life.”

But Stonewall director of public affairs Ruth Hunt, who is Catholic, said: “Given what’s happened over Christmas, where there were vitriolic and mean messages from the pulpit about same-sex marriage, there has never been a more important time to provide a safe space for gay Catholics to pray.”

‘Express faith’
Ms Hunt responded: “The archbishop’s views on gay issues are well rehearsed and have nothing to do with the spirituality of some lesbian and gay people and their desire to express their faith.”

The Masses for gay Catholics have been held at the church for the past five years.

Our Lady of the Assumption Church in Warwick Street and The Diocese of Westminster have been approached by the BBC, but declined to comment.

Archbishop Nichols has previously attacked the government’s gay marriage Bill, labelling it “undemocratic” and a “shambles”.

The coalition government is committed to legislating on gay marriage by the 2015 general election and a Bill is expected to be tabled in January.

Prime Minister David Cameron has promised his MPs a free vote on the issue.