Polish director Malgoska Szumowska tackles the controversial topic of homosexuality in the Roman Catholic priesthood in her film “In the Name of” that had its world premiere on Friday but she said her aim was not to deliver a political message.

“In the Name of”, the first of 19 competition entries to screen at this year’s Berlin film festival, focuses on a priest’s struggle with his sexuality while working with troubled youths in a deprived corner of rural Poland where drug and alcohol abuse are commonplace. 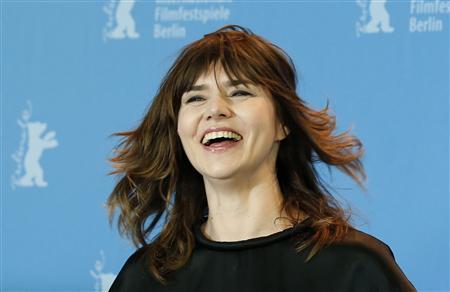 The film takes a swipe at the Catholic Church, which still wields huge influence in Poland, and Szumowska said she expects Polish conservatives to react negatively, but she said her main concern was to depict the loneliness of a priest’s life.

“They (the Catholic Church) don’t want to change anything. The church does not fit in with modern society,” Szumowska told a news conference after the screening.

“Out of this conflict only bad things happen. I think they are extremely closed and intolerant… But I am not a politician or an intellectual,” she added.

The priest Adam, played by Andrzej Chyra, has a good rapport with the dope-smoking, hard-talking young men in his care, playing soccer and swimming in a lake with them. He wards off his growing sexual frustration with long runs in the forest.

After rejecting the advances of a young woman parishioner Ewa, Adam strikes up a friendship with the taciturn son of a simple local family who returns his affection.

In one of the more memorable scenes in a film characterized by furtive glances, whispered confessions and a tense mood that swings swiftly from joy to despair, Adam dances with a portrait of the Pope to loud music after downing a bottle of vodka.

“It is hard to imagine a more lonely person than a priest… I spoke to many priests and they told me that it is very hard,” said Szumowska.

“I wanted to understand my character (Adam), not judge him,” she told the news conference where she was joined by Chyra and Mateusz Kosciukiewicz who played his young lover.

“We have very strong discussions now in Poland, about the church, about homosexuality. We now have priests leaving the church,” she said.

The film’s premiere comes just weeks after the Polish parliament rejected draft laws that would have given limited legal rights to homosexual couples in a move that disappointed many younger, urban Poles with liberal views about sex.

And yet Poland – whose parliament includes its first transsexual lawmaker – is changing.

“It was not hard getting money to make the film. The Polish Film Institute is not afraid of controversial issues. Poland is a democracy and you can say whatever you want,” she said.

Szumowska, 39, is a graduate of the famous Lodz film school where some of Poland’s greatest directors including Andrzej Wajda and Roman Polanski also studied.

Asked why she thought there were so many films from former communist central and eastern Europe screening at this year’s Berlin festival, Szumowska said it may be because of the rapid pace of change in a region that has had to embrace capitalism and democracy in a short period of time.

“Everything is still fresh… There are so many things going on, always we have strong discussions. We are always talking about who we are,” she said.

Though somber in tone – one of the boys hangs himself after a homosexual affair with another boy – “In the Name of” ends on a disconcertingly ambiguous note, showing the object of Adam’s love joining a seminary to train as a priest.

“The ending is ironic and kind of confusing but realistic,” said Szumowska.