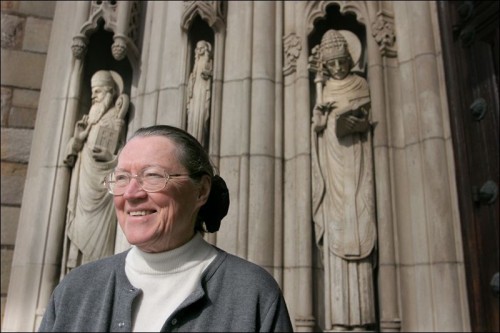 Her ordination at 2 p.m. at First Unitarian Church of Toledo, 3205 Glendale Ave., will not be recognized by the Diocese of Toledo, however.

After she was ordained a deacon on Sept. 13, the diocese stated her participation “in an invalid and illicit attempted ordination” meant she was automatically excommunicated from the Roman Catholic Church.

The diocese has released a similar statement in advance of today’s ceremony, reminding that Deacon Bingle is excommunicated and that Ann Klonowski, a woman from the Diocese of Cleveland who will be ordained a deacon at the same ceremony today, will lose her standing in the church.

However, the Reverend Bingle, as she can be called with today’s ordination by Bishop Joan Houck of Roman Catholic Womenpriests, not only will participate in the ceremony; on Sunday, she will start holding weekly services as a priest for the Holy Spirit Catholic Community, a church she’s starting that will meet at Unity of Toledo, 3535 Executive Pkwy., at 5:30 p.m. Sundays. Ash Wednesday services are set for 5:30 p.m. Wednesday.

“The whole excommunication thing, I don’t accept,” she said. “Neither do the members of the church. People are literally fighting over who gets to give me communion every day. It’s beautiful.”

She attends despite controversy.

“I go to Mass daily, or at least try to,” she said. “That’s my most important prayer, is the Mass, the assembly of the people of God acknowledging that they are the body of Christ, and that we are called to make a difference in the world. I go various places. I normally go to Corpus Christi [in Toledo]. I’m still a member, and they can’t take away my baptism. I just go and I sit there at Mass, and and I will receive communion. Somebody will break a host and give me one surreptitiously, or I’ll receive it before or after. I drive a good distance sometimes to go to Mass where nobody knows me.”

Knowing Roman Catholics do not welcome women into the priesthood, why did she pursue this dissident path rather than finding another denomination?

“Roman Catholic Womenpriests calls it prophetic obedience,” the she said. “I am obedient to God and that requires me to speak out against injustice, and when God says, ‘Do this,’ I do. I feel I’m called [to be a Roman Catholic priest]. Our purpose is renewed priesthood in a renewed church. We can only renew from where we are.”

She started on a more traditional route to Catholic ministry with the Toledo diocese’s five-year deacon-training program. “I started in, and I did two years [of study.] This would have been the early ’90s. At the end of the second year, they handed out this paper. One of the questions was ‘Do you want to be ordained a deacon?’ I said yes — what did I know? Well, I was told that I didn’t have ‘the equipment’ and I was not allowed to continue in the program. I guess they expected that [as a woman], I would have known to say no, but then I would have lied.”

She continued to work for the church, though. She was the pastoral associate at Most Blessed Sacrament Parish until she retired in 2011. “As an employee of the Catholic parish,” she said, “I did everything except sacraments at one time or another.” 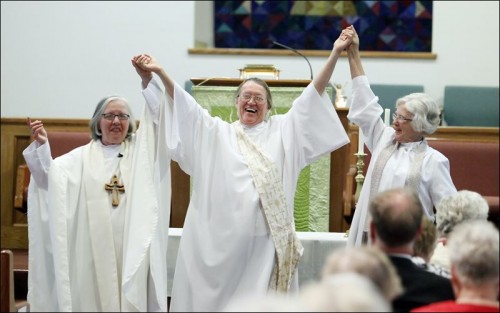 Priests traditionally administer sacraments, such as blessing the host for communion, performing weddings, and leading other sacred acts.

The Reverend Bingle says she doesn’t believe she will be mystically transfigured with the bestowal of priesthood or as the actions of her hands invoke God’s blessing. “It’s God’s actions, the spirit of God in the community transforming us and the elements of the Eucharist into Christ’s holiness, but we’re Christ, [all people] are,” she said.

She is jumping into parish ministry by starting the Holy Spirit Catholic Community. “I never thought of myself as starting a church,” she said, “and in a lot of senses, the church is already there. I’m just going to hopefully allow those folks who have been dissatisfied, alienated by the [Roman Catholic] hierarchy, they’ll see a place to come. There’s a lot of people who might be able to walk into a community that is renewed, a community that understands that they were abused by priests; that understands that their kid couldn’t go to a Catholic school because he had a handicap — that we got fixed; or parents who won’t go because their kids are gay, ‘their kids can’t go, so I won’t go.’ That’s what keeps me going. Those folks, they need a church, they need a place to go.”

There is the possibility she could preside in a Roman Catholic church, she said. “I’ve had a Catholic church in the diocese contact me about saying Mass for them when they can’t find a pastor,” she said, laughing. “I wish I could say who they are, but I can’t.”