In the twelve days since Benedict XVI announced his retirement, I’ve been wondering whether the Church of Rome might not have been better served—at least from the point of view of progressive Catholics—by the Pope keeping his job and drawing an eventual last breath, in what he would call God’s time, on Peter’s throne. It would have released those Catholics from the strictures of empathy, admiration, and grueling patience his voluntary leaving seems to have placed upon them. (St. Peter, by the way, was married.) The response has been uncharacteristically kind. And how could it not be, at the shock of such eloquent and simple humility coming from the man who, for the past thirty-two years, enforced and eventually led the doctrinal retreat into the Middle Ages begun by his predecessor. There have been endless comparisons between the style of Benedict’s departure and that of John Paul II, in 2005; they are almost comically stereotypic: Pope John Paul II’s ardent, emotional, and pointedly public ecce-homo calvary through disease, senility, and incapacity to death; and Benedict’s rational, considered decision, clearing the way for a like-minded successor who would presumably restore obedience and fealty to a Church whose authority, like his own, was waning. “For the good of the Church,” is how Benedict described his resignation. It may be that, however weakened, Benedict was crafty. 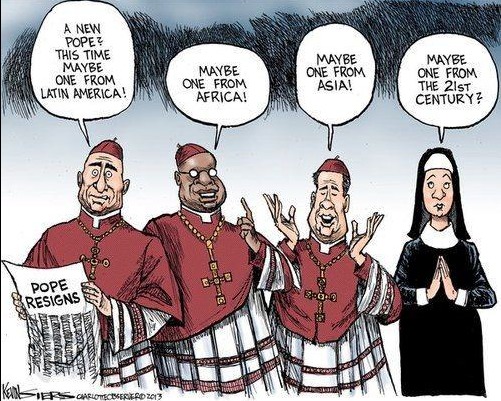 There have been many theories, though few, to my knowledge, say that Joseph Aloisius Ratzinger was pushed into retirement, let alone that those honest, eloquent words about no longer possessing the quality of mind and body that the papacy requires had been scripted for him. And with good reason: knowing Benedict, he probably pushed himself. Today, the average age of the Church’s cardinals, who will convene next week to begin considering candidates for the next pope, is seventy-two, and those who are under eighty—the only ones eligible to actually cast ballots in a papal conclave—were all appointed by John Paul II or, more often than not, by Benedict XVI. So it’s safe to say that the College of Cardinals has been stacked to ensure that their linea gotica continues moving backward. And never mind that the Church has been losing both priests and nuns because of a doctrine of celibacy that began not in the Gospels but in the fourth century (and was largely ignored until much later); because of a doctrine of infallibility that in fact only became canonic in 1870; and because of an institutionalized misogyny that has not only kept women from the priesthood but sends them to Hell if they drop by Planned Parenthood for a morning-after pill, or even if, like those valiant American “nuns on the bus,” they drive off without permission to minister to the poor. The list goes on. A new face, with a new infallibility chakra under his papal hat, may be the Church’s last best hope for what is now called “putting the past behind us”—“the past,” in this case, including decades of rampant, officially closeted pedophilia, involving thousands of priests preying on tens of thousands of children—and continuing its long march backward.

I once met a writer who had been working for years on a book about the Vatican. His idea was that the Catholic Church was the oldest successful corporation in the world, and he predicted that the legacy of John XXIII, whose famous metaphor for the Second Vatican Council was throwing open the windows of the Church of Rome and letting in fresh air, would prove to be, corporately speaking, inconvenient. He was right. Dissident underlings are never convenient, in theology as in business.

When John Paul II was elected in 1978, he was certainly a breath of air, at least in style. He was warm. He wrote poetry. He was “the people’s pope”—a disarming populist and Mary worshipper, which endeared him, if not to Catholic intellectuals, at least to the Catholic masses trying to beat back poverty around the world. He was also a fervent anti-Communist. His support of Solidarity played a huge role in the dismantling of Soviet power that began in deeply Catholic Poland, and people loved him for that. It tended to obscure the fact that, like the Polish Church in which he’d been raised, he was profoundly conservative when it came to dogma. He instructed poor Catholic women (who filled the stadiums of the Third World to hear him) to reproduce, and to keep reproducing, and never mind if the women were struggling against all odds to feed the children they already had. He refused to consider the possibility of married priests or women priests, let alone openly gay priests. What’s more, he arrived at the Holy See with what could be called a professional deformation—understandable in a priest who had spent half his life under Stalinist rule, but delusional all the same. He saw Communists everywhere, and nowhere more than in the communitarian Christian movement called liberation theology, which was the real fresh air of Roman Catholicism and, at the time, doing more to revive Catholic practice in South and Central America than any pope could, or would, short of joining that movement himself.

Enter Joseph Ratzinger, who, three years into John Paul’s papacy, in 1981, took on the role of Bad Cop to Karol Wojtyla’s Good Cop (an arrangement not unheard of in corporations). The official title was Prefect of the Congregation for the Doctrine of the Faith, formerly known as the Inquisition. It was, you could say, the job Ratzinger was born for. He made an enthusiastic stalker of “heretical” practices and opinions, so much so that the people he held in his doctrinal sniper’s sight took to calling him the Grand Inquisitor. His targets ranged from an old Tübingen University friend and mentor, Hans Küng (whom he reportedly had a hand in barring from teaching Catholic theology just before his appointment as Prefect, in 1979), to priests and teachers in progressive orders like the Jesuits. The list is long. Under his watch, America’s liberal Conference of Catholic Bishops quickly became a conservative force, responsible for, among other things, denying communion to Catholic politicians who accept that contraception and abortion rights could be granted under the Constitution of our (still) secular state. He marginalized a group of Brazilian cardinals and bishops who had risked their lives to bear witness to atrocities in the political prisons of their country’s right-wing military junta—most notably the cardinal Aloísio Lorscheider, an appointment of Paul VI (and a strong contender to succeed him) and a lifelong defender of the liberation-theology movement and its priests.

The theologian Leonardo Boff was not only one of those priests but one of the founders of the liberation movement. I knew him in Brazil, in the mid-eighties, where I was writing a piece on a liberation-theology parish priest. Boff had been sentenced to silence for a year—courtesy of Cardinal Ratzinger—for his deviant views. Happily, Boff (who would leave the priesthood six or seven years later, when Ratzinger tried to silence him again) was ignoring the Vatican’s punishment, at least at home. He was, and remains, a remarkable Christian: “as Marxist as Luke” is how he described himself and his dedication to the poor. Twenty years later, Ratzinger was Pope, and one of the words he brought with him from the C.D.F. was “deviant.” Remember his exhortation on “deviant sects,” his term for other faiths, including Christian ones? Remember, for that matter, his Regensburg speech about the inherent illogic (if not evil) of Islam? His friend Rowan Williams, the former Anglican Archbishop of Canterbury, once told me how much he always looked forward to talking to Benedict on his unofficial visits to Rome; they shared an interest in Augustine, and Williams was, as he put it, immensely impressed by the Pope’s quality of mind. That did not prevent Benedict from poaching on Williams’s turf when he opened the Church of Rome to Anglican priests opposed to the ordination of women bishops. It remains unclear whether Benedict counts the Church of England as another “deviant sect” or simply as a lapsed Catholic institution that refused to acknowledge him.

What is “deviant”? Most of us would consider the Holocaust-denying followers of the late Marcel LeFebvre deviant. LeFebvre was a French cardinal so frighteningly racist that he and the four “bishops” he had illegally appointed were excommunicated by John Paul II. But Benedict reversed the excommunication of those bishops—on condition that they kept their views on the Holocaust to themselves. (Their silence was equivocal, given that you could read those views in the books and pamphlets they continued to sell, along with cakes and honey, in their monastery-churches.) It seems that in any reasonable church they would be considered more “deviant,” theologically, than a Leonardo Boff or a Gustavo Gutiérrez, the Peruvian liberation theologian who lived with the poor, practicing theology “from below.” And what about those child-molesting priests who, once caught, were not only protected by their bishops and, for years, ignored by the Vatican but were, instead, discreetly transferred to other parishes, where they could begin molesting again. I wish Ratzinger well in his new life of prayer. But I hope that, in the tranquility of his reflections, he reconsiders the meaning of the word “deviant.”