On a frosty December night last year, about two dozen guests slipped into the Alta Club, a century-old private retreat a block away from the temple of the Church of Jesus Christ of Latter-day Saints that dominates Salt Lake City.

Two men, who didn’t know each other, were the reason for the dinner: church lobbyist Bill Evans and gay rights leader Rick Jacobs. Evans was a point man for the church’s successful effort to pass California’s gay marriage ban, known as Prop 8, in 2008. Jacobs, leader of Courage Campaign, produced a 2008 commercial against the ban showing Mormon missionaries ransacking the home of a lesbian couple. 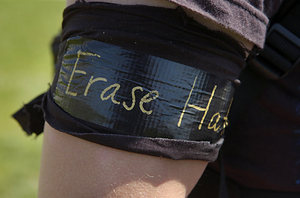 Politics was not on the agenda – just getting to know each other. “The two hit it off,” said host Greg Prince, a medical researcher and church member who had come to know both men. He noted that less than a month before the dinner, the church had launched a website with a major change in its view of gays: the site said homosexuality was not a choice.

“There has been a shift of some tectonic plate somewhere,” Prince said.

Shifting attitudes among some conservatives and many businesses is altering the landscape around gay marriage, long considered a uniquely liberal and political issue, at one of its most crucial junctures – its review by the U.S. Supreme Court.

On Tuesday and Wednesday, the court’s nine justices will hear arguments on the constitutionality of Prop 8 and the Defense of Marriage Act, which excludes gay couples from federal benefits.

Some jurists look to societal changes when interpreting the law, and scholars speculate that Justice Anthony Kennedy, the possible swing vote in the divided court, will be pondering increased public support for gay marriage.

While the Mormon Church has backed “traditional marriage” in Supreme Court briefs, it has been silent in recent ballot battles and has not promoted fundraising as it has in the past.

Republicans like Senator Rob Portman of Ohio are supporting gay marriage and publicly conflicting with party leaders, such as House of Representatives Speaker John Boehner. Portman this month said he had switched position on the issue after his son told him he was gay.

Corporations, including Goldman Sachs, whose chief executive, Lloyd Blankfein, has campaigned in support of gay marriage, have joined the battle, arguing in briefs to the court that federal policy of not allowing gay marriage is bad for business.

The issue is far from settled, however. Gay marriage opponents have been written off as dinosaurs before, including in California, and most states ban same-sex weddings. But the momentum has been moving towards the proponents of gay marriage.

Money has played a huge part in the pivot, both in terms of the financing of campaigns in favor of gay marriage and the funding of opposition groups.

“You have billionaires telling Republicans ‘Vote our way and you’ll receive more money than you’ve ever seen,'” said Brian Brown, president of the National Organization for Marriage, the leader of the movement to stop gay marriage. “That was new.”

Pro-gay marriage groups have routed their opponents financially, outraising them three-to-one in November 2012 ballot races that legalized same-sex marriage in three more states, bringing the total to nine states and the District of Columbia.

The single biggest fundraising change between 2008 and 2012 was the disappearance from the political arena of the mightiest foe of gay marriage – the Mormon Church.

While the church has petitioned the Supreme Court in favor of Prop 8, it has focused its public messages about gays on personal issues of respect and love rather than politics.

In the four November 2012 votes – Maine, Maryland, Washington and Minnesota – the top ballot committees raised about $30 million for gay marriage and $10 million against it. The $20 million difference between the two campaigns last year is close to several estimates of what the Mormon Church and its supporters gave to California’s Prop 8 in 2008.

Frank Schubert, who ran the 2008 and 2012 anti-gay-marriage campaigns, downplayed the Church hierarchy’s silence last year. “Not having a direct statement encouraging people to get involved in the campaign naturally would result in fewer people getting involved in the campaigns, but there were fewer Mormons in these states to begin with, and there was never any expectation that they would be involved.”

California Mormon Brooke Crosland, 27, gave $1,000 in 2008 for Prop 8 and made campaign phone calls, but she stayed out of politics in 2012. She described a personal search for understanding, which she saw reflected in the church. “I feel like the ideal for a child is a father and a mother, but I also feel under the law we should have equal rights,” she said.

Screenwriter Dustin Lance Black, whose portrait of gay rights pioneer Harvey Milk won an Academy Award, was approached for informal talks by Mormon officials after he narrated a documentary critical of the church called “8: The Mormon Proposition.” Church officials were surprised to learn that he, a young, gay man, deeply wanted a family. “That was this big ‘ah ha’ moment,” he said.

But Black said the initial invitation came only after the church was pilloried in public. “They didn’t contact me after making ‘Milk’. They contacted me after making ‘8: The Mormon Proposition’,” said Black, who was raised a Mormon. He since has introduced HRC leader Griffin to church officials, at the December dinner and a concert following, while continuing talks.

Church spokesman Michael Purdy said its hospitality did not signal a change in position. “Being committed to marriage between a man and a woman does not mean that we do not love and care for all of God’s children. Having conversations with gay rights leaders, speaking about compassion and respect for all, and inviting people to attend a concert do not equal pulling back from supporting traditional marriage due to negative publicity during Prop 8,” he wrote by email.

Dozens of Republican leaders, including former California candidate for governor Meg Whitman and former presidential candidate Jon Huntsman, have signed a brief to the Supreme Court in favor of gay marriage.

Some 278 businesses, including Goldman Sachs and hotelier Marriott International, whose chairman and major stockholder is Mormon, have signed a similar brief opposing the Defense of Marriage Act. (Thomson Reuters, the parent of Reuters News, is part of that group.)

The person credited by all sides with cementing the victory in California for the gay marriage ban was a little schoolgirl who told her mother she had just been taught, “I can marry a princess!” The girl was in a commercial for Prop 8, and for years Evan Wolfson, president of Freedom to Marry, has been asked whether he could beat the “Princess” ad.

Wolfson, a fundraising and strategy leader for most recent ballot campaigns in favor of gay marriage, said the answer was chiefly to change his own side’s message, rather than chase the opposition. The pro-gay-marriage campaign, which in 2008 had largely focused on appealing to voters to give gays rights because it said they deserved them, took a more personal tone, he said, of affirming the idea of equal rights and respecting loving couples.

That strategy had some unexpected converts.

David Blankenhorn, founder of the family-focused Institute for American Values think tank, was the prime witness in 2010 in the opening round of the federal trial of Prop. 8. Blankenhorn struck up unlikely friendships with gays while debating the issue in public, and he was sitting at his desk one day last year, when one called and told him to go to a website with a strident, anti-gay article.

“He said, ‘Are you sure that this is the side you are on?'” Blankenhorn recalled. He put down the phone, and in that moment realized he had already changed his mind.

“I have a kind of intellectual reason for shifting from one foot to the other foot,” he said “But I really, honestly think that it was through just personal interactions… if you want to stick with your position, don’t get to know people who disagree with you.”

Gay marriage foe Brown says he is not worried by polls that show gay marriage support snowballing. It’s all about how you ask the question, he said, and a majority of voters do not want to redefine marriage. His side has always been behind in the money battle, he added, but has had some banner successes.

Politicians can see the danger of switching sides, he said. Of the four New York State Senate Republicans who voted for same-sex marriage, only one returned to office, despite financial backing from sources as diverse as the Service Employees International Union (SEIU) union, Wall Street Republicans, and libertarian David Koch.

Back in California, Rick Jacobs, the Courage Campaign chief, thinks Prop 8 was the best thing that ever happened to his movement. People sat up and started paying attention when liberal California overturned its own state Supreme Court and took away the right to marry, he said, and the court fight has kept the issue alive.

“It not only galvanized a lot of people who didn’t really care about it before that – gay people – but it also galvanized straight people,” he said. “People said, ‘wait a minute, we don’t like voting on people’s rights.'”

The night in Salt Lake City left little doubt things had changed since 2008. After the dinner, the gay rights leaders all headed over to the Mormon Tabernacle Choir’s Christmas spectacular. It was the hottest ticket in town and, as guests of the church, they had VIP seats.