Pope Francis emphasised the “fundamental” importance of women in the Roman Catholic Church on Wednesday, saying they were the first witnesses of Christ and have a special role in spreading the faith.

By Naomi O’Leary
The pontiff’s decision a week ago to include women in a traditional foot-washing ritual drew ire from traditionalists, who see the custom as a re-enactment of Jesus washing the feet of his apostles and said it should therefore be limited to men. 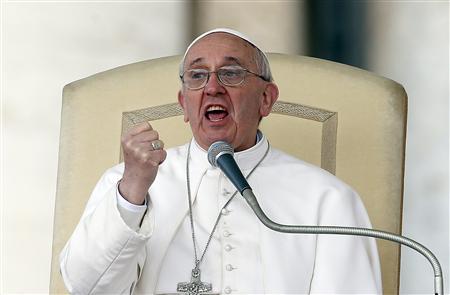 Francis, elected last month as the first non-European pope in 1,300 years, said women had always had a special mission in the Church as “first witnesses” of Christ’s resurrection, and because they pass belief onto their children and grandchildren.

“In the Church, and in the journey of faith, women have had and still have a special role in opening doors to the Lord,” Francis told thousands of pilgrims at his weekly audience in S. Peter’s Square.

He said that in the Bible, women were not recorded as witnesses to Christ’s resurrection because of the Jewish Law of the time that did not consider women or children to be reliable witnesses.

“In the Gospels, however, women have a primary, fundamental role … The evangelists simply narrate what happened: the women were the first witnesses. This tells us that God does not choose according to human criteria.”

It was the second time Francis had spoken of women’s role as witnesses to the resurrection of Christ, a subject of bedrock importance to the Catholic faith.

His Easter Vigil address on Saturday reached out to women and urged believers not to fear change.

“This is very encouraging,” said Marinella Perroni, a theologian and leading member of the Association of Italian Women Theologians, which promotes female experts on religion and their visibility in the Church.

“Pope Francis is taking up, with a stronger emphasis, the teaching of previous popes about the role of women in the foundation of faith and the resurrection of Jesus,” Perroni told Reuters.

“The fact that the Pope acknowledges that the progressive removal of female figures from the tradition of the resurrection…is due to human judgments, distant from those of God…introduces a decidedly new element compared to the previous papacy.”

Supporters of liberal reform of the Church have called on the institution to give a greater voice to women and recognise their importance to the largest religious denomination in the world.

Some groups call for women to be ordained as priests, which the Vatican says is wrong as Jesus Christ willingly chose only men as his apostles. Advocates of a female priesthood reject this position, saying Jesus was merely conforming to the customs of his times.

The election of Francis, an Argentinean, last month came in the wake of another break with tradition when predecessor Pope Benedict became one of the few pontiffs in history to resign.

His 76-year old successor has set a new tone for the papacy, earning a reputation for simplicity by shunning some ornate items of traditional dress, using informal language in his addresses, and so far choosing to live in a simple residence rather than the regal papal apartments.

Sources inside the Vatican have said Francis could reform the Vatican’s bureaucracy and restructure or even close down the Vatican’s bank following a series of scandals at the heart of the Holy See that damaged the Church’s reputation.