The Roman Catholic Church in England and Wales has turned down a request by members for the results of a sexual ethics survey to be made public.

The unprecedented worldwide poll was commissioned by Pope Francis.

Reformers said refusing to publish the results would suggest the Church was not sincere about sharing responsibility with lay people.

A Church spokesman said a senior Vatican official had expressly asked for summaries to remain confidential. 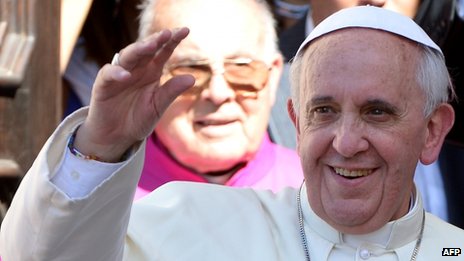 The survey was sent to Catholic bishops around the world last November, with instructions to consult as widely as possible.

It tackled sensitive subjects such as contraception, cohabitation and homosexuality.

Many Catholics saw the inclusion of such questions as a sign that Church teaching in such difficult areas might be reformed, and that lay people might be allowed a greater say in how the Church was governed, he added.

Father Marcus Stock, general secretary of the Catholic Bishops’ Conference, told BBC Radio 4’s Today programme that the questionnaire was a “much broader consultation than just a survey”.

He said orders had come from the Pope, via Cardinal Lorenzo Baldisseri, that the information should not be made public until after October.

The consultation is part of the preparation for the extraordinary meeting of the Synod of Bishops, which will focus on the subject of family.

Fr Stock acknowledged there were “great expectations” of the process, but insisted bishops’ decisions should not be predetermined.

“The reflection of the bishops during the Synod must not be predetermined by individual groups or by the concerns of northern Europe alone,” he said.

A Call to Action, a group working for reform in the Church, said people who had completed this “challenging” questionnaire would be saddened and perplexed if the results were withheld.

Jean Riordan, chair of the group’s national leaders team, told the Today programme that “dialogue and transparency” would help the process – and not put pressure on bishops or predetermine their decisions.

Other Churches which have published summaries of the responses, including those in Germany and Austria, have described a wide gap between Church teaching and the behaviour of ordinary Catholics.

However, Fr Stock ruled out similar action in England and Wales.

The Pope has signalled greater openness, and has said the Catholic Church is too tied up in “small-minded rules”.