By OBY BROWN and PHILLIP RAMATI

Mount de Sales Academy students and parents met with the school president Thursday, seeking the reinstatement of the school’s gay band director, who was fired Wednesday.

Students are planning a protest outside the school Friday morning. 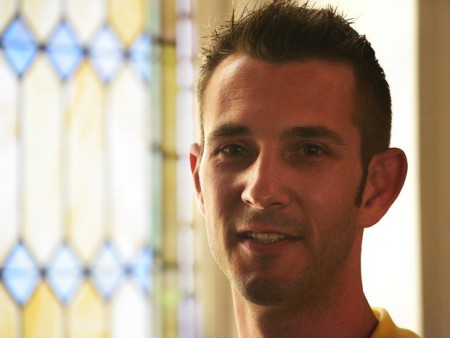 Band director Flint Dollar, 32, had posted on his Facebook page that he plans to marry his male partner of six years this summer in Minnesota.

He said Thursday that officials at the Catholic high school in Macon told him he was being fired because of that planned marriage.

Now, students and parents are marshaling forces to try to get him reinstated after more than four years on the job.

They’ve started a Save Flint Dollar page on Facebook, which already has more than 800 likes, a Twitter hashtag for #savedollar, and a Change.org petition. Thursday afternoon, about three dozen parents and students met at Mount de Sales to talk with David Held, the school’s president, asking that Dollar be rehired.

Dollar, a graduate from Howard Payne University with a degree in church organ music and a master’s degree from Mercer University, said he has never hidden his sexual orientation from school officials.

“I have been upfront with the school since my first interview,” he said. “This was not a secret.”

Dollar said he first approached school officials in October about his intention to marry his partner, and no one gave him any indications that it would be an issue.

Dollar said teachers at the school work on one-year contracts, and he was offered a new contract May 1, which he signed and was initially accepted by the school.

But that changed Wednesday when Dollar met with Held.

“I was told that because I was planning to marry my partner that I would not be returning to Mount de Sales next year,” Dollar said.

Mount de Sales’ employment policy says in part: “Mount de Sales Academy is committed to the principles of equal employment opportunities to all qualified individuals without regard to race, color, gender, ancestry, national origin, age, religion, creed, disability, veteran’s status, sexual orientation, gender identity or gender expression, or any other characteristic or status that is protected by federal, state, or local law.”

Dollar said he has called a few attorneys and gay organizations to seek advice. He’s been told that the school’s employment policy seemingly should have protected him. Dollar said he’ll likely retain an attorney after the holiday weekend.

A letter from Held sent to Mount de Sales parents did not mention Dollar by name. The letter points out that Mount de Sales is an independent Catholic school sponsored by the Sisters of Mercy.

“As a Mercy School, we operate from a set of core values that is in keeping with the charism of The Sisters of Mercy,” the letter said. “In addition to being a Mercy School, we are a Catholic School located in the Diocese of Savannah, which places us under the direction of The Bishop of Savannah in all questions regarding Catholic identity and the teachings of the Catholic Church on faith and morals.”

Held also said in the letter that he tries his best “to make decisions based on our mission and what is best for our students.”

“Personnel decisions are never easy, and we consider many factors when making such decisions. Teaching ability, knowledge of the subject matter, the ability to communicate with constituents, and the willingness to support the teachings of the Catholic Church are just some of factors considered when making these decisions. Please know that these decisions are never made arbitrarily and are guided always by our mission as a Catholic School.”

Fred Sainz, vice president of communications for the Human Rights Campaign, said Dollar’s case is at least the second one he knows of in which a Catholic school under the direction of the Sisters of Mercy fired a gay teacher planning to marry. The Mount St. Mary Catholic School in Little Rock, Arkansas, fired teacher Tippi McCullough last year after she announced plans to marry her partner.

Dollar said there is nothing in his personnel file “that would preclude me from receiving a job” at the school. Dollar said he was inundated with phone calls and emails Wednesday and Thursday and has been “overwhelmed” at the level of support he’s drawn from students and parents.

Many who attended Thursday’s meeting with Held were emotional as they left.

Amanda Herrold, a rising freshman at Mount de Sales, said Dollar “saved my life in more ways than one.”

“His kids loved him and he loved his kids,” she said. “I was suffering from depression, and he was the only one I could go to. He’s the only person I felt I could talk to.”

Her mother, Laura Herrold, said Dollar has always acted professionally and said the eighth-grade graduation ceremony he organized earlier this week was “phenomenal.”

“He put his heart and soul into it,” Laura Herrold said.

Sonya Foster, whose son is a rising senior at the school and a member of the school marching band under Dollar, said that while Dollar being gay wasn’t a secret, he never flaunted it, either. She said among the parents and students she knows, his sexuality was a non-issue.

“I’m absolutely outraged,” she said. “I’m not willing to stand by and say, ‘That’s OK.’ It speaks to who this man is that all these people are here. He’s been a role model.”

Asked if he would be attending any of the gatherings in Macon, Dollar said no.

“This is their statement. I’m not taking that away from them,” he said of the students.

Asked if he would return to Mount de Sales now if he were offered back his job, Dollar said, “At this point, I don’t know.”