For a man who has made it a point to be humble in his faith and to take politicians in the United States to task, meeting Davis was a profound error 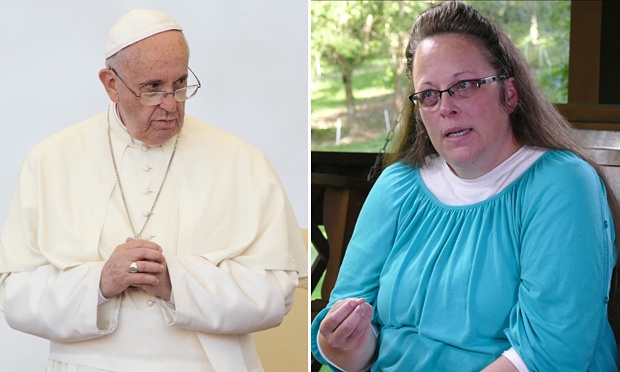 Pope Francis will never be pro-choice. He will never preside over the ordination of women nor perform a same-sex wedding. He is a Catholic, after all.

But from the moment he alighted in DC to wheels up from Philadelphia for his first US visit, the pope’s statements sent shockwaves through both the Catholic communion and the US political community. While speaking to Congress, he demanded attention to climate change. He chastised a war-happy nation against selling arms for “blood money” and never once did he use the word “abortion” in a public forum. For the Roman Catholic Church, which evolves at a glacial pace, each of these small utterances or omissions were nothing short of miraculous.

Then came word that the pontiff met with Kim Davis.

He met with many people during his visit: the Little Sisters of The Poor, the order of nuns embroiled in a legal battle over the contraception provision of Obamacare; the conservative leader of the House of Representatives, John Boehner, who promptly announced his retirement the next day; Mark Wahlberg – arguably a questionable move – and got the official blessing of Her Majesty, Madonna.

Davis is the Rowan County Clerk who famously emerged from her Kentucky jail cell to Eye of the Tiger and into the embrace of Mike Huckabee for refusing to issue marriage licenses to same sex-couples. Most recently, Davis announced that she was leaving the liberal Democratic Party to join the more accommodating confines of the right-wing Republican one.

The meeting can be heckled by observers for many reasons, including that she’s a member of a church that generally believes Catholics to be heretical idolaters and her belief that loving gay couples shouldn’t get married. But her meeting with the pope casts no reflection on her. We saw what she stood for weeks ago.

Instead the meeting casts a long and confusing shadow over the pope, the first pontiff from the Global South, who was supposed to be a man of the people. The stories of his humility have rapt lapsed and so-called “cafeteria” Catholics around the world. Raised Roman Catholic but not a follower in adulthood, I too was taken by this pope. Riding the bus in Argentina. Considering himself a sinner. His off-the-cuff remark – who am I to judge? – when asked about LGBT people by a reporter. This pope, it seemed, was different.

For a man who has made it a point to be humble in his faith and to take politicians in the United States to task, meeting Davis was a profound error.

Davis is a politically charged figure. Had she not been elevated to near sainthood by Mike Huckabee and others, perhaps she would have faded into the ether. For better or worse, Davis is now a symbol of right-wing Christian morality and so-called traditional and wholesome family values. Her notoriety epitomizes what non-inclusivity looks like. What are we to think about the humble, who-am-I-to-judge pope stamping with approval the values of Kim Davis?

Maybe one of his many handlers didn’t do a simple Google search on exactly how divisive a figure Davis has become? It doesn’t matter how the meeting happened – it happened. To a pope who seeks to broaden the appeal of Catholicism in the US – where the church is flagging in funding, mired in horrific sexual abuse scandals and facing a falling membership – he has done himself no favors by holding a private meeting with Davis and her husband.

Pope Francis’s actions in this case speak much, much louder than his many seemingly good words.