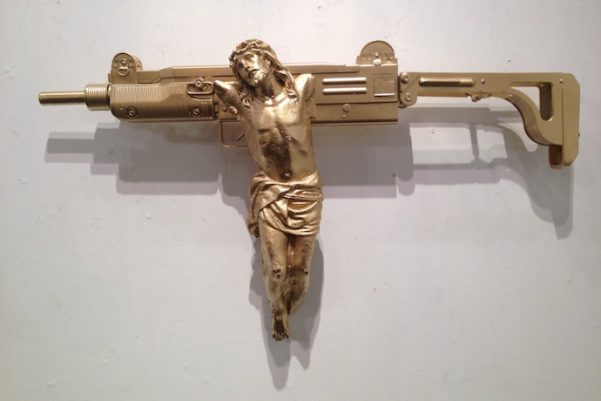 The U.S. Catholic bishops met in Huntington Beach, California this week, just days after the Orlando massacre. And despite the fact that the church’s most powerful prelates were all gathered together at a time when the nation is desperate for pastoral leadership to counter the vitriol spewing from Donald Trump and his ilk, this was the official, and only, USCCB statement on the massacre released by conference president Archbishop Joseph Kurtz:

Waking up to the unspeakable violence in Orlando reminds us of how precious human life is. Our prayers are with the victims, their families and all those affected by this terrible act. The merciful love of Christ calls us to solidarity with the suffering and to ever greater resolve in protecting the life and dignity of every person.

It’s an amazingly tepid, generic statement in the face of such tragedy that touches on two areas of special concern to the bishops: guns and gays. While the bishops’ conference officially backs gun control proposals put forward by President Obama and the Democratic Party, it has put almost no energy into pushing for them. Imagine if Catholic bishops rallied from the pulpit against politicians who failed to vote for common sense gun control legislation with the same energy they put into opposing John Kerry and other Catholic politicians who support abortion rights? Or with the sustained effort they put into opposing the contraceptive mandate in the Affordable Care Act, with their Ad Hoc Committee on Religious Freedom, their annual “Fortnight for Freedom” campaign and countless statements and interventions by leading bishops?

The bishops’ silence on animus toward the LGBT community is more understandable, although no more acceptable, given their own role in fostering it by suggesting that the legalization of same-sex marriage was some kind of cultural Armageddon and that refusing to accommodate gay people is a protected form of religious martyrdom. Only Bishop Robert Lynch of St. Petersburg, Florida, had the guts to admit that the Catholic Church was complicit in fostering a culture of hostility toward the gay community:

…sadly it is religion, including our own, which targets, mostly verbally, and also often breeds contempt for gays, lesbians and transgender people. Attacks today on LGBT men and women often plant the seed of contempt, then hatred, which can ultimately lead to violence. Those women and men who were mowed down early yesterday morning were all made in the image and likeness of God. We teach that. We should believe that. We must stand for that.

By comparison, in his statement on the massacre, San Francisco Archbishop Salvatore Cordileone revealed the dark heart of what so many in the church’s leadership believe to be the truth about LGTB individuals:

…we stand in solidarity with all those affected by this atrocity, regardless of race, religion, or personal lifestyle.

That’s right, it’s too bad your “personal lifestyle” got you killed. Just as the Catholic Church still insists on referring to LGBT individuals as “people who experience same-sex attraction,” the church offers its sympathy with a not-to-pointed reminder that ultimately it believes homosexuality, bisexuality and transgenderism are lifestyle choices that can be rejected, and indeed must be rejected, to be fully accepted by the church.

Similarly, Kurtz’s official statement, with it’s reminder of how “precious life is” and call for “protecting the life and dignity of every person,” is a not-so-subtle reference to abortion. Nothing like using a national tragedy that has absolutely nothing to do with abortion to push your anti-abortion agenda, boys.

But conservatives within the church will continue to push the line that it’s an “abortion mentality”—as well as a lack of respect for the special sacredness of heterosexual, procreative sex—that allows all forms of violence to flourish, ultimately making gay people, not guns, responsible for the violence visited upon them.