An ideological tug of war over the firing of a Rhode Island church music director for marrying his same-sex partner illustrates the confusion that permeates some U.S. Roman Catholic parishes over Pope Francis’s words on homosexuality.

Francis’s famous declaration “Who am I to judge?” in 2013 energized Catholics who had pushed the church to accept gays and lesbians. Now, some gay Catholics and supporters who hoped for rapid acceptance find themselves stymied by many bishops and pastors.

Francis is being cited by both the music director, Michael Templeton, and by Providence Bishop Thomas Tobin, known for taking a hard line on church teaching about marriage and abortion. Tobin has criticized Francis, writing after the pope’s summit on the family two years ago that “Francis is fond of ‘creating a mess.’ Mission accomplished.”

The pope has upheld Catholic teaching on homosexuality, reiterating the church’s opposition to same-sex relationships. But his shift in tone and broad statements about mercy have left a trail of comments that amount to a Rorschach test open to interpretation, say those who have closely followed Francis.

“Pope Francis has not said, ‘Here’s what you should do in a parish where you have a music director who has married his partner of the same sex,’ ” said Rev. James T. Bretzke, a professor of moral theology at Boston College. “Pope Francis is articulating general principles: forgiveness and mercy and not harsh judgment. But how you handle a particular case like this, he has been very reluctant to weigh in on it.”

That means a gay Catholic’s fate depends on his diocese or individual pastor. Templeton, 38, says he was called in last month and fired from the job he held for five years at the Church of St. Mary. The pastor, appointed in July, told him someone had sent him a 2015 Associated Press article that included details about Templeton’s wedding. A representative from the Providence Diocese also attended. At the end of the meeting, disappointed and hurt, Templeton cited Francis. 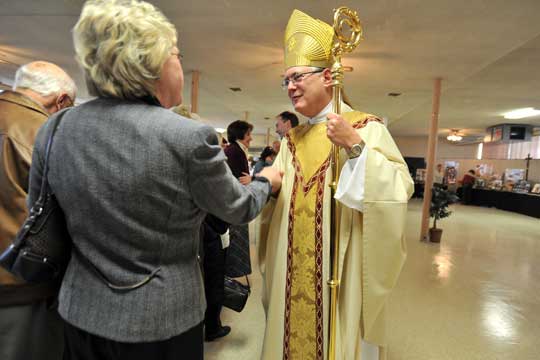 “This seems truly inconsistent with the teachings of Pope Francis,” Templeton said he told them.

The firing caused an outcry in the parish. A fellow employee resigned minutes after Templeton’s firing. Several lay leaders also resigned and dozens of parishioners have left, including most of the church’s 20 to 30 gay members, according to people interviewed by the Associated Press.

Many cited Francis’s example, saying the firing was in conflict with his declaration that 2016 be a “Year of Mercy.”

The pastor, Rev. Francesco Francese, referred comment to Tobin’s office, and Tobin declined a request for an interview.

Tobin issued a statement to The Providence Journal saying church employees and volunteers are “expected to live in a way that is fully consistent” with church teachings. If a person engages in activity that contradicts those teachings, “that individual leaves the Church no choice but to respond,” Tobin said.

“When church leaders have to respond to situations involving persons living an openly ‘gay lifestyle’ these days, we’re often scolded and told that we should be ‘more like Pope Francis,’ presumably the ‘Who-am-I-to judge’ Pope Francis,” Tobin wrote.

He listed several examples that “critics should also remember,” including that Francis fired a priest who was working in the Vatican upon learning the priest was gay and in a relationship.

In the past few months alone, Francis has made statements or taken actions that give fuel to both sides.

Francis underscored his emphasis on mercy over defending orthodoxy with his first U.S. picks for cardinals, announced Sunday, choosing bishops who have taken a more welcoming approach to gays and others who have felt alienated from the church.

Asked this month about how he would minister to transgender Catholics, Francis responded: “When someone who has this condition comes before Jesus, Jesus would surely never say, ‘Go away because you’re gay.’ ” At the same time, he recently supported Mexican bishops working against a push to legalize same-sex marriage. New Ways Ministry, which advocates for gay Catholics, has documented around four dozen cases during Francis’s tenure where people have been forced from positions in Catholic institutions or faced other negative consequences for reasons such as being in gay relationships or advocating for gay rights.

Francis DeBernardo, executive director of New Ways, said gay Catholics continue to see problems in places with conservative bishops, such as Providence. Tobin, he said, was interpreting Francis too narrowly.

Before Francis, “people were afraid to even say the words gay or lesbian,” DeBernardo said. “I do think he’s taken an important step that could lead to further steps. I’m not certain, I don’t think he will make a change in church doctrine, but I think he is laying the groundwork for future changes.”