Bill Donohue, for those of you who aren’t mackerel snappers, is the Roger Ailes of the Catholic Church: a big, fat CHAVALA who depends on the elderly to fund his comfy lifestyle and be able to trash good people for a living. He’s the head of the Catholic League, which is as relevant to modern-day Catholics as the rhythm method yet still gets play in conservative media. We’ve featured Donohue’s whining before—like when he tried to accuse me of targeting only Catholic pedophiles instead of ALL pedophiles, or when he inadvertently defended Eleuterio Ramos, OC’s worst-ever pedophile priest, a guy who admitted to molesting “at least” 25 boys.

And now Donohue returns to Orange County with another whiny screed—although he doesn’t dare call out his target by name. In a May 18 press release titled “Victims’ Pros Lie about NY Archdiocese,” Donohue rails against the Survivors Network of Those Abused by Priests (SNAP), which has only been one of the most important organizations in the United States fighting against pedo-priests and their enablers in the Catholic Church. Donohue has never liked them because they do a great job, and he’s now mad that “someone whom we have never heard of has surfaced demanding that the New York archdiocese publish the names of six miscreant priests, the implication being that there is a cover-up.

“This is a non-starter,” Dononhue continues. “The names of the offending priests have already been published by the archdiocese. It is scurrilous to imply otherwise. The only real story here is how far some will go to try to discredit the Catholic Church.”

What the hell is the lace-curtain Irish crying about? He provides no links, no context, no nada in his write-up (which you can go ahead and Google on your own). But the person he was targeting is someone well-known to OC Weekly readers, a heroine we should all emulate.

She’s the Western regional director for SNAP, and someone who has long advocated for sex-abuse survivors because she herself is one: a music teacher at Mater Dei High abused her, and school and diocesan officials long stonewalled her about it. Casteix held a press conference last week talking about the pedophile protectors at the New York archdiocese, cretins of whom Donohue laughably says, “When it comes to clergy sexual abuse, the New York Archdiocese has one of the best records in the nation.”

Facebook Live. None of the New York press present quoted Casteix in their stories, which means Donohue has no life because he watched a Facebook Live segment. But why didn’t Donohue have the stones to call out Casteix by name? Does anyone really buy Billy Blob’s shit that he “had never heard of” Casteix, who’s only been a national presence on the Catholic Church sex-abuse scandal for about 15 years? How the hell can Donohue continue to get fatter with every passing year? 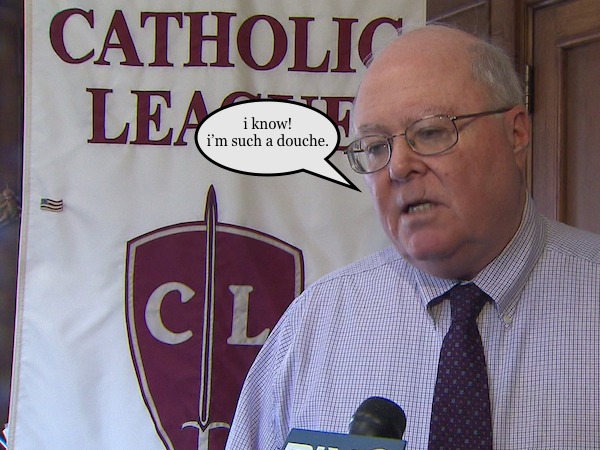 So many questions, but at least we have two answers: Casteix is a secular saint; Donohue is a PENDEJO. Hey, Billy: Learn from St. Joseph and get a real job.