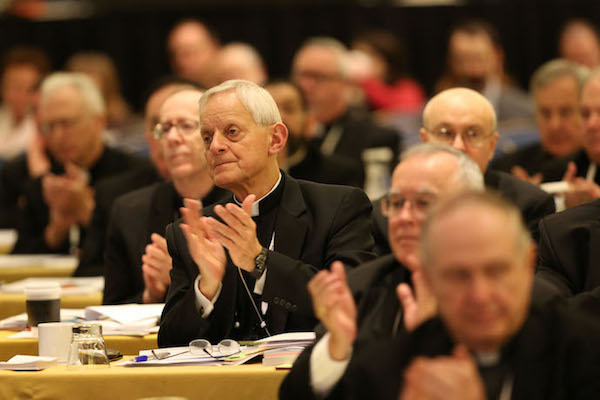 When President Obama proposed requiring health plans to cover common contraceptives without charge, the Catholic bishops howled like the world was coming to an end. Dire warnings about the future of religious liberty were issued on a regular basis by Cardinal Timothy Dolan, then-head of the U.S. Conference of Catholic Bishops, who personally went to the White House to complain to Obama. A special committee was formed. Legislators were lobbied. Lay Catholics were called on to protest. A scorching letter was read aloud by bishops at masses across the country. And threats were made about the Catholic vote in 2012.

But now, even as the clearly deceptive and immoral Trump administration plunges further into chaos and the Republican Party uses it as a distraction as it plots to take health care away from millions, the nation’s Catholic bishops have remained largely silent.

There have been no condemnations of Trump’s authoritarian tendencies, attacks on the press and outright mendacity. And while the bishops admit the GOP health “reform” efforts would be detrimental to the poor and marginalized and “fundamentally alter the social safety net for millions of people,” they have limited their objections to written statements from Bishop Frank Dewane, chairman of Committee on Domestic Justice and Human Development, a little known backbencher with virtually no profile in the national media.

As Michael Sean Winters noted in the National Catholic Reporter:

…there was no “postcard campaign” like the bishops launched on previous issues of less significance, no full court press as it were. It is clear that so long as they get rid of the contraception mandate, many bishops are willing to look the other way if millions are thrown off the insurance rolls.

It’s likely that the bishops are holding their tongues because, while they don’t love the health plan—except for the part that would further limit abortion services by private health plans—they still hope to get several much-wished-for goodies from the Trump administration beyond the promised roll-back of the contraception mandate. Here are three things the bishops are still hoping to gain from Trump and the GOP.

Catholic leaders are meeting with GOP lawmakers and members of the Trump administration, hoping to shape a federal plan they believe could spur a rebirth of parochial education. The Trump administration’s consideration of a federal tax credit scholarship program could be a boon for Catholic schools … Catholic leaders are seizing the moment, pushing for a federal program that comes with few constraints. “We see this as game-changing,” said Greg Dolan, associate director for public policy for the U.S. Conference of Catholic Bishops’ Secretariat of Catholic education.

But, as New York Times reports, under Trump a number of anti-contraception activists have been given prominent roles in the administration. They are moving not just to finalize a rule that would allow any entity to opt-out of the contraceptive mandate for any reason, which has long been on the bishops’ wish list, but have a history of attacking contraception in general.

Katy Talento, who is now a White House domestic policy aide, has warned of the (false) health risks of oral and other hormonal contraceptives, charging that they are carcinogens, ruin women’s fertility and cause miscarriages. And, like the bishops, she suggests that natural family planning, which has the highest failure rate of any contraceptive method, is a suitable alternative:

“There are other ways to avoid pregnancy and to space children’s birth if necessary and appropriate, if a family or a woman wants to do that,” Ms. Talento said. “You don’t have to ingest a bunch of carcinogens in order to plan your family.”

Mathew Bowman, who is now a lawyer for the Department of Health and Human Services, came from the Alliance Defending Freedom, where he represented Conestoga Wood Specialties in its successful challenge, along with Hobby Lobby, to the contraceptive mandate. Bowman argues that there is no evidence that the mandate reduced the number of unintended pregnancies and has disputed that there are any ill health effects related to unintended pregnancy.

The bishops also would love any GOP health reform plan to include a wide-ranging “conscience” clause that would allow health care providers to refuse to provide any service for moral or religious reasons, which could be used to deny services to LGBT patients or single mothers. When it comes to the Trump administration, the bishops have apparently decided to hold their noses and see how much on their wish list they can get, literally selling their souls to the devil.