One of the Boston Globe reporters made famous in the movie “Spotlight” has a new bombshell story on the Catholic Church – thousands of people claim they were fathered by priests.

Globe Spotlight reporter Michael Rezendes appeared on CBS This Morning Wednesday to discuss the first part of his report, “Children of Catholic Priests Live with Secrets and Sorrow.”

“We know there are many more than people assume, probably in the thousands. Just recently, about two years ago, a son of a priest in Ireland set up a website called Coping International and he’s heard from scores of people from all over the world who are the sons and daughters of Catholic priests,” Rezendes said.

“Jim spent many years tracking down evidence that a priest was his father. I was impressed with what he suffered, the pain he endured, and I was impressed with his detective work, but still it was just one person and it wasn’t until Vincent Doyle called me and gave me the information he collected through his website that I realized this was a systemic situation and deserved my full attention,” Rezendes said.

“I think it’s very similar to the situation with clergy sex abuse, whenever there was a scandal, the church treated the situation as if it was exceptional, when in fact it was systemic. And I think we’re looking at the same thing here.”

Many of these children of priests struggle in silence and secrecy as they grow up. 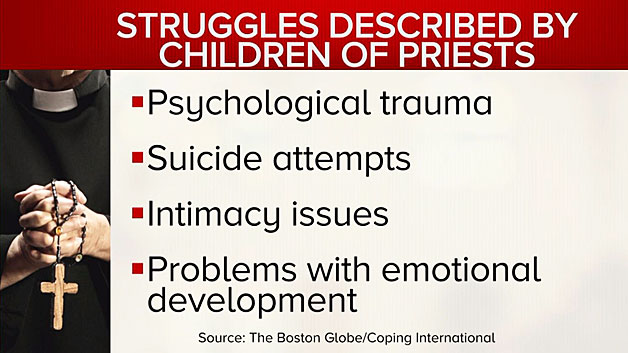 “These people are coming together, it’s remarkable to see this community being formed right now as we speak and they would like the church, the Vatican to put some policies in place to end the secrecy and also just give some bishops a little bit of guidance on what to do when they learn one of their priests has fathered a child, because right now they have no guidance.”

The Vatican declined to comment on the Boston Globe story.

“If a priest fathers a child, he has a moral obligation to step aside from ministry and provide for the care and needs of the mother and child. In such a moment, their welfare is the highest priority,” Boston Cardinal Sean O’Malley said in a statement to CBS News.

“I think Cardinal O’Malley’s statement is important because I think more often than not the first reaction of a priest is to cover up the fact that he has become a parent. And what Cardinal O’Malley is saying, and I think this is in line with some of the things Pope Francis has said is, ‘No, if you’re a priest and you father a child, your first responsibility is no longer to the church, it’s to your child,” Rezendes said.

Part two of the Spotlight report can be found in the Boston Globe Sunday.