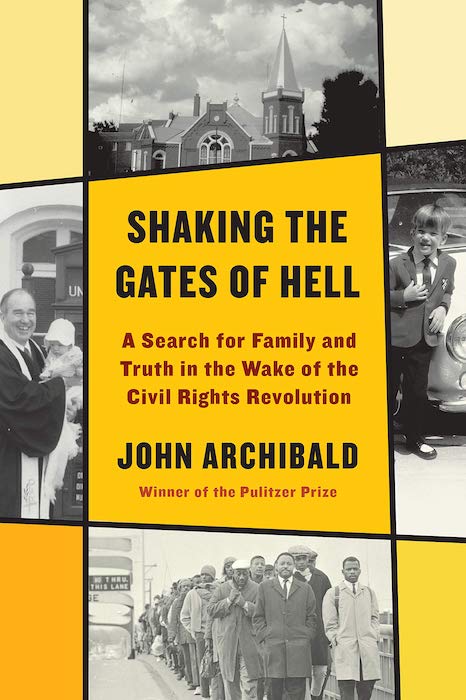 When John Archibald won the Pulitzer Prize for his Birmingham News columns in 2018, the citation read, “For lyrical and courageous commentary that is rooted in Alabama but has a national resonance in scrutinizing corrupt politicians, championing the rights of women and calling out hypocrisy.” Archibald dismisses this assessment in his questioning and questing book “Shaking the Gates of Hell,” a fascinating blend of family memoir and moral reckoning. “I’m a coward,” Archibald writes. “My pulpit is a pen. It is meant to provoke and to question, but it does not depend on tithes and diplomacy and butts in pews.”

He’s drawing a contrast with his father, a White Methodist minister whose silence from the pulpit during the civil rights struggles’ most violent years troubles his son as he looks back from the vantage point of middle age. “I believe Dad feared losing his congregation,” Archibald writes, “that it was better to have subtle influence than outright rejection.” Methodist ministers who spoke openly about racial justice were sent to tiny churches in remote towns, while his father rose steadily through assignments in northern Alabama to a desirable post in Decatur. There he began to preach more about civil rights — quiet sermons, careful not to alienate parishioners who considered themselves good Christians while ignoring or even condoning the police terror unleashed on African Americans who dared to claim their legal rights.

That seemed too little, too late to Archibald at age 50, when shortly after his father’s death he reread the Rev. Martin Luther King Jr.’s measured but damning words in “Letter from a Birmingham Jail”: “I felt that the white ministers, priests and rabbis of the South would be among our strongest allies,” King wrote in 1963 (the year Archibald was born). Instead “too many . . . have been more cautious than courageous and have remained silent.”

Anyone tempted to conclude smugly that hesitancy to make waves or make enemies is a thing of the past — or just of the South — will swiftly be corrected by Archibald: “You can see it today, as then, when protesters demonstrate against police shootings or economic injustice or governmental neglect,” he comments. “The well-heeled moderate calls for order, and peace, and caution . . . the silence persists.”

The Rev. Archibald kept John in Decatur public schools after their court-ordered integration in 1970 and signed up his son for an integrated Cub Scout pack. “Your dad was on the right side,” a Black minister from Decatur tells Archibald, arguing that educating Southern whites was as important as activism on the front lines. Archibald isn’t necessarily convinced. “My parents hammered into their children that all people — all people — were entitled to the love and respect and the justice we took for granted,” he writes. “They were people of goodwill. . . . What if that’s not enough?” His book is an attempt to answer that question.

At first it seems odd that Archibald’s musings about his father’s silence should be intertwined with a loving, often very funny memoir of growing up as the youngest of four in a clan that prized adventurousness and outdoor activity — so much so that “somebody almost died on every one of our camping trips.” But these stories spotlight the contradiction between the Rev. Archibald’s caution about publicly supporting civil rights and the lesson he privately imparted to his children: “Life’s great memories were the ones with the greatest risk.” Archibald’s personal recollections vividly demonstrate the conflicts experienced by people rooted in traditional values during a period of rapid social change, when a liberal interpretation of those values offends their conservative community

This was particularly evident after Archibald’s eldest brother Murray came out in the 1970s. (The man he brought home, who became his husband in 2013, was an Eagle Scout and a fraternity member who played college football.) His parents embraced Murray without reservations, but his father’s sermons were confined to parables about the prodigal son and unconditional love. Archibald admits that he was no more forthcoming about his gay brother when he went to college: “I just never found reason to talk about it . . . that’s the way silence works, I guess. You find good reasons, fine reasons, perfectly reasonable reasons to say nothing at all, to stand for the way things are.”

Archibald’s point is not to beat up ourselves or the people we love over the failures of the past, but to learn from them and do better. Not long before he died, the Rev. Archibald told his youngest son he was proud that he had written about racial injustice in his newspaper columns. “I tell myself it is his blessing to say the things he was never quite comfortable enough to say,” Archibald writes. “I am forgiving of my father. At least he saw all as his neighbors, and helped them as he could. I am less forgiving of the church.”

Archibald left the Methodist Church in 2019 after it strengthened its ban on same-sex marriage and gay clergy, bitterly comparing the language used by “traditionalists” with that used in the 1950s to justify keeping the church segregated. Murray remained, choosing their father’s path of working for change from within. Neither decision was easy. Archibald’s honest account of one family’s uneasy journey through the civil rights and gay rights revolutions makes it clear that there are no easy decisions — or answers — when grappling with issues of faith and social justice.