More than 100 Roman Catholic parishes in Germany held services to bless gay couples, in defiance of the Vatican’s refusal to recognize same-sex unions.

More than 100 Roman Catholic parishes in Germany offered blessings to gay couples on Monday in defiance of church teaching and their own bishops.

The call for nationwide blessings came in response to a decree issued by the Vatican on March 15, reinforcing the church’s prohibition of priests asking for God’s benevolence for gay couples, stating that God “does not and cannot bless sin.”

A group of 16 German priests and volunteers organized a petition that within days collected more than 2,000 signatures. Encouraged by the response, they decided to take their action one step further and declare May 10 — chosen because of its association with Noah, who in the Bible is recognized by God with a rainbow, a symbol that has more recently been adopted by the L.G.B.T.Q. community — as a day to hold blessing ceremonies for any and all couples, but especially those in same-sex unions.

“In view of the refusal of the Congregation for the Doctrine of the Faith to bless homosexual partnerships, we raise our voices and say: We will continue to accompany people who enter into a binding partnership in the future and bless their relationship,” the group said in a statement. “We will not refuse a blessing ceremony.”

The Vatican had no comment on Monday, but the head of the conference of Roman Catholic bishops in Germany, Georg Bätzing, who is also the bishop of Limburg, rejected using public blessing ceremonies as what he called “instruments for symbolic actions on church policy or for protests.”

“It is part of the pastoral ministry of the church to treat all of these people fairly in their respective concrete situations on their life’s journey and to accompany them pastorally,” Bishop Bätzing said in a statement, speaking for the country’s bishops. “In this context, however, I do not consider public actions such as those planned for 10 May to be helpful or a way forward.”

The Roman Catholic Church teaches that marriage can only be between a man and a woman, because that is God’s plan for the creation of life. Church doctrine says that while gay people must be treated with dignity, homosexuality is “intrinsically disordered.” Pope Francis has not changed this teaching, but has occasionally raised the hopes of gay Catholics by speaking of the need to love and welcome gay and transgender people.

The German church is among the most powerful and liberal in the world, and Roman Catholics everywhere were watching the response to the blessings for signals of how the church might respond to attempts at reform from those in the pews and from the priests who are often among those most active in finding ways to include gay men and lesbians in the church.

“There has been this incredible discussion in Germany about same-sex couples specifically that has not taken place anywhere else,” said Francis DeBernardo, the executive director of New Ways Ministry, which represents gay and lesbian Catholics in the United States. “No other group has done something like that.”

A few German parishes held blessing services on Sunday and dozens more took place Monday, many of them in churches in the heavily Roman Catholic western regions of the country, home to many of Germany’s most liberal Catholics. Some were streamed live, while others offered virtual blessings over social media, “whenever and wherever you want.”

By contrast, only a few parishes in the heavily Roman Catholic southern state of Bavaria, the more deeply conservative region where Pope Benedict XVI grew up, held services.

Churches that were not offering ceremonies were encouraged to fly a rainbow flag or other banners recognizing and celebrating love in all of its forms as worthy of God’s graces.

The Rev. Bernd Mönkebüscher, pastor in the Church of St. Agnes in the western town of Hamm and one of the initiators of the campaign, said that every Valentine’s Day, his parish holds blessings for all couples, including those from same-sex unions and those who remarried after a divorce.

“We held a blessing service this Valentine’s Day, but it was important to us in view of this story from Rome to send a clear signal that the church must recognize, honor and appreciate life in all of its many colors,” said Father Mönkebüscher, who identifies as gay. “It is an important gesture toward those people who the church for years, if not decades, has viewed as second-class citizens.” 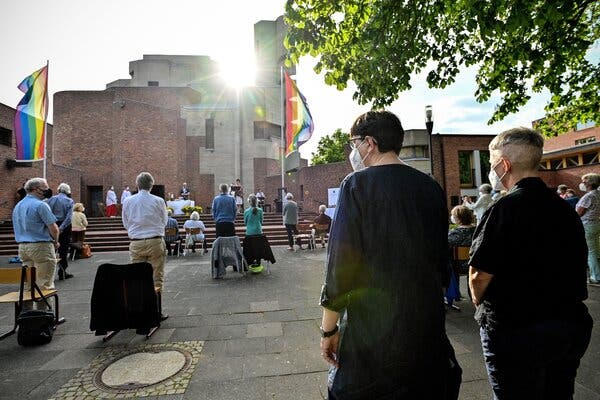 At least 30 couples had registered to take part in the ceremony in his parish on Monday, he said, adding that the number of participants was limited because of restrictions to prevent the spread of the coronavirus. “We are fully booked out,” he said.

During the ceremony, Father Mönkebüscher walked around the nave, approaching couples who sat in pairs, socially distanced and masked. They rose as he placed a hand on their shoulders and spoke a blessing as they bowed their heads. After one lesbian couple had received their blessing, they dropped their masks and shared a kiss, wiping away tears.

Not everyone has been receptive of the initiative. One parish in Bavaria received threats from members of an arch-conservative Roman Catholic group and had to call the police to ensure the safety of participants at their ceremony.

The initiative is the latest strain between the Vatican and the Roman Catholic Church in Germany. Many parishioners in Germany have left the church, including those frustrated with what they see as an outdated approach to sexual morality and a failure to punish priests accused of abusing children.

According to official statistics, 272,771 people formally quit the Church in 2019, a record number that helped to galvanize efforts among the bishops to discuss with the church a series of issues they believe were contributing to the loss of members. Among them were the role of women in the church, its teachings on sexual morality, priestly celibacy and clerical power structures.

In 2019, they began a series of talks on these topics, discussions of which would be off-limits for the church in many other countries. The talks were to take place among the faithful and church leaders over the course of two years but were extended because of restrictions on gatherings that were introduced last year at the outbreak of the pandemic. They are now to continue into February 2022.

Among those leaving the Church in Germany are many same-sex couples, who are tired of feeling they are not accepted for who they are, said the Rev. Reinhard Kleinewiese, who held a blessing at the Church of St. Mary in the western town of Ahlen on Sunday evening. Ten couples attend, all of them heterosexuals.

“We can’t ignore the fact that a lot of homosexual couples have already left the church. There are many who don’t come anymore,” Father Kleinewiese said. “Nevertheless, it is good and important for this situation and beyond that we make clear that we are not in agreement with Rome on certain issues and prohibitions.”