A right-wing outlet weaponized Grindr data it obtained to target a prominent, hypocritical priest. It’s a disturbing extension of the religious right’s attack on any LGBTQ people in the Church. 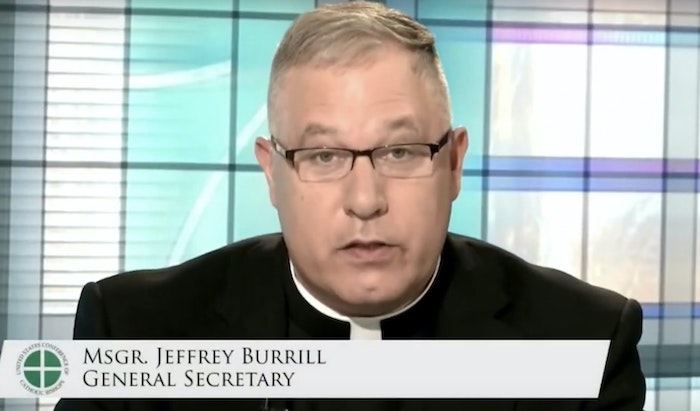 When the news broke that Monsignor Jeffrey Burrill had been caught trawling for hookups on Grindr, the immediate reaction for many was one of disgust at his hypocrisy. Burrill, who had served as secretary of the U.S. Conference of Catholic Bishops (USCCB) before resigning, was right in the thick of all the Church’s attacks on LGBTQ rights. At the same time that he was promoting anti-LGBTQ attacks, he was also having apparently sex with other men.

But the story is a lot more complicated than just outing a hypocrite. It’s also a lot more frightening.

Related: Anti-gay priest on trial for allegedly having sex with men to help “heal” their homosexual desires

Burrill was outed by The Pillar, a right-wing Catholic outlet that says it obtained anonymous Grindr data legally, and then reconstructed it to identify signals coming from Burrill’s phone.

Grindr denies that this is possible, but the app has been criticized for years for its security practices, and they were fined $11 million by a Norwegian agency last January for privacy violations.

For its part, The Pillar was vague about how it got the data, other than to say it was “commercially available,” suggesting that they paid for it. It also didn’t say who conducted the analysis of the data.

Presumably, it wasn’t done by the site’s founders, JD Flynn and Ed Condon, but both of them previously worked at the Catholic News Agency, a conservative outlet, where they developed a reputation for taking aim at the hierarchy.

“Both regularly sprinkle their tweets with references to church law and confidently — some say cockily — tout their own interpretations as the most pure and accurate,” the Washington Post reported.

That sense of moral superiority permeates the reporting on Burrill. The Pillar didn’t target Burrill just for being a hypocrite. They targeted him for (presumably) being gay.

The column outing Burrill — which carries no bylines — is riddled with the language of high moral dudgeon. Burrill engaged in “serial and illicit sexual activity” and “serial sexual misconduct,” it reads.

The column even goes so far as to link Burrill hooking up with men with pedophilia.

“There is no evidence to suggest that Burrill was in contact with minors through his use of Grindr,” the article stated, “but any use of the app by the priest could be seen to present a conflict with his role in developing and overseeing national child protection policies, as Church leaders have called in recent months for a greater emphasis on technology accountability in Church policies.”

The article then went on to cite instances of other priests using hookup sites to solicit sex with minors.

Fr. James Martin, the Jesuit priest who has been advocating for the Church to adopt a more compassionate approach to LGBTQ people, noted the article “repeatedly conflated homosexuality with pedophilia, all under the guise of a journalistic ‘investigation.’”

The Pillar article raises two important issues in its fallout. The first is the weaponization of data to target individuals on ideological grounds. Fr. Martin has been the focus of conservative ire for his pastoral work, for which he was recently commended for by Pope Francis. It’s virtually a sure thing that The Pillar writers are working feverishly to find data that they can tie to Martin and others.

The second is the ongoing attempt by the Catholic right to rid the Church of even celibate gay priests, and thus try to pin the blame for the Church’s ongoing pedophilia scandal — enabled by many of the figures that the right admires —on gay priests.

The Church says celibate gay people are fine. It’s gay sex that’s the sin. The right doesn’t care about such distinctions. They want all LGBTQ people, priests or laity, gone. They’d also like to oust any of their allies or supporters, including Pope Francis, whom they view as a fellow traveler.

Fr. Martin rightly points out that data mining could be used to target virtually anyone the right disagrees with.

“Why stop at priests?” he asks. “Why not spy on unmarried lay teachers at Catholic schools? Perhaps they’re sexually active.”

But the right has shown no inclination to go after anyone other than LGBTQ people. The dozens of teachers and choir directors fired has no parallel among any other group.

Flynn and Condon are promising that more revelations will come from the mining data they obtained. They have turned it over to the Archdiocese of Newark citing “patterns of location-based hookup app use at more than 10 archdiocesan rectories and clerical residences.”