— AIDS and the Catholic Church 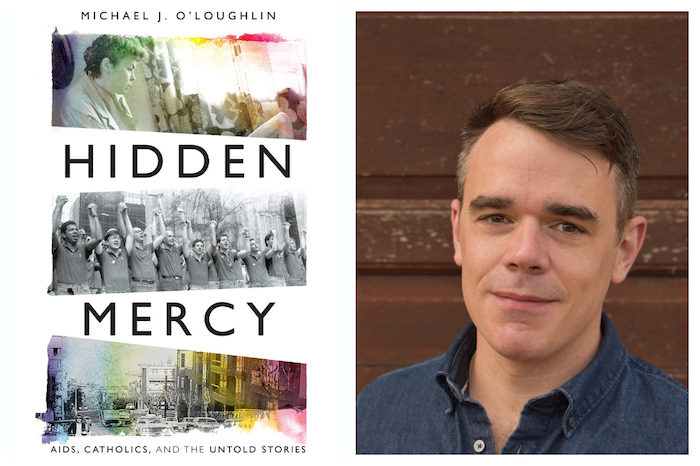 Books about gay people struggling with their faith are more common than they ought to be. Most take the form of self-therapy for their authors and, as such, are concerned mostly with the interior life of the author. Unfortunately, in these late post-Stonewall days, we gays are by and large a pretty boring and well-assimilated bunch, and our interior lives tend to have all the magnetic fascination of a pair of pleated khakis. It was with no small amount of gratitude, then, that I read the introduction to Michael J. O’Loughlin’s book, in which he eschews such navel-gazing and instead reckons with his Catholic faith by giving his readers an oral history titled Hidden Mercy: AIDS, Catholics, and the Untold Stories of Mercy in the Face of Fear.

O’Loughlin has spent nearly 12 years as a correspondent for America magazine — an explicitly Catholic magazine run by the Society of Jesus, popularly known as the Jesuits. His background is immensely helpful here, because he intuitively grasps a principle that eludes a lot of reporters on the Catholic Church in the U.S., namely: the Catholic Church is very, very large, to a degree that there’s no real way to wrap your head around all of it, and the combination of that size and its division into dioceses run by bishops who answer only to the Pope renders it nearly ungovernable. This means, above all, that there is almost never a single “Catholic response” to a social question, only responses by Catholics. Perhaps the greatest strength of O’Loughlin’s oral history approach is that, by keeping close to the experiences of people both inside and outside the official Church hierarchy, he allows the tensions and contradictions that characterized the Church’s reaction to the AIDS crisis to emerge and to stand as they are, without trying to impose a structure or resolution that doesn’t exist.

Hidden Mercy is the latest in a series of high-profile histories of the AIDS crisis, and the first one to deal in any sustained fashion with the Church as a major player in the events of the period. The American cultural memory of AIDS has been shaped largely by two works of dramatic fiction: Larry Kramer’s The Normal Heart and Tony Kushner’s Angels in America. Both are powerful artistic responses written in the midst of the crisis, and both take severe liberties with the historical record to score their dramatic points. They are valuable records in their own way, but neither makes much time — Kushner none at all — for the role of the Catholic Church in the crisis, despite its inescapable influence on the lives of everyone in New York, where both plays are set. You don’t even have to be Catholic for the Church to shape your life in ways large and small — Catholic nonprofits operate some of the largest hospital systems in the United States, and in New York, many people still give silent thanks for the annual suspensions of alternate-side parking rules on the Church’s major feast days.

The two other recent books on the AIDS crisis, Sarah Schulman’s Let the Record Show and Peter Staley’s memoir Never Be Silent, are concerned primarily with ACT UP and its protest campaigns, in which the Church often appears as an opponent. But even Schulman and Staley’s books hint at a more complicated picture: their pages are full of Catholics at odds with bishops or pastors, and as O’Loughlin ably shows, even the thoroughly institutional elements of the Church were often at odds with one another. The stories he shares illuminate how people both inside and outside the hierarchy of the Church reckoned with their place in this institution that so often seemed both powerful and helpless at the same time.

Indeed, of all the narrative threads through which O’Loughlin moves, the two most prominent are stories of care. The first of these is Sister Carol Baltosiewitch, a Franciscan religious sister from Illinois who flew to New York to learn about treating AIDS patients; the second is Father William Hart McNichols, a Jesuit priest who began celebrating healing Masses for people with AIDS and continued ministering to them both officially and unofficially until 1990, when his Jesuit superiors asked him to step back from his AIDS work due to the stress it was putting on his health; though he left the Jesuits in 2002, he remains a priest. We also meet David Pais, a man who got involved with Gay Men’s Health Crisis and HIV education; and Ramon Torres, a physician who worked with AIDS patients and struggled against the restrictions placed on him by his working for a Catholic hospital; Michael Hanrak, a former member of the radical Catholic Worker movement, convinced the Diocese of Oakland to convert a home intended for sick priests into a home for low-income people with AIDS.

Institutions also emerge as characters: much of the action in New York revolves around St. Vincent’s, the hospital that was both the largest center for AIDS care in the country and the target of repeated protest actions for its official insistence that its doctors ought to provide top-shelf medical care to men who contracted AIDS through unprotected gay sex but could not under any circumstances tell those men to make condoms a part of their sodomitical recreation. And on the West Coast, O’Loughlin devotes an entire chapter to Most Holy Redeemer, a parish in the heart of the Castro that reinvented itself as a spiritual home for gay Catholics and developed the best homeless ministry in the Bay Area, because it turns out that concentrating San Francisco’s supply of hairdressers, salon workers, and childless physicians in one place gives you lots of ways to help people feel healthier and more dignified.

O’Loughlin is at his most effective in showing how the care and advocacy work of these people and these places was opposed at nearly every turn by other actors in the Church. There is no shortage of historical evidence on either side: American Catholics are politically divided in nearly identical proportions to Americans in general, and plenty of Catholics remain unashamed of the Church’s hostility to LGBT people and to AIDS protestors. They certainly don’t suffer from the moral amnesia that overtakes so many avowedly liberal institutions when asked about their conduct during the AIDS crisis. On top of this, since Catholic institutions are extremely long-lived and generally keep records, O’Loughlin can render these tensions and conflicts in much sharper relief than is usually available for other parts of the AIDS crisis. Indeed, given the outsize role of the Church in coordinating AIDS care in major gay epicenters like San Francisco, Chicago, and New York, it may very well be the largest institutional holder of healthcare records from a time when methods and standards of care seemed to change almost monthly. It can be tempting to center AIDS history on large, highly visible protest actions and on the internal drama of the groups who organized them, treating other histories as sideshows. O’Loughlin’s subject matter is clearly not a sideshow: this book is an essential historical addition.

That said, this is still AIDS history, and that means there are gaps in our knowledge that can never be filled because so many are dead and those who knew them are dead or dying. Late in the book, O’Loughlin recounts being at a reception at a Vatican museum, where he spotted John Quinn, the former Archbishop of San Francisco who oversaw the archdiocese’s mobilization of resources for AIDS care and who strongly supported the gay outreach efforts at Most Holy Redeemer. Quinn was in his eighties at the time, but he seemed very supportive when O’Loughlin described his project. “‘Yes, there are so many stories,’ he replied, a note of sadness in his voice. ‘So many young people died.’” Then the bishop recounts a story of a young man who, after finding out he had HIV, told his mother he was gay to prepare her for what lay ahead. “‘Twenty-two years ago, my only mistake,’ the mother said, wrapping her arm around her son, ‘was not having an abortion.’” These stories, too, are worth preserving, and this one survives only through a chance encounter with a very old man. In one of the book’s most sobering moments, Quinn offers to talk with O’Loughlin again once they’ve both gone home to the U.S. Their conversation never happened: the archbishop fell a few days later and was admitted to the hospital. Within six months he was dead, and another link to history was broken.

This is one of the book’s two real brushes with the Catholic hierarchy, whose members lurk for the most part in the background of its narratives, stymieing the protagonists with unappealable decisions, like the 1986 letter from the Congregation for the Doctrine of the Faith (the central body that adjudicates questions of Catholic doctrine — think Supreme Court meets Académie Française meets DMV, but with better robes and many more closet cases) that withdrew all official support for any LGBT Catholic organization that didn’t loudly proclaim the evils of sodomy. But at one point, Fr. Bill McNichols recounts encountering Cardinal John O’Connor, the Archbishop of New York, whom Fr. Bill thought responsible for cancelling a conference where he was to present. It turned out that the cardinal knew nothing about it, and for the most part approved of Fr. Bill’s AIDS ministry. The picture we get, through Fr. Bill, is of a figure trapped by his office: less a Prince of the Church and more an affable company man. Certainly O’Connor, by all accounts, did care deeply about the suffering of AIDS victims, having visited thousands individually in the hospital.

Nice, caring people make superb functionaries for inhuman bureaucratic machines: they give a human face and voice to the whole enterprise, and so long as you keep suffering abstract and distant, they can run their pen over scores of ruined lives with a clear conscience. O’Connor was a kind man who responded humanely to the suffering that he saw; to what he couldn’t or wouldn’t see, he had no response at all. It simply didn’t cross his mind.

On my first read, I did wish that O’Loughlin had grappled more with the action and inaction of the hierarchy. That’s probably my own frustration coming to the surface, and a testament both to the effectiveness of the book’s presentation and to O’Loughlin’s disciplined refusal to abandon the concrete experiences of his subjects for easy polemic. The story of bishops’ misdeeds is the story of powerful men fucking up other people’s lives: that story has already been told. O’Loughlin would rather give us the daily struggles of ordinary people who tried to do some good, and who sometimes failed, and learned, and a few times really got it right. Those moments of grace, when transcendence breaks through and transforms the daily toil of mercy, illuminate why his subjects did this work: because the hungry needed to be fed, the sick cared for, the naked clothed, the dead buried. God seems to think that’s all very much worth doing, and O’Loughlin had the good sense to see that it was also worth writing down and remembering. I have to concede that he’s probably right. The virtues of ordinary people are often more interesting and more illuminating than the vices of the powerful, and I’m grateful that Hidden Mercy is unsparing about the costs, trials, and rewards of such virtue.