A controversial retired Catholic priest has penned a new book aimed at helping parishes that seek to reach out to homosexuals.

And it doesn’t focus on changing their orientation. 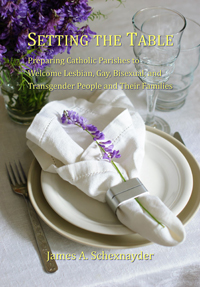 James Schexnayder’s book, Setting the Table: Preparing Catholic Parishes to Welcome Lesbian, Gay, Bisexual, and Transgender People and Their Families, is intended to serve as a resource guide for churches attempting to create “safe, supportive and healing places” for non-heterosexual individuals and their families, according to an article in the latest issue of Oakland’s the Catholic Voice.

“This book came out of my experiences not only locally, but in working with various diocesan clergy regarding welcoming gay and lesbian families into parishes,” Schexnayder told the Voice.

“There is nothing in it contrary to Church teaching.”

Schexnayder in 1994 was a co-founder of the National Association of Catholic Diocesan Lesbian and Gay Ministries, now known as the Catholic Association for Lesbian & Gay Ministry.

He’s been criticized in the past for advocating views insiders see as inconsistent with those of the church, such as suggesting that homosexuals are directed toward chastity, but not celibacy, in their sexual relations.

“Regarding sexual behavior, the Catholic Catechism… does not use the word ‘celibacy’ for gay and lesbian people; the word is ‘chastity,’” Schexnayder told an audience at Spring Valley’s Santa Sophia parish in 2002.

He says the issue is “about successful integration,” and that homosexuality can be a spiritual blessing.

At the same talk, he also touched on a controversial view of same-sex marriage, according to a report at California Catholic Daily.

“I don’t think the Church is going to deal with gay and lesbian marriages, but in its history and those who have done research on this, the Catholic Church and other Christian churches like the Orthodox church, have in fact in history blessed same-gender unions as spiritual bondings, and there are saints who have had very committed relationships.”