The Catholic Diocese of Green Bay says its First Amendment rights protect it from liability in a civil lawsuit filed by two childhood victims of clergy sex abuse. 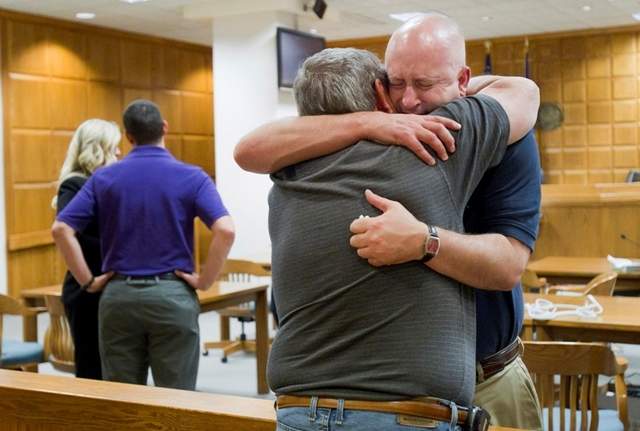 Brothers Todd and Troy Merryfield were awarded $700,000 in May by an Outagamie County Court that found the diocese committed civil fraud. The brothers claimed the diocese knew of the Rev. John Feeney’s illicit sexual history when it installed him as a priest at Freedom’s St. Nicholas Church and misrepresented him as safe while knowing he was a danger to children.

Sarah Fry Bruch, an attorney for the diocese, said the jury verdict should be overturned, arguing the court is constitutionally barred from reading any meaning into Feeney’s assignment to a pastoral role. The Merryfields didn’t show evidence the diocese represented Feeney as safe.

“Nor could they, as the assignment of a priest is a canonical act which the civil courts may not evaluate or explain,” she wrote. The First Amendment gives broad latitude to religious organizations in the conduct of their internal affairs.

Judge Nancy Krueger will hold a hearing Tuesday on motions filed by the diocese that seek a new trial, dismissal of the case, or overturning the jury’s findings.

John Peterson, an attorney for the Merryfields, disagreed in a written response, arguing the Merryfields’ claims against the church were secular. The diocese’s representation of Feeney as safe, by virtue of his unsupervised access to children, “has nothing to do with the Catholic Church’s religious beliefs.”

Granting the diocese immunity from Wisconsin law by finding in its favor “would raise grave Establishment Clause issues by actually advancing religion,” he wrote.

The Establishment Clause of the First Amendment prohibits the government from establishing a national religion or giving preference to one over another.

The First Amendment argument was one of several made by the diocese in a 40-page document asking for relief from the court.

One motion asks for a new trial, claiming bias on the part of a juror.

Another requests a dismissal, claiming the Merryfields unreasonably delayed filing the lawsuit and hamstrung the diocese’s ability to mount a defense. Several key witnesses died before the case reached trial.

The diocese also wants Krueger to rule the verdict excessive and change jury findings on the verdict form it returned.

Jurors awarded $475,000 to Troy Merryfield and $225,000 to Todd Merryfield. The brothers decided to not seek punitive damages after the diocese was found liable, saying the case was about revealing the truth, not money.

“A jury may have sympathy for the plaintiffs, but that alone cannot support a damage award,” Bruch wrote in arguing that evidence wasn’t sufficient.

Claims of juror bias arose after a member of the panel contacted the court about comments made by a fellow juror at the end of the case.

The juror mentioned to peers that a family member had attended St. Therese School in Appleton during the period Feeney was assigned to the church, and wondered aloud about the family member’s experiences with Feeney.

In addition, the juror was a friend of a cousin of the Merryfields’ mother, the diocese argues.

“One can only conclude that the juror purposefully kept back what she knew to get on the jury,” Bruch wrote.

Peterson said the juror’s recollections didn’t materialize until after the trial was under way, and she indicated so during an interview after concerns came forth.

The juror “did not exhibit any bias and stated that she could be fair and impartial,” he wrote.