Historically, a number of brave women have established themselves as a catalyst for change, dedicating their lives to a cause that becomes so compelling that they’re willing to risk everything they know to achieve their goal.

One such woman is Lexington resident and peace activist Janice Sevre-Duszynska. As a member of the Roman Catholic Women Priests, she and others like her relentlessly challenge the church’s dogma including their right to be ordained as priests. Her story and those of many other determined women have been featured in Pink Smoke Over the Vatican, a documentary that played at the Esquire Theatre earlier this month.

Although Sevre-Duszynska remains committed to her quest for reform, the bigger question remains: Will members of a church steeped in tradition and conservative values ever recognize women as priests? 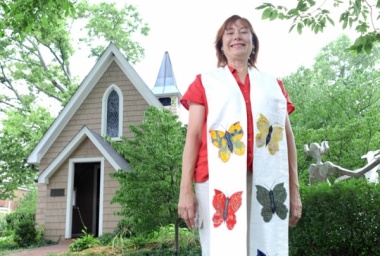 The calling to join the priesthood emerged around the time of her first communion, Sevre-Duszynska says. Growing up in a predominantly Polish-Catholic neighborhood in Milwaukee, she says at age 10 she was ask to help tidy the sanctuary (the part of the church where the altar is located). While cleaning, she says she lived her dream by pretending to celebrate mass as a priest.

Her ambitions almost drove her to step into the sanctuary as an ‘altar girl’ during a mass, a rite reserved only for young boys, but she stopped short fearing she would get her superior in trouble. Reading the gospels at a young age, Sevre-Duszynska realized Jesus also loved women and saw them as equals, not inferior members of the church. She pays homage to her mother for passing on the sense of liberation theology that caused her to question Catholic dogma and the role of women. After mass, Sevre-Duszynska’s mother would question the homily pointing out male priest’s disconnect to women lives as well as the real world.

Her desire lay dormant for many years until a series of events reshaped her life. In the 1980s, she and her family moved from Milwaukee to Lexington, Ky. A few years later, one of her two sons was killed in an automobile accident, and subsequently her marriage of nearly 25 years ended in divorce. Experiencing such devastating loss motivated her in more spiritual directions. In 1998, Sevre-Duszynska made national news when she interrupted an ordination ceremony at the Cathedral of Christ the King in Lexington.

“I walked up there and said, ‘I am called upon by the holy spirit to present myself for ordination — my name is Janice, I ask this for myself and all women,’ and I prostrated myself on the alter like a male candidates for priest,” she says. “So, I’m down on the ground and Bishop Williams says, ‘Get back to your seat you’re disrupting the service.’ Well, I always say it wasn’t disrupting it was interrupting.”

In 2000, Sevre-Duszynska garnered media attention yet again during a U.S. bishop’s conference in Washington, D.C., where she made a public announcement during the gathering calling for the ordination of women priests. After organizers silenced her microphone, she refused to leave the meeting until police escorted her out of the hotel.

Two years later, Sevre-Duszynska was arrested and charged with trespass after she refused to leave a diaconate ordination in Atlanta where she and several others protested sexism in the church. In 2001, she hung a banner in Rome during a bishop meeting that called for the ordination of women priests in eight languages.

“I was known as the sign lady and the banner lady and I headed up the ministry of irritation,” she says.

Her journey began to see fruition in 2006, when she was ordained a deacon of the church by the order of Roman Catholic Women Priests in Pittsburgh. She continued her preparation by studying theology at Lexington Theological Seminary working toward her doctorate, adding to her master’s degree in theater from the University of Kentucky.

In 2008, Sevre-Duszynska was ordained a “womanpriest” by the order at the Unitarian Universalist Church in Lexington. With more than 150 people in attendance, she celebrated the joyous event with family, friends, fellow peace activists and supporters of the women’s ordination movement including three male priests in good standing.

The Rev. Roy Bourgeois delivered the homily, an act that would have lasting repercussions. After sending invitations to a number of male priests, Bourgeois called to tell her he would be proud to attend and deliver the homily.

The two met as peace activists in their shared quest to close the U.S. Army School of the Americas at Fort Benning, Ga. — an organization accused of training paramilitary assassins for militant groups in South America. During a 2001 protest, Sevre-Duszynska crossed into the base, resulting in a sentence of three months in federal prison.

The School of the Americas, recently renamed the Western Hemisphere Institute for Security Cooperation (WHINSEC) is believed to be responsible for several deaths in El Salvador including those of Catholic priest and activist Oscar Romero, six Jesuit priests and four Catholic nuns, two of whom were members of the Maryknoll order. As a Catholic priest in the order of the Maryknolls, a division of the Catholic Church that helps poor and repressed people overseas, Bourgeois was friends with the two women.

“For the next year, I was full-time building a movement calling for the closing of School of the Americas and the training of all of these soldiers coming from El Salvador and all of these other countries, all paid for by our tax money,” Bourgeois says. “I was zigzagging all over the country talking about this injustice in El Salvador and the injustice in the school of the Americas and then I discovered an injustice much closer to home in my church.”

With a sincere ring in his voice, Bourgeois recalls how he wrestled with his conscience over his own beliefs. While away on missions, he met a number of women like Janice who received a calling from God to be priests. Until then, he never really questioned church tradition, but tells how he was unable to reconcile one question that continued to haunt him.

“As Catholics, we do profess that God created men and women of equal dignity — and as Catholic priests, we always say the call to be a priest comes from God,” he says. “So I began to ask a very important and basic question, ‘Who are we as man to reject God’s call of women? How can we as men say that our call from God is authentic but God’s call of women is not?’ ”

After returning home from Sevre-Duszynska’s ordination ceremony, Bourgeois received a call from Maryknoll headquarters requesting a meeting with the superior general and general council in order to explain his actions. Two months later, he received ‘the letter’ from the Vatican stating he had 30 days to recant his belief and public statements for the ordination of women or be excommunicated from the church.

During his visit to headquarters, Bourgeois says he posed the question to the Maryknoll council and other priests in the church; their response, he says, was silence. After crafting a lengthy and passionate letter to the Vatican, Bourgeois says he received the no response or even acknowledgment of its receipt.

By ultimately following his conscience, Bourgeois says he refused and continues to refuse to remain silent about the issue and gives talks around the country in support of ordaining women priests. As a result, two months ago — a little more than two years since he attended Sevre-Duszynska’s ordination — Bourgeois received another summons to Maryknoll headquarters in New York. Superiors ordered him to recant his statement within 15 days or receive expulsion from the Maryknolls, his family and community for more than 39 years.

Bourgeois says he visits the mailbox every day expecting the final letter. He likes to joke that his chances of winning the Georgia State Lottery are better than his chances of being allowed to remain in the order.

But a small glimmer of hope arrived recently in a copy of a letter sent to the Vatican. Bourgeois says it was signed by more than 100 priests in good standing supporting his position to honor his conscience. Bourgeois believes hope lies in sheer numbers, with more and more people in the church coming forward in support. Many of them have supported female ordination for some time but are afraid to come forward because of harsh repercussions. He particularly questions the church’s stand on excommunication for supporters of women priests in relation to some other scandals that rocked the church.

“How many priests has the Vatican kicked out or excommunicated for their crimes against children?” he says. “There’s none — not a single one. They have not excommunicated them or the bishops who have covered up the crimes. That continues to be a big issue in the Catholic Church.”

To date, the Roman Catholic Women Priests movement boasts 120 female priests with branches in in Eastern and Western Europe, Eastern and Western Canada and the United States, says womanpriest Bridget Mary Meehan. In addition, Meehan says she recently ordained the first woman in South America expanding the order to yet another continent. She explains the grassroots movement continues to play by church rules, a measure necessary to gain credibility.

She says of the seven womenpriests originally ordained on the Danube in 2002, two were later ordained secretly by a male bishop in good standing. As part of apostolic succession in the Catholic religion, the church only recognizes priests ordained by chosen bishops in good standing; an act that was completed under the veil of secrecy, but carried out nonetheless, Meehan says.

“That means they recognize apostolic succession and a male bishop would need to ordain us,” Meehan says. “We got that, and that’s the part that they hate. They take the movement seriously and they’ve done everything they could to punish us because they see it as a direct threat to the all-male, patriarchal dominant model. It’s a threat to the male authority power structure of the church.”

The movement includes more reforms than simply ordaining women, Meehan adds. The grassroots movement looks to reinvent the church into a more egalitarian, circular model where all members participate and feel empowered.

The group believes the Catholic Church in its current state bears little resemblance to the vision of Jesus. She tells of how in all four gospels, Jesus appears after his resurrection to Mary Magdelene, who is still widely believed to be the apostle to the apostles. When traditionalists question her right to be a priest, she counters with historic evidence of women priests in the church more than 1,200 years ago.

“Women priests are reclaiming our ancient tradition of women in ordained ministry,” Meehan says. “People who are guardians of the tradition and traditionalist Catholics should celebrate that women are taking their rightful place following the example of Jesus, who had male and female disciples — all they have to do is read the gospels.”

Pink Smoke Over the Vatican, the award-winning documentary directed by Jules Hart, follows the lives of several women, including Sevre-Duszynska, and their quest for ordination.

With all the adversity these women face in the Catholic Church, the question arises why don’t women like Meehan and Sevre-Duszynska simply embrace another faith that ordains women as church leaders — why fight the fight?

For Sevre-Duszynska, she simply professes Catholicism to be her religion since birth and her religion of choice. Other churches have approached her, but she still feels connected to her roots. She says while reform needs to occur within the church, she can’t help but love the institution based on the gospels and filled with patron saints that has always been a part of her life.

“Why should I leave the richness and all of my experiences in the church that I worked to and was called upon to speak out and challenge it?” she asks. “I feel like a daughter of the church, why would I want to leave it?”