Negotiations on delivering a package of care for English and Welsh victims of sexual abuse by Roman Catholic priests are on the verge of collapse after survivor organisations accused the church of using the discussions as a smokescreen for inaction. 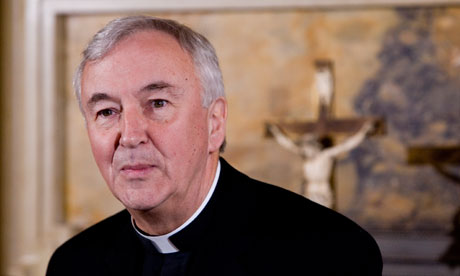 Two groups have pulled out of discussions led by the National Catholic Safeguarding Commission (NCSC) and the Catholic Safeguarding Advisory Service (CSAS), describing them as shambolic, toothless and unlikely to achieve anything by May 2012, when the pope’s deadline for a progress report expires.

Graham Wilmer, who heads the Lantern Project and was himself abused by a Catholic priest as a teenager, said: “We were prepared to talk to [the institution] that had harmed us, even though it was uncomfortable, because the end of it should be worthwhile,” he said. “[But] we can’t trust them. What has effectively has happened is nothing.”

Wilmer said the talks were meant to create “a comprehensive support package” for victims of sexual abuse by clergy but there was still no system in place for a victim to request support by telephone and that calls were answered by lawyers for the church’s insurance company.

Archbishop Vincent Nichols, the head of the Roman Catholic church in England and Wales, declined to meet Wilmer or the forum before the two groups walked out.

Wilmer said another aggravating factor for his organisation was that the church had continued to oppose victims seeking compensation over the past year.

He said: “There certainly is the intention to deliver what looks like an attempt to produce a better response to victims of abuse, but when you test it, you just end up with a bunch of lawyers … they [the Catholic church] are not prepared to deal with the victims of its abuse in any way other than to fight them through the courts.”

Dr Margaret Kennedy, founder of Minister and Clergy Sexual Abuse Survivors (Macsas), has also pulled out of the talks, describing them as “a complete shambles”. She said: “Macsas has always been very uncomfortable with this particular group, partly because it started off with no aims and objectives and no money on the table… to put [recommendations] into place.”

She said church representatives “were continually refusing to even mention clergy abuse” in the meetings, preferring to widen out their remit to all survivors of abuse in society.

“We said: ‘Isn’t your first response to the victims of clergy abuse whom your priests have raped and tortured?’ … And they didn’t want to talk about that. ‘You’re not the only victims of abuse’ was the message we basically got,” she said.

Kennedy said that one of the group’s purported aims, to “reconcile” victims of abuse to the church, had angered her.

“They have this great idea that they are going to heal victims that they have actually harmed in the first place. They haven’t a clue of how victims of clergy abuse feel,” she said.

Pete Saunders, from the National Association for People Abused in Childhood, said his organisation and three others were sticking with the talks because there was still a “chink of light”.

Saunders, who was sexually abused by two Catholic priests as a child and believes there are “thousands and thousands” of UK victims like him, said confidential proposals on survivor treatment were now going to be put before the Catholic bishops’ conference in mid-November and this represented a make-or-break point.

He said: “We are aware that the Catholic church have got a lot to answer for in terms of the way that they protect abusing priests and nuns. They have an appalling record on that and the colleagues around the table, including the Catholic Safeguarding Advisory Service, have all agreed that.”

But Saunders said the church’s senior clergy were “now going to have it laid on the line”. In November, they would be told to “stop making life difficult for survivors and challenging very legitimate claims from people who want to get on with their life and want some degree of justice”, he said.

“If the bishops’ conference closes down that chink of light, then we will certainly walk away because it will mean there is no sincerity,” he said.

A church spokesperson told the Guardian that, when it came to compensation claims, the church’s hands were tied by charity commission rules that stopped it handing out money without first being lawfully entitled to do so. It is also a requirement for the church to be insured against indemnity and the spokesperson said it could not be responsible for the actions of the insurance company when it came to compensation claims.

Adrian Child, the director of CSAS, said: “The NCSC and CSAS have been in dialogue with representatives of a number of survivors’ support organisations and others for the past 12-plus months. The aim is to develop a sensitive and just response to survivors of abuse within a church setting in order to promote healing for victims of abuse.

“Regret was expressed by the group that they [Macsas] had made that decision, but the decision was respected and they were thanked for their contribution to the work so far.”