Amnesty International has called for an independent inquiry into clerical child sex abuse in Northern Ireland after internal Catholic Church reports found the clergy guilty of inaction over paedophile priests. 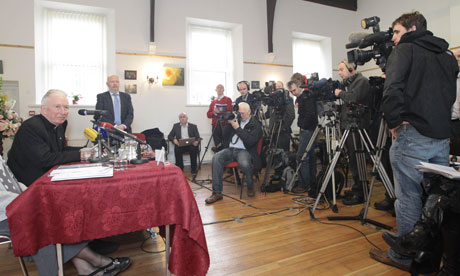 An inquiry in Derry found that allegations were not robustly challenged or adequately managed, and that priests who were moved out of parishes in the diocese continued to abuse elsewhere.

Monsignor Eamon Martin, acting as the administrator of the Derry diocese following the retirement of Bishop Dr Seamus Hegarty, acknowledged it was “disturbing” that the diocese seemed more interested in protecting the church than the children. He said the victims had been “violated, their self-esteem and self-belief battered, and their spirit crushed.”

In the neighbouring Raphoe parish just over the border in Co Donegal, a report revealed that there were 52 complaints of child abuse against 14 priests. More than 20 of the offences were committed by one priest, Fr Eugene Green. In Raphoe it was found that the practice of failing to report allegations of abuse went on for 36 years.

The current Bishop of Raphoe, Phillip Boyce, accepted that in his diocese “insufficient emphasis was placed on the needs of victims, often in the misguided attempt to protect the reputation of the Church.”

One of the main whistleblowers who brought the abuse to light in Raphoe was a Garda Síochána officer Martin Ridge who claims the church hierarchy repeatedly ignored the claims of victims.

The pattern of reports of abuse being ignored or priests suspected of abusing children being moved out of dioceses, even to other parts of the world, is replicated throughout the six reports, that include Tuam in the west of Ireland and Dromore in Northern Ireland which takes in the border region around Newry.

Reacting to the reports by the National Board for Safeguarding Children in the Catholic Church, Amnesty International said the findings were “barely a glimpse into the horror of abuse suffered by children in both Northern Ireland and the Republic of Ireland.”

Backing calls for an inquiry, Amnesty’s programme director in Northern Ireland, Patrick Corrigan, said: “Clerical abuse survivors in Northern Ireland have been in touch with Amnesty and have told us they wish to see a proper, independent public inquiry into clerical child abuse in this jurisdiction. Survivors of clerical abuse in the Republic of Ireland have seen the state institute inquiries into the dioceses of Dublin, Ferns and Cloyne and have seen the Taoiseach speak out on behalf of victims. In Northern Ireland, to date, there has been no such examination. ”

“The Northern Ireland Executive has an obligation to ensure a thorough investigation of child abuse within this jurisdiction, regardless of when that abuse took place and regardless of the occupation of the alleged abuser,” Corrigan said.