THE Roman Catholic Church is preventing a seven-year-old boy with Down’s Syndrome from taking his first Holy Communion. 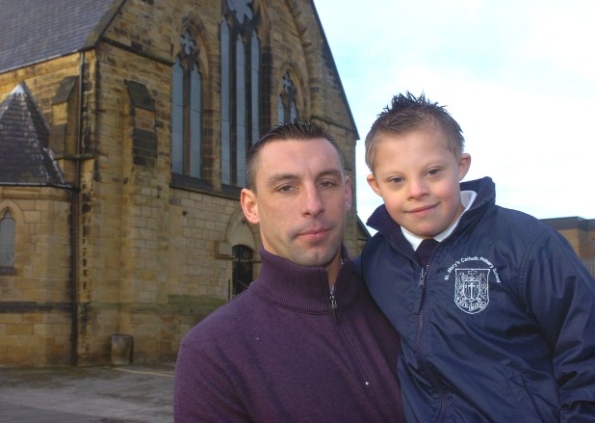 Little Denum Ellarby goes to church, knows who Jesus is and is old enough to take part in the special ceremony.

But he will not be joining children of his age at Holy Communion preparation classes or on the big day itself at St Mary’s Church in Batley.

The diocese has written to Denum’s parents saying their son is not yet ready as he has ‘limited concentration’ and does not enjoy Mass.

His parents have now accused the Catholic Church of discriminating against him because of his disability.

Mum Clare, of Crown Flatt Way, Dewsbury, said: “I feel really let down by the Catholic faith. If I don’t stick up for him, no-one will.”

Seven-year-old Denum is a pupil at St Mary’s Catholic Primary School in Batley.

The Reporter Series understands that at the age of about seven, pupils from St Mary’s School are invited to take First Communion classes at St Mary’s Church.

But Mrs Ellarby said she never received an invite and by the time her family heard about the classes they had missed the first meeting.

Parish priest Fr Mungovin declined to comment about Denum, as did St Mary’s School and the Vicar General.

“We hope that this will change as Denum grows and we are working with him and his family to help him achieve this.”

Xanthe Breen, of the Down’s Syndrome Association, has been speaking to the family about their concerns.

She said: “It’s not something we have ever heard of before. It’s a shame all parties can’t come to a compromise.”