A newly installed Roman Catholic priest has been removed from his suburban New York parish after church officials on Thursday said he secretly fathered a child while attending seminary. 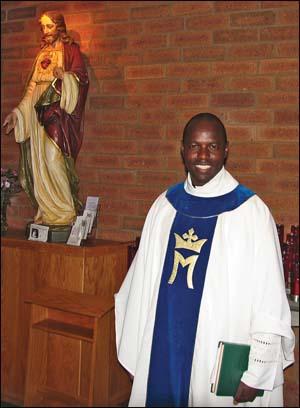 The removal of Reverend Casmir Mung’aho, 34, from his post at St. Stephen the First Martyr Church in the Orange County town of Warwick, New York, comes two weeks after the resignation of a Los Angeles assistant bishop who admitted he had two children.

Mung’aho was asked to step down after officials learned he fathered a child in a consensual relationship with an adult woman during his first year of seminary school, Bishop Dominick Lagonegro said in a statement.

While Mung’aho was removed from the congregation in Warwick, it was not yet clear whether he will remain a priest or be defrocked by the New York Archdiocese, said archdiocese spokesman Joseph Zwilling. He said officials had yet to discuss with Mung’aho what action will be taken.

“Father never revealed this to our bishops or seminary authorities, which he certainly should have done,” Lagonegro said in a statement.

“Given the need for Father Casmir to address this matter and reflect on his responsibilities in a very serious way, his assignment to St. Stephen’s is now ended. Please pray for him, as well as for the mother and the child whose lives are so precious.”

The Catholic Church requires celibacy from its priests.

When asked how the church found out about the young child, the Rev. Michael McLoughlin, St. Stephen’s pastor, declined to elaborate to Reuters.

“We’re all sad and we’re all praying for him,” McLoughlin said. “Everything is out there now and other than that I have nothing to say.”

Attempts to reach Mung’aho were not immediately successful. According to his biography published in the New York archdiocese’s official newspaper last year, he grew up in Tanzania and came to the United States about six years ago. As a child, he had always dreamed of becoming a priest.

“The support and respect for the church in general is very high,” he said in his biography. “I see myself here being a model. It’s being an example every day.”

Earlier this month, Gabino Zavala, an assistant bishop of the Roman Catholic archdiocese of Los Angeles, resigned after admitting he had a secret family and the two teenage children he fathered were living with their mother in another state.