The last five months have been eventful for Steav Bates-Congdon. 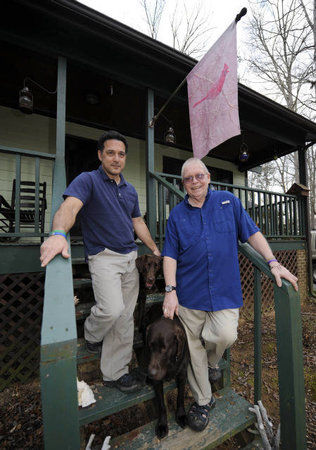 First he got married. Then he got fired.

The popular music director at St. Gabriel Catholic Church in south Charlotte lost his job last month for marrying his longtime partner in New York, one of seven states to recognize same-sex marriages.

Under a recent Supreme Court ruling, the firing appears legal.

North Carolina doesn’t recognize same-sex unions. Voters will decide in May whether to add a constitutional ban.

The Catholic Church considers homosexual behavior a sin, and Bishop Peter Jugis, who heads the Diocese of Charlotte and is the spiritual leader of Catholics in a 46-county area, has been a strong supporter of legally restricting marriage to a man and a woman.

With some 10,000 members, St. Gabriel is one of the largest Catholic congregations in the state. Bates-Congdon, 61, a former Methodist minister and now an Episcopalian, joined the staff in 2004. Parishioners say he’s been open about his sexual orientation since his first job interviews. Bill Bates-Congdon, his partner of 23 years, soon became a familiar figure around the music program and eventually joined the hand-bell choir.

On Oct. 15, with several St. Gabriel members on hand, the pair said vows at a state park on the shore of Lake Ontario in upstate New York. Then Steav Bates-Congdon returned to work.

On Jan. 19, just back from a honeymoon trip to Mexico, followed by an emergency stay at Carolinas Medical Center for a ruptured appendix, he checked out of the hospital and dropped by St. Gabriel. There, he was handed a note by the Rev. Frank O’Rourke, the pastor with whom he had closely worked for more than four years.

It read: “Employees of St. Gabriel … are expected to live within the moral tradition of the Church…Your civil marriage stands in direct opposition to the teaching of the Catholic Church, therefore ending your employment with us, effective today.”

Jugis was not available for comment. But in response to a list of Observer questions, Hains wrote:

“Mr. Congdon’s ‘civil union,’ is a public statement in direct opposition to the teaching of the Catholic Church on marriage as a lifelong, exclusive covenant between one man and one woman.”

Bates-Congdon, who has produced music for Catholic churches for some 30 years, says he told O’Rourke about his wedding plans within days of his June proposal to Bill “because I didn’t want him blindsided.”

Congratulations, I’m very happy for you. But I can’t give you my blessing.

“I wouldn’t ask you to,” Bates-Congdon says he replied.

More than six months passed before he was fired.

Now, Bates-Congdon wonders why his boss and friend didn’t warn him of any problems, “why (he) didn’t pull me aside and say, ‘Dude, this is a really bad idea.’ ”

Had O’Rourke raised any concerns, Bates-Congdon says, “Bill and I would have pulled the plug and postponed it until some time when it wouldn’t have mattered, like in retirement.

“This was never about activism or forcing the church to make a stand – or even Bill and me making a stand. It was for the sheer joy of celebrating the fact that we could get married that we decided we would.”

Some St. Gabriel members, particularly those in the music program, have been left saddened and angered by the move.

Bates-Congdon, they say, expanded and significantly improved the music ministry, while never flaunting his sexual orientation or his relationship.

Bill Collins, a longtime choir member, says his family has left the parish over the firing and may go outside the diocese to find a new church.

“I need a community that’s compassionate beyond its rules,” he says. “I need a leadership with compassion, not a leadership that simply talks about it, then acts otherwise.”

Cate Stadelman, a church member and choir singer for almost 25 years, says she has been back to St. Gabe’s once since Bates-Congdon’s firing – to help him pack. She doesn’t know whether she’ll return.

“It’s the injustice of it,” says Stadelman, who was on the search committee that recommended Bates-Congdon and, with her husband Tom, was a member of his wedding party.

“And then there’s the fact that this has absolutely no bearing on his ability to do a fabulous job.”

Brett Denton, a member of the parish council, calls Bates-Congdon’s departure regrettable, but says the decision by the religious leaders was made “carefully, thoughtfully and prayerfully.”

“It was something that was necessary because (the marriage) was opposite to the teachings of the church,” he says, “and that led to a parting of the ways.”

Under the court’s decision, churches receive “a ministerial exception” that protects them from government say on whom they hire for their spiritual missions. A lower court ruling in 2000 involving a Catholic church in Raleigh said music directors are part of a church’s ministerial staff because music is an integral part of worship.

Hains says the timing between the ruling and the firing is coincidental.

He added that the decision also had nothing to do with Jugis’ support for the proposed marriage amendment. The bishop played a role in the personnel matter – just what is unclear.

Asked if Jugis had ordered the firing, Hains said: “Employment decisions for parish-based employees are made in the parishes.”

It’s not known if the diocese has made similar moves using the same grounds. In 2010, a lesbian who taught theology for 28 years at a Denver Catholic church was fired after she placed an ad on Match.com.

Hains says church employees here are not screened for sexual orientation, nor do churches delve into private relationships. Bates-Congdon’s case, he says, involved a “public declaration” contrary to church teachings.

In taking the job at St. Gabriel, Hains says, Bates-Congdon agreed to abide by the diocese’s “Principles of Ethics and Integrity.” It states that employees “must respect, appreciate, and uphold the teachings, principles, legislation, policies and traditions of the Roman Catholic Church in both word and example.”

Asked why so much time passed between the wedding and the firing, Hains said: “Decisions such as this one are not made in haste, and the parish wanted to take the time to consider what the appropriate action should be.”

“It is interesting that it was all right for him to ‘live in sin,’ ” he says. “But when he got married it became a firing offense.”

St. Gabriel will continue to pay his $60,000 salary and insurance premiums through June. Bates-Congdon, who was diagnosed with Parkinson’s disease 15 years ago, faces surgery for the problem that hospitalized him last month.

Then he hopes to find another job.

He proposed to Bill in June, moments after the New York legislature approved that state’s same-sex marriage law. He was watching the vote live on his computer, in the backyard of their Waxhaw home. He popped the question on Facebook. Bill, 47, asleep on the couch, didn’t respond. The next morning, Steav walked into the bathroom. There on the mirror was written the word, “Yes.” It’s still there today.

They decided to marry after all this time together because they wanted their relationship, Steav says, “tied up in a bundle that was both legal and sacred.”

He says O’Rourke was one of the best bosses he ever had, and while he still doesn’t understand the timing of his firing, he appreciates that the priest “told me why.”

“When you have years of sexual scandals in the Catholic clergy and nothing is addressed, everything is left to rumor and speculation. Father Frank, whether intentionally or not, spelled it out.”

Only once, he says, did his sexual orientation become a parish issue. It occurred in 2006, after Bates-Congdon started a youth choir, which was a goal of his job description. A parish member wrote to then-pastor Ed Sheridan expressing discomfort that Bates-Congdon was leading the youth group while also serving as artistic director of the city’s One Voice Chorus, made up of gay and lesbian vocalists.

Reached last week, the parishioner asked that his name not be used, and said he didn’t approve having the children under Bates-Congdon’s tutelage. He said he also felt the director’s role with the gay chorus put the church in an inappropriate position. He declined to speak about the firing.

In 2006, Sheridan wrote back that his music director had already arranged to have a female assistant present during all youth practices. The priest went on:

“Your note implies the concern of whether Steav is gay or not. As you know there is a question on this issue in the church, whether it impacts priests, lay people etc. I know that we do not judge individuals and we do not have adequate information to make any judgment.”

Afterward, however, the priest asked Bates-Congdon to end his affiliation with One Voice, which he did.

Collins, the choir member, says the director’s sexual orientation made some music program members uncomfortable. “Certainly, it didn’t bother them enough to not participate because they loved the music, and their appreciation of his leadership and talent overcame any discomfort.”

On Wednesday, O’Rourke sent an email to choir members inviting them to the church this Thursday night for “dinner and discussion.”

“I hope this ministry will continue to nourish our parish,” he wrote. He did not mention Bates-Congdon.

Friday afternoon, for the first time, St. Gabriel’s full congregation received fuller details about the firing of their music director and organist.

O’Rourke sent out another email, alerting parishioners to the Observer’s story. It included a memo by Hains, which detailed the reasons Bates-Congdon was let go.

“This may be a challenging time for our parish,” O’Rourke said. “As Catholics we are called to prayer in situations like this, prayer for all individuals involved, for ourselves and for our community. Join me in praying, ‘Lord, make us instruments of peace.’ ”