The battle in this country between the right and the left is raging. Since the right has no answers to the economic questions we face, they’ve decided to concentrate on dividing the country on so-called “moral” issues, one of those being the demonizing of gay and lesbian people. Little by little, they are losing the battle, as we see states individually legalizing gay marriage and recognizing that our forefathers intended that ALL are created equal and marriage is an equal right. But that doesn’t stop the right from carrying on their battle. 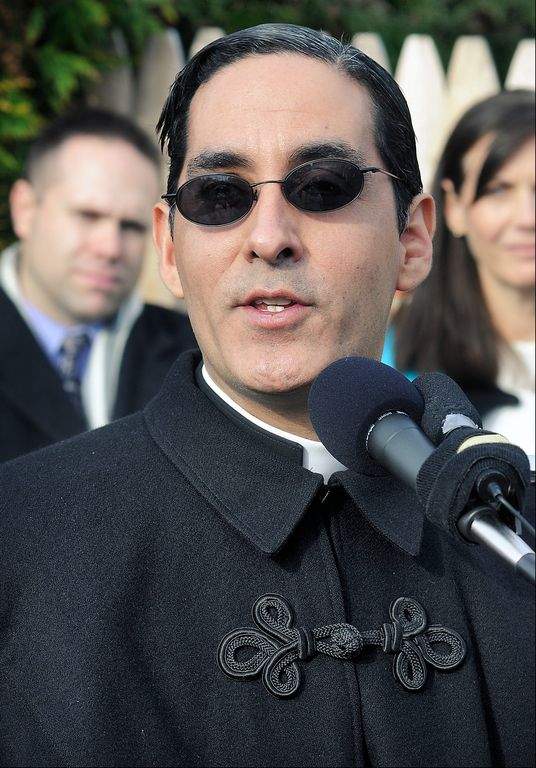 Something terrible happened this past weekend in Maryland and the fact that it was Maryland, a state that has just proclaimed that all are equal and has enshrined that concept into state law, goes to highlight the lengths to which the right will go. In this instance, the right was personified by Father Marcel Guarnizo, who officiated at the funeral of a former family member of mine. She was no longer a family member because I divorced the man who was her blood relative. But with social media these days, a person can remain in touch with those who, although there is no longer a family connection, are still people who are valued.

My friend Barbara, the daughter of the deceased woman, was denied communion at her mother’s funeral. She was the first in line and Fr. Guarnizo covered the bowl containing the host and said to her, “I cannot give you communion because you live with a woman and that is a sin according to the church.” To add insult to injury, Fr. Guarnizo left the altar when she delivered her eulogy to her mother. When the funeral was finished he informed the funeral director that he could not go to the gravesite to deliver the final blessing because he was sick.

I will tell you a little about the woman who drove that priest from the altar. She is kind, she is smart, she is funny and she works hard promoting the arts. She pays her bills, she cares deeply for her family and she loved her mother and her mother loved her right back. And now she will never set foot in a Catholic church again and who can blame her?

It is time for Christians of all stripes to stop and think about the teachings of the Jesus they proclaim to love so deeply and revere so much. I spent twelve years in Catholic school and the Jesus I was told about would never have turned away anyone for any reason and certainly not on the occasion of burying a parent. Fr. Guarnizo has a lot to learn about Christianity and the Catholic Church has a lot to learn about the teachings of Jesus if behavior of this sort is tolerated.

I am not about to paint all Christians with a broad brush. There are those out there who understand that the teachings of Jesus boil down to one thing. And that thing is Love. For if you love, you do not deny a person the solace of communion with the Creator, if that is their belief. You judge not, lest ye be judged. Only God knows the true heart of any person and in the end, if there is to be judgment, it will not come from some misguided, prejudiced priest who needs to go back to the seminary and learn the basics. And if he can’t find them there, then he needs to get down on his knees and pray to his Jesus to forgive him the terrible trespass he visited upon a grieving woman on the occasion of the death of her mother.

This is but one small story but it is indicative of the battle raging in America today. It is an ugly battle and one I never thought I would see. But it is here and we must deal with it. We must keep politics out of religion and religion out of politics. Perhaps if we can get back to a place where the separation of church and state are once again accepted as one of the founding principles of this country, stop trying to out-Christian each other, stop vilifying other religions and other people based on purely human and not godly concepts, we will begin to mend the fractures that are tearing us apart today. To do that, the Father Guarnizos and the Rick Santorums of the world will have to undergo a radical change of heart and I don’t think they have it in them. So it is up to the rest of us.

As for me, I send my love and condolences to my friend Barbara and all of the other family members who were made to witness such an egregious display of prejudice in such an inappropriate setting. To Father Guarnizo, I say, “Jesus would weep.”