Pope Benedict XVI arrives in Mexico this week to a very public reminder of one of the Catholic Church’s most egregious sex abuse scandals: A new book says internal Vatican documents show the Holy See knew decades ago of allegations that the Mexican founder of the disgraced Legion of Christ religious order was a drug addict and pedophile. 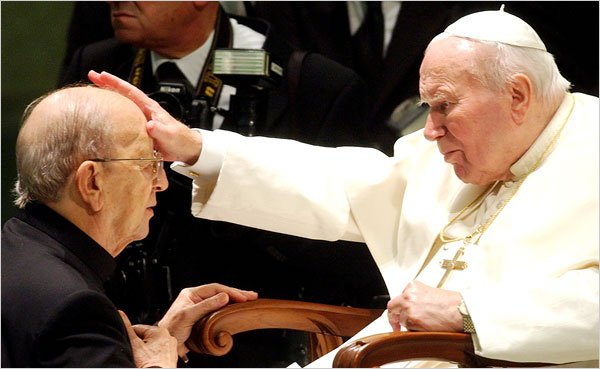 The documentation has been compiled in a book “La voluntad de no saber” (“The will to not know”), which is co-authored by Jose Barba, a former Legion priest who along with other priests in 1998 brought a church trial against the Legion’s founder, the Rev. Marciel Maciel, for having sexually abused them while they were seminarians.

While details of the abuse were made public years ago in Mexico and the Spanish-speaking world, the authors aim for a larger international audience, saying they will post key documents on the Internet as part of the book release Saturday. Excerpts of the book published by Proceso magazine on Sunday received little attention in Mexico.

“The importance of this book is that it documents the irrefutable evidence and proof that the Vatican has been lying about Maciel,” said Bernardo Barranco, an expert from the Religious Studies Center of Mexico and author of the prologue of the new text.

The Rev. Richard Gill, a prominent U.S. Legion priest until he left the congregation in 2010 after 29 years, said the documents’ publication could be tumultuous for the order as the Vatican tries to steer it through a process of reform.

“The revelation of these documents, previously unknown to the great majority of Legionaries who acted in good faith, shows that there were solid grounds for the removal of Fr. Maciel more than 50 years ago,” Gill said in an email, calling anew for the Vatican to further investigate how Maciel could have hidden his behavior from public view for so long.

The question of the Vatican’s handling of Maciel and his victims has grown in the lead-up to Benedict’s arrival Friday in Mexico amid speculation that the pope might meet with some of the victims. During foreign trips to the United States, Australia, Britain, Malta and Germany, Benedict has heard firsthand the stories of sexual abuse from victims and prayed with them.

But the Vatican has said no such meeting is planned. Barba and other victims say they wouldn’t meet with Benedict anyway because of his role in the Maciel affair. 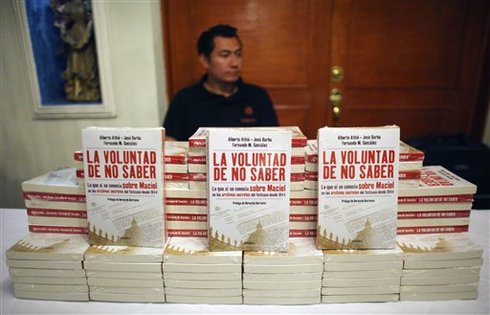 their complaint in 1998, but it took the Vatican eight years to sanction Maciel for the crimes — during which time the accusers were branded as liars and discredited by the Legion.

Maciel, meanwhile, continued to enjoy Pope John Paul II’s highest regard as the founder of one of the world’s fastest-growing religious orders, able to attract money and vocations to the church despite the mounting accusations against him. John Paul admired the Legion’s orthodoxy and discipline — qualities which set it apart from many other religious orders and made it attractive to many of Mexico’s political and financial elite who sent their children to the Legion’s schools and seminaries.

Benedict took over the Legion in 2010 after the order finally admitted Maciel had molested seminarians and fathered three children with two women. A Vatican investigation determined Maciel, who died in 2008, was a religious fraud who had built an order based on silence and obedience that allowed his double life to go unchecked.

Benedict’s envoy is now trying to reform the order amid charges from former members that they were spiritually and emotionally abused by Maciel’s rigid rules, the cult-like life he created and the religious vows they took preventing them from criticizing their superiors.

In an interview with The Associated Press, Barba said the book was based on information from some 212 documents in a Vatican archive that he said he had obtained from unnamed church officials.

The documentation, he said, demonstrates that the Vatican had information against Maciel as early as 1944 and particularly in the mid-1950s, when the Holy See launched its first investigation into the Mexican-born Maciel. The so-called apostolic visitation lasted from 1956 to 1958, during which time Maciel was suspended as the Legion’s superior, though he was subsequently reinstalled.

The documents “show with complete clarity that the Vatican knew the true nature of this man, the accusations, the opinion of experts, the revision of other experts on top of previous experts, and the opinions that the apostolic visitors gave,” Barba said.

Over the years, damaging documentation has filtered out largely in the Spanish-speaking world showing that Legionary higher-ups and some Mexican bishops were well aware of Maciel’s drug abuse and sexual predilections, and that at least the Vatican’s office responsible for religious orders had been alerted to the problems as early as 1956.

The Catholic blogger Cassandra Jones, for example, has cited letters sent in 1956 from the bishops of Cuernavaca, Mexico, and Mexico City to the Vatican’s office for religious orders recommending Maciel’s removal and a Vatican investigation into what Cuernavaca’s then-bishop Sergio Mendez Arceo termed, “devious and lying behavior, use of narcotic drugs, acts of sodomy with boys of the congregation.”

But “La Voluntad de no saber,” which comes out on Benedict’s first full day in Mexico, promises to compile more complete documentation from the Vatican’s own archives about Maciel’s sins. Critically, since the book is only being published in Spanish in Mexico with an initial run of 6,000 copies, the documentation will be scanned and available at a special website http://www.lavoluntaddenosaber.com, organizers said.

An excerpt of the book was published over the weekend in the Mexican weekly Proceso detailing Maciel’s addiction to morphine, citing a 1954 letter by a Legion priest to the Mexico City vicar that was found in the archives of the congregation for religious orders.

The book also reproduces the 1976 letter by another Maciel victim, Juan Jose Vaca, to Maciel denouncing the years of abuse he suffered, starting when he was a 13-year-old seminarian.

The letter, which has been reproduced elsewhere in the past, is chilling reading: “For me, Father, the disgrace and moral torture of my life began that night in December, 1949,” Vaca wrote. “With the excuse of your pain, you ordered me to stay in your bed.”

Vaca named 20 other Legion and ex-Legion priests who had suffered similar abuse over the years, providing damning accusations that his diocesan bishop in Rockville Center, New York, forwarded simultaneously onto the Vatican, Vaca said.

Benedict himself has acknowledged Maciel was a “false prophet” but has insisted that he only learned the true nature of the allegations against Maciel in 2000. His office received Barba’s complaint in 1998 and the Vatican’s office for religious the Mexican bishops’ charges in 1956. But with the Vatican’s very decentralized fiefdoms, it’s not surprising that accusations that may have landed in one official’s hands were never forwarded on, especially given the sensational nature of the accusations and the esteem that Maciel enjoyed in Rome.

“Where these meetings have taken place, it was in a context in which the bishops asked the pope to do it because it was a problem felt in society and the church, and that it was something desired,” Lombardi told reporters. “In this case, it’s not on the program, so don’t wait for it.”

For their part, Barba and other victims have said they would never agree to a meeting with Benedict since it was his old office — the Congregation for the Doctrine of the Faith — that had received their case in 1998 and sat on it for eight years while they suffered the Legion’s defamation campaign to discredit them.

“For nothing in the world would I ever meet with someone who protected Maciel when he should have been punished,” said Jose Antonio Perez Olvera, a former Legionary who was sexually abused by Maciel. “We don’t make deals with criminals, nor with those who were their protectors and accomplices.”

However, other former Legionaires said a meeting might have helped heal those who have been hurt by Maciel.

“It could have been a beautiful thing,” said Patricio Cerda, a former Legion priest who heads a Spain-based association of the order’s victims. “Because they obviously are men of a certain age, and will leave this world with this bitterness in their souls.”

But he acknowledged the wounds of Maciel’s original victims run deep: “They were denied the truth of their lives,” he said.