The Rev. Gerald Riva has resigned as pastor of St. Scholastica Catholic Church in Woodridge, days after his nearly 20-year-old sex crime conviction came to light. 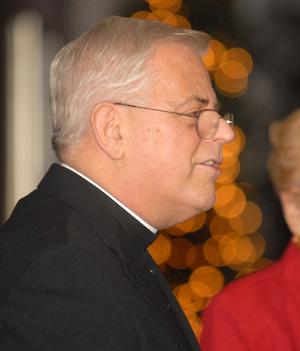 Riva resigned from the parish this weekend, and did not perform Sunday Mass at the church, said Doug Delaney, a spokesman for the Diocese of Joliet, which administers the church.

Riva, 70, who has been a priest for almost 45 years, resigned on his own accord, and was not forced to do so, according to the diocese.

“He did not even say Mass on Sunday, as he was to ashamed to do so,” Delaney said.

In 1992, Riva pleaded guilty to the charge of public indecency. According to police records, Riva masturbated in front of a DuPage County Forest Preserve officer in a forest preserve in Winfield Township, and then grabbed the officer’s male genitals.

On Monday, Delaney blamed Suburban Life Publications for “ruining” Riva’s life. He said in his opinion, Riva’s conviction is not newsworthy because it was for a misdemeanor that did not involve children.

“This man was a priest for over 40 years, and because of a 20-year-old misdemeanor, a crime that involved consenting adults, his life has been ruined,” Delaney said. “This, in my opinion, is not news, it’s slander.”

When asked then whether the diocese condones sexual acts by priests or if Riva’s behavior was acceptable, Delaney declined comment via email.

On Monday, a secretary at St. Scholastica Church’s offices declined to comment about Riva’s resignation, and referred all calls on the matter to the diocese.

Delaney reiterated Monday that the diocese was unaware of Riva’s conviction until it was notified in recent weeks.

While last week he said he was unsure of the diocese’s policies of 20 years ago regarding priests who are charged or convicted of crimes, on Monday he said if a priest commits a misdemeanor offense the diocese’s attorneys do not notify diocese officials. Only when charges are felonies are officials notified, Delaney said.

“We have over 300 priests in this diocese, and a misdemeanor can be anything from crossing the street at the wrong place,” he said. “Misdemeanors wouldn’t even come up in most background checks.”

The diocese does have a new program in place called Protecting God’s Children, which requires all employees of the diocese, including church pastors, to participate in series of workshops designed to teach employees how to act around children in the light of priests who have been accused of child abuse.

While pastors such as Riva would be required to participate in the program, it only focuses on crimes against children, Delaney said.

Police records obtained through the Freedom of Information Act detail the crime, which occurred about 11 a.m. Oct. 24, 1992.

According to police, an officer was “on plain clothed detail” when Riva, then 50 and pastor at Immaculate Conception Parish in Elmhurst, walked past him and into the woods at the West DuPage Woods Forest Preserve. The officer said he followed Riva into the forest before Riva said to him, “Look, there is a deer over there.”

The officer then placed Riva under arrest, according to the police report.

The officer, who no longer works with the forest preserve, does not specify the nature of the police detail he was on that day.

According to documents from the DuPage County Clerk of the Circuit Court’s Office, Riva pleaded guilty to one count of public indecency about one month after his arrest, on Nov. 23, 1992. Documents show Riva paid a fine, received one year of court supervision and had to complete community service as part of the guilty plea.

On Friday, Delaney said the Diocese of Joliet had launched an investigation into the matter, and that Riva did not report the crime to the diocese.

“My understanding is that Fr. Riva paid a fine for this, and that was that,” he said this week. “The diocese was never aware of what happened.”

Riva, who was reached by telephone last week, would not comment on the matter, other than saying he wasn’t sure “why this is in question now, after 20 years.” He added he planned to speak with the Diocese of Joliet. Riva declined further comment when reached on Friday at the church. Other phone calls to church and school officials have not been returned.

Riva was scheduled to retire from active priesthood on July 1 — one month to the day after St. Scholastica celebrates its 50th anniversary. His retirement was planned before the diocese learned of his public indecency conviction, Delaney said, adding that Riva notified the diocese of his pending retirement last fall.

As for the Pastor of the Year award, it’s unclear if the National Catholic Education Association still plans to honor Riva this spring at its annual conference in Boston.

Robert Bimonte, executive director of the NCEA, declined to comment when informed of Riva’s criminal history. Bimonte also would not comment whether the organization would still give him the award. A follow-up call Monday went unanswered as well.

A news release announcing Riva’s award from the NCEA was removed from the Diocese of Joliet’s website last week.