RITE & REASON: THE REPORT on the apostolic visitation reflects an exercise in irrelevancy. The visitors listened but did they hear? The report includes the standard apologies, blame for the bishops and religious superiors, and praise for all the church has done in digging into the clerical culture to determine why the horrendous epidemic occurred. 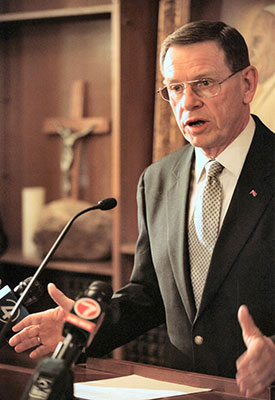 But in reality, they looked for excuses rather than explanations. This “crisis” is not primarily about sexual molestation. It’s about the obsession with power and the corruption and stagnation of the clerical culture.

The visitors were not about to pierce the protective veil that covers the institutional church, a veil that hides the reason the clericalised church is unravelling and the communion between bishops and people is ruptured. The total lack of accountability by the authoritarian model of the church is the root of the crisis.

The Irish people didn’t deserve the insulting claim that the “shortcomings of the past” caused an inadequate understanding of the “terrible phenomenon of the abuse of minors”. The people named the causes head on: the secretive clerical culture, the lopsided theology of sexuality, seminary training disconnected from reality and the “church’s” obsession with control.

These are not the shortcomings of the past. They are the deadly symptoms of the present. A typical Vatican response to a complex problem it can’t understand is imposing structures that change the surface appearance while the core continues to deteriorate. It’s like trying to solve a hardware problem with a software solution.

The outrageous assertion that the bishops and religious superiors gave “much” spiritual and psychological help to victims is followed by a recommendation that they meet with and listen to victims. That this has to be recommended is a pathetic indictment of their lack of pastoral care. If the leadership’s first concern had been the victims and not the church’s image and power, the course of recent Catholic history in Ireland would have been dramatically different.

The visitation of the seminaries avoided the real issue: can priests be prepared to serve in the real world after years of formation in an unreal world? The superficial recommendations try to recapture a seminary culture that inculcated the toxic belief that priests are apart from others because of their exalted “calling”. Survivors know too well this attitude is a major part of the problem.

The second half of the report tells the real story. The agenda is not that of the victims. The true goal is rescuing the Irish clerical institution from its descent into irrelevance by imposing a return to the model of church as monarchy. The “renewed call to communion” is a thinly covered call to docile, unthinking submission.

Catholics in Ireland are walking away not because they need a “deeper formation in the content of the faith” but because they no longer equate faith in God with childish obedience to a clerical establishment that feeds on control.

The younger generation needs the new ecclesial movements as much as a duck hunter needs an accordion. These are nothing more than agents for the return to a model of church dominated by clerical control where intellectual creativity and theological self-determination are anathema.

The abominable legacy of abuse in the Irish church has nothing to do with orthodoxy and fidelity to the pope. It has everything to do with a destructive clerical culture that sacrificed the innocence of children for the distorted image and power of the hierarchy.

The visitors could not delve into the core issue because to do so would have meant recognition of the dark side of the institutional church. The solutions offered – obedience to the hierarchy and lock-step assent to doctrine – are irrelevant and an insult to the victims whose lives were shattered because of this very model of church.

The words and actions of Archbishop Diarmuid Martin – and Taoiseach Enda Kenny’s laser-sharp assessment of the Vatican culture in his speech to the Dáil last July – are proof the real church in Ireland has accurately assessed the situation. The Vatican could have made unprecedented progress in restoring the church’s image by listening and learning.