One person’s disobedience is another person’s act of faith.

Pope Benedict on Thursday re-stated the Roman Catholic Church’s ban on women priests and warned that he would not tolerate disobedience by clerics on fundamental teachings. 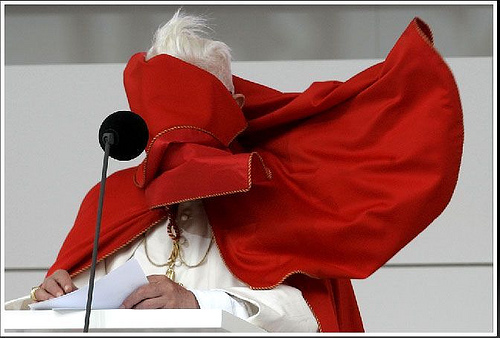 Benedict, who for decades before his 2005 election was the Vatican’s chief doctrinal enforcer, delivered an unusually direct denunciation of disobedient priests in a sermon at a morning Mass on Holy Thursday, the day the Church commemorates the day Christ instituted the priesthood.

The pope responded specifically to a call to disobedience by a group of Austrian priests and laity, who last year boldly and openly challenged Church teaching on taboo topics such as priestly celibacy and women’s ordination.

“Is disobedience a path of renewal for the Church?,” he asked rhetorically in the sermon of a solemn Mass in St Peter’s Basilica on the day Catholic priests around the world renew their vows.

In his response to the Austrian group, his first in public, Benedict noted that, in its “call to disobedience”, it had challenged “definitive decisions of the Church’s magisterium (teaching authority) such as the question of women’s ordination …”

He then restated the position by citing a major 1994 document by his predecessor John Paul II that stated that the ban on women priests was part of the Church’s “divine constitution”.

A year later in 1995, the Vatican’s doctrinal department, which the current pope then headed when he was Cardinal Joseph Ratzinger, ruled that the teaching on an exclusively male priesthood had been “set forth infallibly”, meaning it could not be changed.

The Catholic Church teaches that it has no authority to allow women to become priests because Jesus Christ willingly chose only men as his apostles when he instituted the priesthood at the Last Supper.

Proponents of a female priesthood say Jesus Christ was only acting according to the customs of his times.

The pope, who turns 85 this month, looked tired during the service, his second major event this week after returning last Thursday from a grueling trip to Mexico and Cuba.

In his sermon during the Mass, his first event in the three days leading to Easter, Benedict said that while discussion could be healthy for the Church, disobedience was dangerous.

He acknowledged that there could be concern about the slow pace of change in the Church, but “drastic measures” were not the way to achieve authentic, divinely willed renewal.

“But is disobedience really a way to do this? Do we sense here anything of that configuration to Christ which is the precondition for true renewal, or do we merely sense a desperate push to do something to change the Church in accordance with one’s own preferences and ideas?” he said.

The Austrian group that has demanded sweeping changes is led by the Reverend Helmut Schueller, a former deputy to Vienna archbishop Cardinal Christoph Schoenborn.

The group, which says it represents about 10 percent of the Austrian clergy, has broad public backing in opinion polls and has said it will break Church rules by giving communion to Protestants and remarried divorced Catholics.

Reformist Austrian Catholics have for decades challenged the conservative policies of Benedict and his predecessor, creating protest movements and advocating changes the Vatican refuses to make.

Later on Thursday, the pope was due to wash the feet of 12 priests in a ceremony commemorating Christ’s gesture of humility toward his apostles on the night before he died.