The Slovenian mystery has been solved. Archbishop Uran has been punished by the Vatican not for his involvement in a financial flop but for his infraction of the celibacy rule 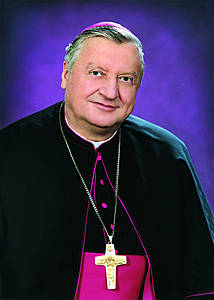 The Slovenian mystery has been solved. Archbishop Uran has been punished by the Vatican not for his involvement in a financial flop but for his infraction of the celibacy rule.

Now the prelate-father will move to the northern Italian city of Trieste. The Vatican has ordered Mgr. Alojz Uran, Archbishop of Ljubljana, from 2004 to 2009 to leave Slovenia because of all the rumours going round about him breaking his celibacy vows and fathering two children, now adults, neither of whom he recognises as his. “This is a temporary measure to calm public opinion until the question is resolved,” stated Andrej Saje, spokesman for Slovenia’s bishops, on Ljubljana’s public television.

“The problem is his alleged paternity, which the former archbishop has always denied, but I think there have been some misunderstandings between him and the Holy See. Once these are cleared up, Uran will be able to return to his country,” Saje added, denying the theory that the sanctions decided by the Congregation for Bishops are linked to the financial scandal which brought the Diocese of Maribor to the brink of bankruptcy two years ago. Uran retired unexpectedly in 2009 (he is not 67) for health reasons after a heart operation, but soon rumours began to spread about him allegedly fathering two children, a fact he apparently kept secret from his Vatican superiors.

Maribor daily newspaper Vecer wrote that “despite the former archbishop categorically denying these accusations, Rome continues to suspect he did not tell the truth, also because he was said to have refused a DNA test.” Saje confirmed that three years ago the Nuncio to Ljubljana launched a procedure to “ascertain whether the rumours were true.” Now Uran is being asked to withdraw from Slovenian public life and “move to Trieste.” Saje added that Uran accepted the decision and once the issue is cleared up “he will probably be able to return home.”

“This is a preventive measure and it is not true that he was forbidden to celebrate solemn masses,” the spokesman added. No one escapes Holy See justice it appears. While the former Archbishop of Ljubljana Alojz Uran and the Archbishop of Maribor Franc Kramberger got red cards when the Vatican issued its second warning, Mgr. Uran has received an exile decree as well. He will have to leave Slovenia. And the reason? His alleged fatherhood. He will only be able to return to the country when the scandal surrounding his person has calmed down.

The former archbishop will be welcomed in one of Trieste’s ecclesiastical institutions. The Slovenian press reported that the Vatican has ordered the prelate to leave his country as soon as possible, at the latest by the end of the year, but it is unclear which part of the Canon Code exactly he has broken. Newspapers are speculating that he is involved in a financial scandal but they do not exclude a child kept secret or an internal clash between Slovenian prelates as the reason. The news has sparked the interest of the media partly because the Holy See rarely decides to take such drastic punitive measures against its bishops, but especially because the underlying reasons for the decision remain unclear. The retired prelate was apparently informed of the decision by the Congregation for Bishops.

The news was revealed by the parish priest of Šentjakob ob Savi, Vlado Bizant, a relative of Uran’s who headed the Archdiocese of Ljubljana from 2004 to 2009. Bizant said that last May the Vatican apparently forbid the former archbishop from celebrating solemn masses, ordering him to leave Slovenia. He added that Uran sees the decision as “unfair” but intends to respect it. The Apostolic Nunciature in Ljubljana and Archbishop Anton Stres neither confirmed nor denied the news, saying they had not seen the content of the correspondence between Uran and the Vatican.According to the newspapers, the prelate’s punishment is imminent and he will be moving to Trieste or to Pula in Istria in the next few months.

However, the reasons behind the Holy See’s decision to punish the archbishop are unknown. Two newspapers, Delo and Dnevnik say it is highly likely that Uran is held co-responsible for Diocese of Maribor’s financial flop. Two years ago, the Italian press revealed that the Diocese of Maribor had made a series of high risk investments in some funds, even going as far as to mortgage a number of churches and using money collected from faithful. After the collapse of the stock exchanges resulting from the economic crisis and the bankruptcy of funds linked to the Catholic Church in Maribor, hundreds of millions of Euros apparently went up in smoke, along with “part of the Slovenian Church’s reputation.”

Others claim that the Vatican did not like the fact that Uran kept quiet about having a child, though this has never actually been proven. Delo newspaper has speculated that the reason for this drastic punishment is the “tense personal relations among the Slovenian clergy.” The newspaper wrote it is unlikely that Uran’s destiny was decided without the current archbishop, Anton Stres and Uran’s predecessor, Cardinal Franc Rode – an illustrious member of the Vatican Curia and a member of the Congregation for Bishops – knowing about it.