The former pastor of a Greenwich church sentenced in July for federal obstruction of justice has reported to a Brooklyn, N.Y., prison, according to the Federal Bureau of Prisons. 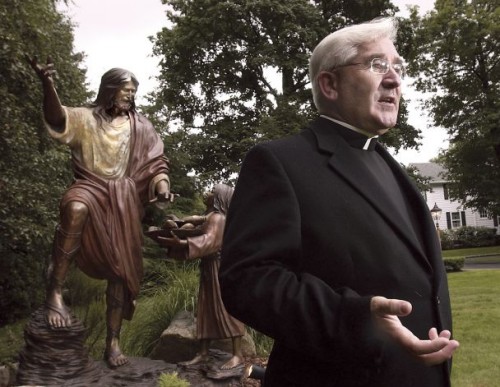 Michael Moynihan, 59, who was sentenced to five months in jail followed by two years of supervised release, is now at the Metropolitan Detention Center.

Located near the Gowanus Bay, the prison is classified as an administrative facility, a type of institution intended for the detention of pretrial offenders, dangerous or escape-prone inmates, or for treatment of inmates with medical problems, according to the Federal Bureau of Prisons.

The Brooklyn facility is capable of holding male and female inmates in all security categories.

Moynihan was to report to prison Sept. 3; a prison employee on Thursday would not confirm when he reported.

Moynihan resigned from St. Michael the Archangel Roman Catholic Church in 2007 amid allegations he diverted hundreds of thousands of dollars in church funds to pay for personal expenses.

He pleaded guilty in December 2011 to the obstruction charge, which stemmed from lies he told federal officials investigating the possible misappropriation of funds.

He met with FBI agents to provide information about how the funds were spent and, in a December 2010 interview, told agents he had not forged a signature on a letter, although he knew he signed another person’s name without the authority to do so, according to the U.S. Attorney’s office.

An investigation by the Roman Catholic Diocese of Bridgeport found in 2008 that Moynihan could not account for church money he kept in secret accounts and engaged in a pattern of deception when confronted.

Moynihan also provided false and misleading information to accountants retained by the diocese, according to the U.S. Attorney’s office.

Though most of approximately $2 million in expenditures from two accounts went toward documented legitimate expenses or expenses that appeared to be appropriate, Moynihan used about $300,000 in church funds to pay his credit card bills, authorities said.

Attorney Audrey Felsen, who represents Moynihan with attorney Mark Sherman, said after Moynihan’s sentencing that about $300,000 has not been accounted for to the diocese’s satisfaction.

Moynihan must pay over $400,000 in restitution to the diocese and must complete 120 hours of community service as part of his sentence.