A New London woman who says she was molested as a child by a now-deceased priest will receive $1.1 million from the Roman Catholic Diocese of Norwich after a retiring Superior Court judge spent his last day on the bench mediating the settlement. 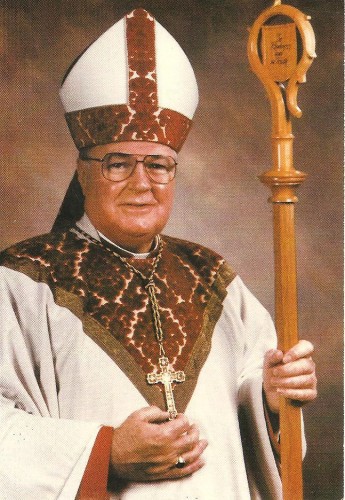 Mary Maynard revealed her identity in court Thursday. She had charged that she was abused by the Rev. Thomas Shea in 1976 when he was pastor at St. Joseph’s Church in New London.

Her lawsuit alleged that diocese officials, including former Bishop Daniel Patrick Reilly, knew that Shea had a history of abuse allegations and moved him from parish to parish.

As word spread in the courtroom Thursday that a settlement had been reached, Maynard turned to face Reilly, who was sitting no more than 5 feet away at the defense table.

“Shame on you,” she said to Reilly, who did not respond and was quickly led out of court.

“Through this whole process he’s been sitting there laughing and I just couldn’t understand that,” Maynard said. “He never apologized.”

Reilly was at Superior Court in Hartford preparing to testify as the first witness in what was scheduled to be at least a two-week trial when word filtered out of Judge Carl Schuman’s chambers that a settlement was afoot.

Superior Court Judge Robert Holzberg, on his last day as a judge, met with attorneys from both sides to iron out the last-minute deal. Holzberg is retiring after 22 years on the bench. Just hours away from attending his own retirement party, Holzberg took the bench in Schuman’s courtroom and presided over the final settlement of the more than 5-year-old case.

Holzberg has gained a reputation as a master mediator after presiding over the settlements of two massive civil cases — the claims made after the Kleen Energy power plant explosion and the claims against St. Francis Hospital & Medical Center related to sexual abuse allegations against former endocrinologist George Reardon.

The judge had previously attempted mediation in the diocese case. Attorneys from both sides decided late Wednesday to try one more time.

“We appreciate you taking time out on your last day of state service to help reach a final settlement in a very difficult case,” New London attorney Robert Reardon, who represented Maynard and is not related to George Reardon, told Holzberg.

Maynard said she was abused in 1976. Reilly was the bishop at that time. Reardon was planning to introduce hundreds of church documents that showed Reilly and others knew that Shea had been accused of abusing girls for many years yet installed him in a parish that had a girls’ school.

“The year I was born was the first time they got a complaint against (Shea). He should have never been able to do what he did to me,” Maynard said.

The diocese had sought a delay in the case, citing publicity from the $60 million fine levied against Penn State by the NCAA following the conviction on sexual abuse charges of former coach Jerry Sandusky, among other reasons. The diocese attorneys argued that the large fine could desensitize jurors in this case or affect potential damages.

Maynard came forward after reading about other cases of sexual abuse by priests.

“I held it in until I was 42 years old because I never wanted my father or mother to ever know what happened to me,” Maynard said. The settlement was “bittersweet.”

“I am relieved in one sense that it’s over, but there is also a great deal of disappointment that the church wouldn’t apologize,” she said.