Molestation victims of Argentine priests say the then-archbishop did not offer apologies or restitution.

Father Julio Cesar Grassi was a celebrity in the Archdiocese of Buenos Aires. The young, dynamic, ­media-savvy priest networked with wealthy Argentines to fund an array of schools, orphanages and job training programs for poor and abandoned youths, winning praise from Argentine politicians and his superior, Archbishop Jorge Mario Bergoglio. 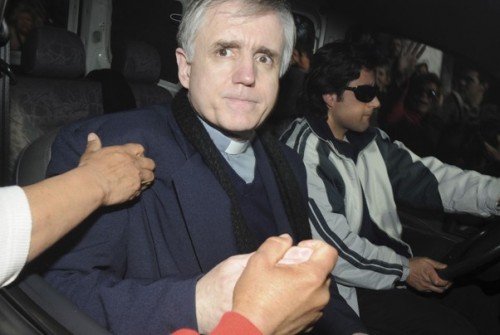 Today, Grassi is a convicted sex offender who remains free on a conditional release after being sentenced to 15 years in prison in 2009 for molesting a prepubescent boy in his care.

Yet in the years after Grassi’s conviction, Bergoglio — now Pope Francis — has declined to meet with the victim of the priest’s crimes or the victims of other predations by clergy under his leadership. He did not offer personal apologies or financial restitution, even in cases in which the crimes were denounced by other members of the church and the offending priests were sent to jail.

Since he was elected to the papacy Wednesday, media attention has focused primarily on Bergoglio’s actions during the “Dirty War” years of Argentina’s military dictatorship. But at a time when the Vatican is facing a costly legal and moral crisis on several continents over sex crimes committed by its priests, Bergoglio’s handling of pedophilic clergy under his authority offers insight into how he might approach the scandals.

There is no evidence that Bergoglio played a role in covering up abuse cases. Several prominent rights groups in Argentina say the archbishop went out of his way in recent years to stand with secular organizations against crimes such as sex trafficking and child prostitution. They say that Bergoglio’s resolve strengthened as new cases of molestation emerged in the archdiocese and that he eventually instructed bishops to immediately report all abuse allegations to police.

In September, after an Argentine priest from a rural area was convicted of abusing dozens of boys between 1984 and 1992, the archbishop’s office released a statement saying the case had “reaffirmed our profound shame and the immense pain that result from the grave mistakes committed by someone who should be setting the moral example.”

But during most of the 14 years that Bergoglio served as archbishop of Buenos Aires, rights advocates say, he did not take decisive action to protect children or act swiftly when molestation charges surfaced; nor did he extend apologies to the victims of abusive priests after their misconduct came to light.

“He has been totally silent,” said Ernesto Moreau, a member of Argentina’s U.N.-affiliated Permanent Assembly for Human Rights and a lawyer who has represented victims in a clergy sexual-abuse case. Victims asked to meet with Bergoglio but were turned down, Moreau said. “In that regard, Bergoglio was no different from most of the other bishops in Argentina, or the Vatican itself.”

The Catholic Church has paid out at least $2 billion in the United States alone to settle abuse claims, according to monitoring groups. In many Latin American countries, though, the scope of crimes has only begun to surface, and in Argentina, no victims have received restitution in public settlements, rights groups and lawyers said.

The case of Father Grassi has been particularly troublesome to children’s advocates here because Bergoglio was widely viewed as close to the young priest, who told reporters before his conviction that he spoke with Bergoglio often and that the archbishop “never let go of my hand.”

Grassi was not expelled from the priesthood after the guilty verdict. Instead, church officials led by Bergoglio commissioned a lengthy private report arguing that Grassi was innocent.

The report was submitted as part of the priest’s legal appeal, which is pending, and prosecutors say the document has helped Grassi avoid jail time so far. A court has granted him a provisional release that allows him to continue residing across the street from the classroom and dormitories of Happy Children.

The sprawling, gated complex in a working-class neighborhood on the outskirts of Buenos Aires once had more than 600 students and resident orphans. It became the economic and religious hub of the community as Grassi channeled private donations into its schools, vocational workshops, bakeries and playgrounds.

Today its classrooms are mostly shuttered. The foundation’s grounds are choked with weeds and uncut grass, its swings are rusting, and its statuary is dimmed by creeping mold.

“He gave with one hand, but he took away with the other,” said neighbor Sabina Vilagra, whose husband worked as a janitor at the foundation and was called to testify in the trial.

“He had his favorites — always boys,” said her daughter, Florencia Vilagra, who also worked at Happy Children at the time.

“He would give them bicycles or toys and would designate one as his special ‘secretary,’ ” she said.

There were three accusers in the trial — given the names “Ezequiel,” “Gabriel” and “Luis” to protect their identities — who ranged from ages 9 to 13 at the time of the abuse, according to prosecutor Juan Pablo Gallego.

One of Argentina’s best-known advocates for child-abuse victims, Sister Martha Pelloni, said she was called in several times to consult with psychologists who treated Grassi’s alleged victims. She said the meetings left her with no doubt that the priest was guilty, despite the church-commissioned report attempting to exonerate him. He was eventually convicted on the charges made by one of the boys. “A lot of Catholics have wanted to protect and defend him,” she said. “But the abuses were real.”

Still, Pelloni praised Bergoglio for evolving over the years and taking an increasingly firm stance against predatory clergy. Argentine law makes it a crime to fail to report allegations of abuse against children. “Now if you go to a bishop with a claim, they’ll say, ‘Report to the police,’ ” she said. “Bergoglio must have ordered that.”

Yet past victims of sexual abuse might have been spared if their cases, too, had received such decisive action, Bergoglio’s critics contend.

In one of Argentina’s most egregious abuse cases, another priest in the Archdiocese of Buenos Aires was assigned to work with children even when church leaders knew of allegations against him.

After local parishioners accused Father Mario Napoleon Sasso of molesting children in a poor, rural province of eastern Argentina in the early 1990s, he was sent to a private rehabilitation center for wayward clergy, La Domus Mariae (the House of Mary), north of Buenos Aires. He lived for two years at the center and was then reassigned to work in a soup kitchen for poor children in a town outside the capital. There, he went on to sexually abuse girls as young as 3.

“His bedroom was adjacent to the cafeteria, and it had the only bathroom in the chapel,” said Moreau, the attorney for the victims’ families.

Moreau said that in 2003 he accompanied two nuns and a priest who had denounced Sasso, along with the victims’ families, to a meeting with the Vatican emissary in Buenos Aires. He said the families were told to be “patient” and were offered gifts of rosaries “blessed by the pope.”

“They just wanted to cover it up,” Moreau said.

Three years later, as the evidence against Sasso mounted, the families asked to see Bergoglio, Moreau said, but they never received a response. Sasso was convicted in 2007 and sentenced to 17 years in prison. He has since been released on parole.

Religious-affairs scholar Fortunato Mallimaci, a sociologist at the University of Buenos Aires, said that as Pope Francis, Bergoglio will face an entirely different set of expectations for how to handle abuse claims. “In the United States and Europe, there is a clear separation of church and state,” he said. “Not in Latin America.” There, he said, civil society is often too weak to take on the power of the clergy, and suspicion falls first “on the accuser, not the accused.”

But, Mallimaci added, “as a bishop from Latin America, he is going to be very sensitive to what is going on in society around him and the politics of the era. If he wants to reestablish the church’s credibility, he’ll be the first to say that no abuse will be tolerated, whether in Washington or Rome or Buenos Aires.”