File under: What a brilliant idea! This same thing worked so well for all of us gay priests.

Me thinks this Father Paul Check guy just wants to be around a bunch of hot and sweaty homo jocks. Hey Fr. Paul, we can totally see right through you. You are scary creepy, just like your predecessor, Father john Harvey, OSFS.

After figuring out that electroshock therapy and gay conversion therapy didn’t really work, a Catholic seminary in Wynnewood, PA has come up with yet another suggestion on how to force grown men into changing their sexuality. You know, because they chose it in the first place.

The organization, run by Father Paul Check, is planning the 14th year of a weeklong Catholic “sports camp,” which will help men to shed their homosexual desires through playing contact sports with other barely-clothed, sweaty, and presumably sexy gay men.

Something smells fishy, and we’re not the only ones that think it. Ed Coffin, a member of Peace Advocacy Network, tells NewsWorks’ Elizabeth Fiedler he plans to protest the annual hookup mecca:s, and hopes to extract the “shame” gay men feel while playing sports with other men. Father Check may be on to something—there aren’t any gay men in major league sports, and if there are, they never win medals or feel accepted.

“It’s very clear what this organization does is focus on turning people who are homosexual–basically trying to change them into heterosexuals or at least get them to live a completely chaste lifestyle–which requires them to not act on any of their homosexual inclinations,” Coffin said. “It falls under the broader realm of conversion therapy. We do feel that this is very detrimental, that’s it’s psychologically damaging.” 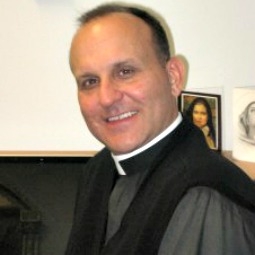 And before you knock it, just listen to the satisfaction it brings men who are no longer interested in other men. This testimony, given by “Louis” on the sports camp’s website, proves there’s absolutely nothing homoerotic about sweaty men hugging other sweaty men:

“One time a teammate gave me a sweaty celebratory hug. He was humbly secure in himself, just as he was, selflessly and joyfully showing affection to others. I also liked when one man, whom I’d felt intimidated by, gave me a pat on my belly, meaning “way to go!” His touch made me feel accepted as one of the guys.”