File under: Francis, The Killer Fruit

Chicago’s Cardinal Francis George has been in the news lately not only for his vocal opposition to Illinois’ marriage equality bill, but because he recently denied communion to a gay Catholic activist at a Mass celebrating the Archdiocesan Gay and Lesbian Outreach in his city.

Robert McClory, a columnist for The National Catholic Reporter, took apart an essay about marriage equality written by George in the Chicago archdiocesan newspaper. McClory exposes some of George’s fear-mongering rhetoric, not only on marriage equality, but also on the issue of religious liberty, which seems to be one of George’s main purposes in writing the column.

For example, McClory is justifiably incredulous at George’s depiction of how secular society is “marginalizing” Catholics. McClory writes:

“George then launches out into the deep about the separation of religious faith from public life. He blames John F. Kennedy for starting a roll down the slippery slope and worries Catholics will be eventually barred from federal judgeships, medical schools, editorial offices at major newspapers, the entertainment world and university faculties.

” ‘If Catholics are to be closeted and marginalized in a secularized society, Catholic parents should prepare their children to be farmers, carpenters and craftsmen, small business people and workers in service industries,’ occupations that ‘do not immediately impact public opinion.’ What?”

McClory hits the nail on the head in his concluding paragraph which points out George’s true blindspot:

“Unfortunately, what Cardinal George cannot consider is the possibility that Catholics at the grass-roots level are coming to understand new and different ways to welcome to the table those previously excluded. Many, including not a few theologians, propose that the essence of marriage is the love and permanent commitment of two persons to one another — period. As that conviction matures in time, I believe the church will have to make accommodations with its implications, just as Christians in the time of Galileo had to reinterpret so much they and their ancestors had taken for granted as irreversibly, dogmatically true: the movement of the earth, the sun, moon and stars. It was for many a painful, revolutionary process. And the one believing Christians face now will be for some no less painful and revolutionary. But it must be done, lest the Catholic church disintegrate into a closed, inconsequential cult.”

McClory doesn’t comment on what I consider George’s greatest errors in his essay. Speaking of marriage equality advocates, George states:

Yet, isn’t that what so many Catholic bishops are doing when they claim that their religious liberty is being curtailed because of pro-LGBT laws? Aren’t they claiming “victim” status? Isn’t George guilty of exactly the thing he accuses his opponents of doing?

The cardinal presided at the 25th anniversary Mass for Chicago’s Archdiocesan Gay and Lesbian Outreach (AGLO), and he was greeted by about 25 protesters from the Gay Liberation Network and the Rainbow Sash Movement (RSM). The latter group is composed of Catholics who present themselves for communion while wearing a rainbow sash, indicating that they believe in the full equality of LGBT people and that they disagree with the hierarchy’s prohibition of sexual activity between person’s of the same gender. When the RSM’s director, Joe Murray, went to the cardinal for communion, he was refused. 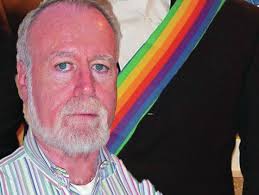 “Murray stood up with his back to Cardinal George during parts of the Mass, and then he went up with the estimated 200 others in attendance to receive communion. George refused him, and Murray walked away with his hands open and empty, showing the congregants that he had been denied.

“But in an emotional show of solidarity, Brenna C. Cronin, who had already received her communion as part of the church choir, went back up and took another communion wafer (called a Host) and brought it to Murray herself.

” ‘One of my brothers, a member of my community, who is a full and equal member of the body of Christ, was denied communion. So I got back in line and I brought him communion, as I would for anyone else,’ Cronin told Windy City Times after the Mass. Cronin, who is a lesbian, has been involved with AGLO for two years and is also a cantor.

The news story indicates that some in the congregation supported Murray’s action, while others were critical of it. You can read the entire news account HERE. It contains additional comments from both George and Murray.