A senior Catholic cleric with connections to the Vatican bank was arrested on Friday for plotting to help rich friends smuggle tens of millions of euros in cash into Italy from Switzerland, in the latest blow to the Vatican’s image. 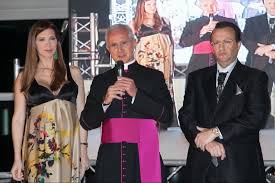 Monsignor Nunzio Scarano, 61, who worked as a senior accountant in the Vatican’s financial administration, was arrested along with an Italian secret service agent and a financial intermediary in a tale that reads like a spy novel.

It involves police wiretaps, a private plane rented to collect the cash from Locarno, burned cell phones, an allegedly corrupt secret services agent who promised to get the money past customs and a shady financier.

Details of the case against Scarano will come as an acute embarrassment to Pope Francis, who, since his election in March, has pointedly eschewed many of the trappings of office and sought to stress the importance of a simple life of devotion.

Only two days ago, the Vatican announced he had set up a commission of inquiry into the Vatican bank, formally known as the Institute for Works of Religion (IOR), which has been hit by a number of scandals in the past decades.

Scarano, who was arrested in a Rome parish and taken to Rome’s Queen of Heaven jail, had hatched a plot to bring up to 40 million euros ($52 million) into Italy for a family of shipbuilders in his hometown of Salerno in southern Italy, magistrate Nello Rossi told reporters.

Rossi is already investigating the Vatican bank for money laundering, and the latest arrests stemmed from that.

Rossi and fellow magistrate Stefano Pesci said there was no indication so far that the bank was directly involved in the attempt to bring the money into Italy, but that the investigation was continuing and more searches were underway.

Scarano is under separate investigation in southern Italy in relation to his accounts in the Vatican bank.

According to Rossi, in July last year Scarano engaged Giovanni Zito, a paramilitary Carabiniere policeman on loan to the secret services, to help him get the money, which was in a Swiss bank, into Italy without tax and customs controls.

The third person arrested was Giovanni Carenzio, a financial broker with offices in Switzerland and the Canary Islands and who was acting as the fiduciary for the owners of the money.

A private plane went to Locarno from Rome and waited several days before returning to Rome without the money.

The cash never left Switzerland because of disagreements and nervousness among the three, Rossi said, adding that cell phones that were used were later destroyed by being burned.

Zito had promised to use his position in the secret services to avoid customs controls. The plane was to have been met on the runway of a Rome airport and the cash taken under armed escort to Scarano’s home in Rome, Rossi said.

Even though the money never left the Swiss bank, Zito demanded the payment he had been promised for his services.

Scarano gave Zito two checks, one for 400,000 euros and another for 200,000 euros. Zito cashed the first check but Scarano blocked the second before Zito could cash it by filing a false report that it had been lost.

Asked if money laundering was involved, Rossi said that would depend if the continuing investigation determined that the original source of the money was criminal activity.

“We are trying to determine the origin of the vast amount of money that was at the disposal of Scarano, who is the holder of several accounts at IOR,” Rossi said.

He said the FIA, the Vatican’s own financial intelligence authority, was following the case and would take action if necessary.

Scarano worked for years as a senior accountant for a Vatican department known as APSA, whose official title is the Administration of the Patrimony of the Apostolic See.

He was suspended from his duties several weeks ago when he was placed under investigation by magistrates in Salerno.

In that investigation, his lawyer Silverio Sica said wealthy friends had donated money to Scarano in order for him to build a home for the terminally ill.

According to Sica, his client wanted to use that money to pay off his mortgage so he could sell a property in Salerno and use the proceeds to build the care home.

Apparently to cover his tracks, Scarano has been accused of taking 560,000 euros in cash out of his account in the Vatican bank and giving various amounts to friends who gave him checks in exchange.

He then deposited the checks into an Italian bank account to pay off the mortgage. ($1 = 0.7691 euros)